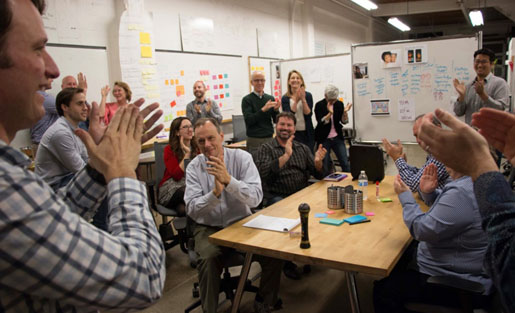 A longer version of this post originally appeared on Medium.

Everything big, started small. Our small startup accelerator got a little bigger.

"We are excited about these new partnerships because they take Matter to the next level."

I am thrilled to announce that Matter is partnering with four new media organizations as we expand our ecosystem to support entrepreneurs and intraprenuers building the future of media that matters. The Associated Press, The McClatchy Company, A.H. Belo Corporation, and Community Newspaper Holdings are joining KQED, Knight Foundation and PRX as Matter’s seven media partners.

This is a powerful set of media partners. More than half of the world sees news from the Associated Press every day. CNHI reaches more than 130 communities throughout the United States. A. H. Belo covers Texas with The Dallas Morning News and other media properties. McClatchy operates media companies in 28 U.S. markets in 14 states and owns iconic brands such as The Miami Herald, The (Raleigh) News and Observer, and The Kansas City Star. KQED has the most listened-to public radio station in the nation and is one of the most trusted brands in the Bay Area. Knight Foundation has leveraged its $2.2 billion endowment to become the leading institution supporting and connecting media innovators inside and outside traditional media organizations. And PRX, named one of the world’s 10 most innovative media companies, operates public radio’s largest distribution marketplace, offering thousands of audio stories for broadcast and digital use, including “This American Life,” “The Moth,” and the “Radiotopia” podcast network.

These new partnerships create a win-win-win for our media partners, for our entrepreneurs, and for Matter.

Yesterday, in my first post in our new Medium collection, “A Matter-Driven Narrative,” I told the story of how founding media partner KQED leveraged the Matter experience to reinvent itself.

As we began to think about expanding our media partner base, the fundamental question was:

If we could do it for San Francisco-based KQED, could we do it for other media organizations located around the world?

We are about to find out.

Our new partners come from all over. The Associated Press is based in NYC, McClatchy is in Sacramento, A.H. Belo is in Dallas, and CNHI is based in Montgomery, Ala. They have media properties spread across the world, but they all have one thing in common:

They embrace the mission and seek the culture.

They are eager to lean into the Matter process to help our entrepreneurs succeed and to help their own organizations transform so that, together, we can build the future of media that matters.

In answering the question of geography, we deconstructed what worked for KQED and realized that geography was not a gating factor. People at KQED are busy. They didn’t just wander in and out of Matter. They planned ahead.

We discovered that the main organizing mechanism of our entrepreneurs  —  The Design Review —  was also being used as the main organizing mechanism for KQED. Our entrepreneurs work in one-month sprints that build up to an event we call a Design Review. It’s where our entrepreneurs fail fast in a safe environment and get feedback from trusted mentors that help shape what they focus on for the next sprint. KQED executives and staff would come to these Design Reviews, be able to experience the process and progress of the companies, and would be inspired to bring that back into KQED.

We’ve decided to double down on the design review with our new partners. They will travel to Matter for monthly design reviews where they will experience the entrepreneurs’ journey and then the next day they will have their own design review or workshop. We are enabling them to go on a parallel journey. With the same program, we can now support entrepreneurs and intraprenuers while creating win-wins between both.

In mid-January, we ran the first boot camp with our new partners, and the impact was palpable. Each media partner flew in a team of three to five executives from their company. They entered our space with a little excitement, a little trepidation, and lots of not knowing what to expect.

After kicking them off with an Introduction to Design Thinking exercise on Monday night, we dove into a three-day intensive design thinking project where their challenge was to built a desirable, feasible, and viable venture that met a deep, unmet need of a young SF Millennial.

They started by hitting the streets and interviewing people very unlike themselves in a process we call “empathy” or “need finding”. These seasoned media and journalism veterans were meeting their future audience for the first time.

Did it intimidate them? No way. It inspired them. It gave them the fuel and the inspiration they needed to begin creating for their audience. While reflecting on his experience here in our Medium collection, Ken Romano from the AP writes, “I felt uncomfortable. And that meant it was working.”

Over the course of three days, they did interviews, synthesized insights, defined a point of view, brainstormed solutions, built and prototyped those solutions, tested them to learn more about their users, and then iterated on those needs and solutions. They then learned what it would take to build their idea. Finally, they made an instant business plan prototype and learned how to make their idea into a viable venture before putting it all together in a pitch. Phew!

It was a whirlwind of a week, but the learning was deep. These are the top takeaways the group distilled from the week:

Impact on our Entrepreneurs

So, the new partnership is a great thing for our partners, but how does it affect our core customer  —  our entrepreneurs?

These seven media partners will be the wind at the backs of our early stage media entrepreneurs. Not only will our startups have access to excellent business, distribution, and strategic investment opportunities, but they will also establish a relationship with experienced media veterans who really get what we are doing and are aligned with our mission. I’m already seeing win-wins develop a few weeks into the partnership.

Our expanded partnership base helps our entrepreneurs in three important ways:

Recognizing win-wins in the application process

But we love creating win-wins if it makes sense for the entrepreneur. So we invite our partners to Finalist Interview Week and create “intentional serendipity.” What happens when our deal flow, idea flow, and talent flow collides with our partners? Do they see a big opportunity to work together? Can a potential partnership between the startup and the media company change the trajectory of the startup? If the answer is “yes,” then we help catalyze that relationship.

We tested this out a few weeks ago when we invited our seven media partners to participate in Finalist Interview Week for the selection of our fourth cohort, Matter Four. The number of win-win opportunities that came up by having seven major media players in the room was remarkable.

We are enabling our startups to establish real relationships with senior executives at these companies. Instead of having a cold, “vendor” relationship that feels like a one-shot sales deal, we help create relationships that enable the entrepreneurs to design with the company. Entrepreneurs get access to deep insights into real problems worth solving and a way to safely test and iterate on their solutions to those problems. The media executives get world-class talent determined to solve their problems for them. Win-win.

We believe in the tremendous impact that VC-scalable ventures can make on the future of media and we will continue to focus on supporting media entrepreneurs that seek a venture capital path. However, we also believe that for the media industry in particular, there also needs to be a path to viability for ventures that don’t fit the particular demands and filters of institutional venture capital.

Some ventures don’t have the potential to be the next Google, and that’s OK. In baseball, sometimes it’s better to have a player that can consistently hit doubles rather than a player that is always swinging for a home run but almost always strikes out instead. And most baseball teams don’t want to wait around for a grand slam moment to be able to win the game.

To put it another way, everyone’s looking for a unicorn when sometimes a thoroughbred will do.

We aren’t in the business of supporting non-profits. There are others better positioned to help them. And we aren’t interested in supporting entrepreneurs who don’t take their future viability into their own hands. This industry needs business model innovation and we are here to support it.

But we are starting to see plenty of ventures that can help shape the future of the media industry that are good medium-risk, medium-reward investments, just not VC-backable high-risk, high-reward ones.

As you can see, we are excited about these new partnerships because they take Matter to the next level. After our initial two year prototype, Matter will continue its accelerator program with an increased ability to create win-wins between media start-ups and industry.

It’s another prototype, this time to test whether we can scale our impact beyond our four walls.

We are just getting started

We now have a total of seven media partners who form a powerful foundation upon which we will build the future of Matter — but we aren’t stopping there.

Matter is the world’s only independent startup accelerator focused on media and we’ve already established a strong community of mentors from across the media, entrepreneurship, and venture capital landscape. We’ll continue to bring on new media partners, extending our reach, increasing our impact, and expanding our partner perspectives beyond journalism institutions to other companies in the media and tech industry that align with our mission and values.

In other words, companies that Matter.

Tomorrow we will introduce you to six startups that Matter. Follow A Matter-Driven Narrative as we reveal the identities of our fourth cohort, Matter Four …

Corey oversees all aspects of Matter. Prior to Matter, Corey built Runway, a pre-team, pre-idea incubator for entrepreneurs at Innovation Endeavors. He also taught design thinking innovation at the Institute of Design at Stanford University, also known as the d.school. Corey began his career in public broadcasting managing the production of 17 films for the PBS/WGBH series FRONTLINE, winning an Emmy and a duPont-Columbia Gold Baton Award. He earned an MBA at Stanford and was a Morehead Scholar at UNC-Chapel Hill.