How We’re Helping Underserved Audiences Serve Themselves with Digital News 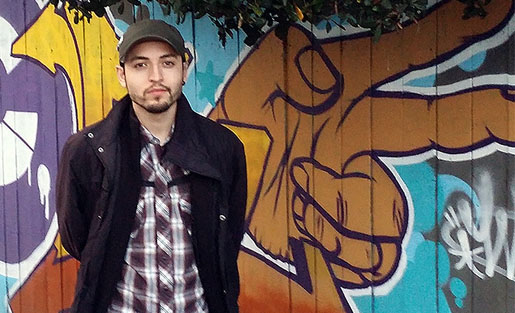 Musician Freddy "Flopez" Lopez of East Palo Alto, who is working as a musician/journalist with EPANow, is co-producing a multimedia story about gentrification. Photo: Jeremy Hay

I’m an outsider trying to work inside a community to launch its own local news organization, the success of which will depend largely on it being organic to the community. I tell people the news service will be here in East Palo Alto. At other times, I say it will be there. I stand in a class of people to whom we are teaching journalism skills, and I veer between, “This will be our news site,” and, “This will be your news site.

You see the contradiction, the oxymoronic nature of my (our) enterprise.

My mission — or challenge, as we term it at JSK — is to improve the media coverage of underserved, low-income communities such as East Palo Alto, or EPA as it’s called. After some iterations, the first expression of this challenge is to start a digital news service, EPANow, that will be a model for a network of similar sites around the state.

The idea of EPANow was hatched in a conversation with some community activists interested in creating their own news service, rather than counting on surrounding media organizations to improve coverage. I was asked, “Why don’t you help us do it?”

From the start, I tried to go with the flow of events, because this was uncharted territory for both me and the people I was working with. We would have to feel our way through. I had never started a local news site and neither had they. We had never worked with one another; I was outside, they were inside.

My vision and their vision: Where’s the fit?

At the same time, I was pursuing a very clear vision of certain news elements the service would offer, of ways we would present the content, of the path it would travel from conception to launch.

This experience has taught me that one’s vision is not a fact, to paraphrase Steve Blank, a Silicon Valley entrepreneur turned educator.

It’s not that my plans and desires have not come to pass — some of them in some ways have, and it is too early to say about others — but I am not in the driver’s seat.

The site is going to be far heavier in video content than I’d first imagined. The logo is not what I had in mind. The tagline for the organization is nothing like I would have suggested. And the organization is emphasizing working with youth even more than I’d originally envisioned.

It’s not that these are unwelcome developments. I believe wholeheartedly in the direction in which EPANow is evolving. The point is that, even if I didn’t agree with these developments, that would hardly matter. The community — principally in the form of my associate director, a professional filmmaker who is an EPA native and has mentored youth there for years, and in the form of the people (both youth and adults) who are learning how to produce our (their) news — has very quickly applied its own vision to EPANow.

In other ways, too, the process has revealed how the community prioritizes itself and its own experience, processes and vision over the experience and vision of an outsider. When I ask for something — even things as simple as, say, the language of an “About Us” section on the website — people I didn’t necessarily see as part of that particular decision had to be consulted first. I have conducted outreach among community leaders and, in the face of my enthusiastic descriptions about EPANow’s potential, often encountered a weary, sometimes dismissive skepticism. That’s understandable.

Communities that have struggled to protect themselves and preserve their vitality against blight, poverty, neglect both benign and active, and, in not a few cases, active disenfranchisement or political, social or corporate aggression, have earned their reserve the hard way. Well-meaning outsiders have a habit of dropping in for a few years and, with little or no perspective, applying their own logic, beliefs and priorities to problems they independently identify, and then withdrawing with little of value left behind.

After months of working in EPA, I think that this applies in a particular way to news. Communities own and are their news — even if they lack news coverage — and feel differently about news organizations than many other institutions. News is the skin, flesh, bones and blood of a community. It reflects a place, influences it, tells, in public, an ongoing story about it. There is a real unwillingness to entrust it to an outsider who has not earned a community’s trust — especially when other news organizations have earned a community’s mistrust.

That’s why it’s imperative that the community take the reins of a local news enterprise from the start — and why I’m so grateful that in EPA it has. I don’t think there’s a chance in hell it would succeed otherwise.

The process has taught me invaluable lessons that I will lean on if, as I sincerely hope, I have the opportunity to work to help other communities create their own news services.

While I am not superfluous to the process, and what I bring to it is important, I am of necessity secondary. Ego has to be set aside to achieve the mission — my role is not even to guide, it is to pitch in and help. And it is vital to operate under an umbrella of credibility from respected local institutions or leaders – in my case, from community activists with a locally-based nonprofit called Live in Peace. Finally, and crucially: A vision for a local news organization is something very distinct from a vision of a news organization for a specific community.

That sounds self-evident, but as I look back and forward, I see my approach in EPA started off leaning toward fitting the news organization I envisioned over the community. It is easy to see what a disaster it would have been had I persisted in that direction. Instead, to the degree that we are succeeding, it is because community members are choosing and adapting elements they want from the original vision, and freely designing others to suit EPA’s style, social processes, organizational and news priorities, needs and desires.

Jeremy Hay @jeremyhay worked as a tenant organizer in the Bronx, as an archiving clerk for the Actors Equity union, and cleaned houses before moving from New York in 1992 to take a job as an office assistant at the Tenderloin Times in San Francisco’s impoverished central city. Soon he became a reporter and, in those 50 square blocks of people who were headed up, down and sideways, he came to love — and feel most useful — reporting on society’s margins. The Tenderloin was a place whose residents were overlooked and neglected even as they strove to survive and thrive, and in the years since, Hay has searched out such places everywhere he has worked. Since 2001 he has been a reporter in Sonoma County at The Press Democrat. He has covered gangs, police and aging. His reporting on globalization helped the newspaper win a George Polk award and he has been further recognized for his reporting on neighborhood poverty, immigration, public sector benefits and an Indian tribe.