How Steve Blank Weaves Entrepreneurship Into Journalism with ‘Lean LaunchPad’ 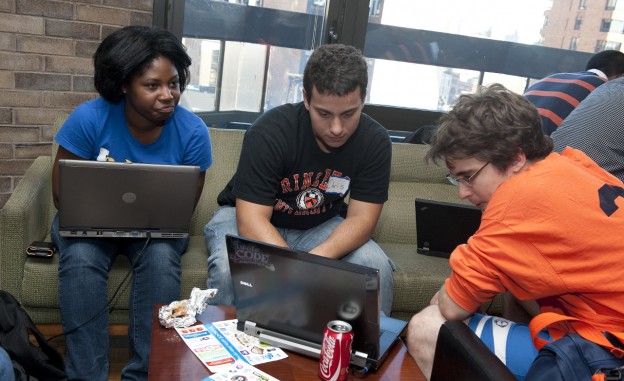 With rapid changes in technology, journalists are working harder than ever to keep up with cutting-edge developments. It can feel like a scary and uncertain time. Yet Silicon Valley veteran Steve Blank says this increased pressure has created room for journalists to occupy the front lines of business model design and consumer development and truly become innovators.

His take isn’t necessarily intuitive. The lines between entrepreneurship and journalism have only begun to break down and many university courses are beginning to weave together the strands of reporting in the public interest as well as breaking ground with technology.

"For students to understand what the future of journalism is going to be, they’re going to have to invent it." - Steve Blank

Cue Blank’s Lean LaunchPad course. Lean LaunchPad is a hands-on class that integrates business model design and customer development into practice through customer interaction and business model iteration. As a retired entrepreneur-­turned-­educator, Blank currently teaches the class at Stanford, Berkeley and Columbia. He also offers a free online version of Lean LaunchPad through Udacity.com which more than 100,000 people have signed up for. EducationShift talked with Blank about his curriculum and why it could be an important addition to journalism education.

Why is it important to integrate entrepreneurial education in journalism education?

Steve Blank: Well, I know I don’t have to tell you that of all institutions that are changing radically, journalism has been affected as much as anything. So if your curriculum looks like the 1990s, you’re essentially teaching outdated material. You need curriculum that, at least in part, teaches journalists that the world of journalism is not only not the same, but it’s changing as we speak.

For students to understand what the future of journalism is going to be, they’re going to have to invent it. It’s a big idea. We don’t know what journalism is going to look like in the next three years, let alone the next 10 years. Being just a reporter is dying breed because there is no such thing as a guy with a little hat that says “press” anymore. It no longer works that way. So, what this has to do with entrepreneurship is that unfortunately journalists also need to be creators of new forms of content delivery for journalism.

Where are the right places to work? And more importantly, how do they turn that into a viable profession? Traditional media no longer pays like it used to. The thing I teach is a model of entrepreneurship that says that all you have on day one is a series of untested hypotheses, which is a fancy way to say that all you’re doing is guessing. If a journalist in my class says, ‘The future of media looks like this, and I’m going to put together a news business that looks like this,’ I would smile and say, ‘Great set of hypotheses. How are you going to test it?’

The traditional answer would have been to raise money and start this business. My model is very different. Rather than raising money, what’s the cheapest way we can run a series of experiments? Can we put together a prototype of what this newsfeed would look like? Can we see if we can get interested readers? Those are called minimal viable products, meaning essentially cheap and incremental prototypes. And the whole process is called the Lean Startup. This allows people who are inventing and trying to figure out what the next generation of journalism will look like to experiment without investing years or millions of dollars.

How is access to entrepreneurial opportunities and resources changing with the media landscape?

SB: In general, it used to be that entrepreneurship and information about entrepreneurship was limited to a very small set of what were called entrepreneurial clusters, or concentrations of entrepreneurs and inter-capitalists—people who gave away money. Those tended to be in places like Silicon Valley or Boston. A couple of things happened in the last decade and only in the last decade. The Internet disrupted traditional media, but on the other hand, it made entrepreneurship available everywhere. When I first started down in Silicon Valley, the ability to get information about how to even figure out how to do a startup was limited by your caffeine intake. Information was transmitted by coffee. And it was coffee only in a certain, limited region with people with knowledge.

Now, in fact, information is everywhere on the Net. So the good news is that not only is information everywhere, but there are meet-ups, incubators and a whole ton of other things that are available for any entrepreneur worldwide. The only bad news is that while entrepreneurship is everywhere, risk capital — funds for high-risk, high-reward ventures — is still kind of clustered, particularly for large-scale capital which is still in small number of cities. Problem two is — and this could be ignorance, but I think it might be a fact — while there are incubators, or places for new entrepreneurs to experiment with medical or hardware startups, I have yet to see an incubator for new journalism startups. And I think that’s an opportunity. That’s what we’re missing.

How can journalism educators incorporate more of this into their curricula?

SB: That’s an interesting problem because journalists are not typically founders of companies, they’re employees of companies. And yet, what we’re describing is that the jobs for many of those employees have gone away. The bad news is most of those who were looking for those jobs are not going to find them, and some small percentage of those who are looking are actually going to turn out to be more creative than just journalists. They’re going to actually be founders of classes of media. That’s not who most journalists are. The same now is true for journalism education. If you’ve been teaching on how to write for a newspaper, that’s not the same class as how to think about how the new entrepreneurial opportunities are in media. So, in fact, it might take new people and it will take new classes. New courses, new thinking will need to go side-by-side. We don’t need to get rid of the old classes; we just need to understand that environment in which journalism used to work no longer exists.

What are some common entrepreneurial mistakes to avoid?

SB: One of the mistakes we’ll make because we’re human beings is to believe that your vision is a fact. That’s the natural optimism of human beings. But the reality is that day one of a new startup is a faith-based enterprise. The core tenant of what I teach is there are no facts inside the building. When we come up with a new idea, we tend to slide into our own reality distortion field to convince ourselves and others. And that’s not healthy. I teach a process to separate out the faith and rapidly turn it into fact as quickly as possible. So it’s OK to start with faith, but the process allows you to test it rapidly.

What advice would you give to educators teaching entrepreneurship?

SB: If you’re a traditional educator, the odds are that you’ve never seen a startup or started one. Therefore, the class is effectively taught best when you pair a traditional faculty member with an adjunct. You really want to have a partner who understands what the real world is like. It’s not a replacement, but truly an adjunct. Anybody who has gotten a journalism degree in the last 10 years is obsolete. Not because anybody is being stupid, but because the industry is changing faster than the curriculum. The question up until now was, then, what should we be teaching? Now we have a curriculum that’s worked across a whole set of industries that easily adaptable and adoptable by journalism, as well.

How do you incorporate real-world experience into your courses (online or otherwise) and why is it important?

SB: Once you come to the realization that we’re just not all going to fit in small offices of the Times or the Journal or the Post, the question is, what do we want to do? How do we get content and how to we run these experiments? That’s where the Learn Startup comes in. It allows us to build very cheap and fast experiments. The class I teach called the Lean LaunchPad has an open-source syllabus and we teach 200 educators each year how to teach it. We’ve yet to see any journalism educators come take the class, but I sure hope that they or their department heads start showing up, because you could easily add this class to a journalism curriculum. The same changes that were occurring with newspapers that occurred in the 20th century are occurring now. So, this class can, and I believe should, be taught as part of any journalism curriculum. I would call it ‘Inventing the New Media.’

View a course summary and syllabus to learn more about the Lean LaunchPad online course.