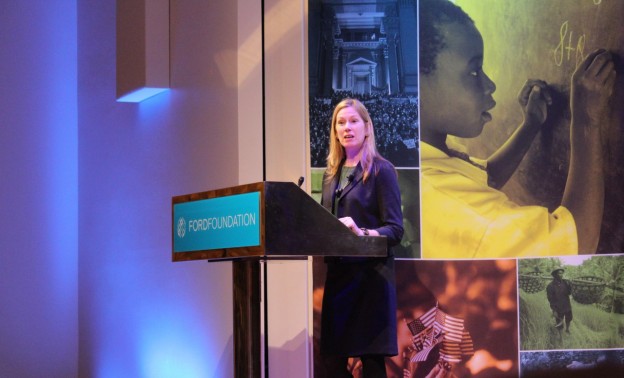 Journalists, entrepreneurs, “intrapreneurs,” funders, storytellers, academics and change agents gathered from locations across the globe at the Ford Foundation this past Thursday and Friday, ready to collaborate.

The Women Digital News Entrepreneurs Summit, “Cracking the Code,” produced by the International Women’s Media Foundation, was not your ordinary digital news event. The women who filled this space were ignited with powerful energy that transformed conversations into action.

"Scale doesn't equal attention or impact. A small-engaged audience that’s listening is more important than more followers because impact is the desired result for news, not scale." -Amy Webb

Crack the Code. Break the Stereotype.

“Connecting mentors with people that are really eager to learn, but they don’t have access, they don’t have money to come to the U.S. for conferences like this, so I try to bring the conference to them … The women go back to their newsrooms and they feel more confident, they feel empowered. So, it’s not just about the technology tools and the process. It’s about the confidence,” she said.

Mariana Santos, founder of Chicas Poderosas and director of interactive and animation at Fusion.

During the “Women at the Forefront: Succeeding in Digital News” panel, Natalia Viana, founder and director of the Brazillian publication Agencia Publica said, “I always say I never wanted to be a women entrepreneur, but we had to invent Publica.”

The publication she was working with at the time would not touch human rights issues nor would they touch any stories that spoke ill of companies or needed additional investigative work.

“Meanwhile people wanted to see these stories and there were a bunch of journalists who really wanted to do these stories, but they didn’t have an outlet. So we put 15 volunteer journalists in a room and [decided to] dig through documents for a full weekend. [We wanted to] put out the stories for free and we did,” she said.

Viana helped bring investigative journalism to Brazil with a new non-profit publication, proof that entrepreneurship and new ideas may be a key to women cracking the code.

During the “Trends for Women In Digital News” panel Amy Webb said, “As journalists you shouldn’t be creating content for the device that people are holding, you should be trying to create the content that makes sense for that person in that moment of time based on whatever it is that they’re doing.”

She gave this example: If the consumer is driving, a longer audio version of the story may make sense. If the consumer is jogging, you could send a text alert, but you also have to consider if it is the first time they’re being introduced to the subject and what they’re thinking about at the time.

Many of the women suggested inviting the audience into the editorial process as a way to engage. Jennifer Brandel is founder and executive producer at Curious Nation, which grew out of the Curious City project at WBEZ. She explained how Curious City asked a question to the public as part of their pitch process. For their assignment process, they curate the pitches and allow the public to decide which questions are best. Then WBEZ investigates the chosen questions alongside the person who asked it, creating multimedia stories in the process. Plus, Curious City publishes via social media along the way to continue engagement.

“The multiple entry points into the process give journalists value at every feedback point, and audience feedback creates new beats,” Brandel said.

The project closes the distance between audience and reporter by bringing them together face-to-face, breaking down walls and making the journalist more of a service provider.

Jessica Lessin, founder and editor-in-chief of The Information, said, “The news business model is broken, and the vast majority of publications depend on advertising. That’s causing a race to the bottom on the quality of content.”

So the question for journalists is: How do you write something they have to read? Lessin believes consumers will pay for good content. The Information is a subscription-based service and focuses on stories that their audience, professionals in tech and finance, have to read and aren’t getting elsewhere.

“The definition of success for the news business should be set by the entrepreneurs, businesses and leaders in the news industry,” Lessin said. Publishers should measure success based on stories that create actionable intelligence and move the needle on social change — rather than just audience size and scale.

“Scale” is a word Amy Webb said “should be banished from the content and news business world because it’s measuring the wrong thing.”

“Scale doesn’t equal attention or impact. A small-engaged audience that’s listening is more important than more followers because impact is the desired result for news, not scale,” Webb said.

Find all of the program speakers here.

Women gather to brainstorm ideas at the hackathon.

After the summit, Bloomberg News hosted a reception where there were more opportunities for networking followed by a late-night brainstorming session for Friday’s Hackathon. The day-long Hackathon was evidence of what women can do when collaborating. Journalists, coders, designers and entrepreneurs created groups and worked on web applications and apps that aimed to resolve big issues for women in news media.

All of the participants worked tirelessly from 8 a.m. until 6 p.m. and presented dynamic presentations at the end. Each group received feedback from the judges before the winners were announced. The projects were judged on usefulness, creativity, user-friendliness and technical difficulty.

Google awarded $10,000 in prize money for the winners.

Other projects included: MentHer, an app that pairs young women with successful women in digital news as mentors; Juno, a website that empowers women to find the ideal workplace for their lifestyle; Inherently, a digital platform that allows forward thinkers to showcase their ideas anonymously; Impala, an app that connects women with the latest media jobs curated by experts in the industry; and Open Ripple, a news platform that allows organizations and businesses to track their impact.

We left the event inspired and ready to get to work.

Kimberly Selden works with the PBS MediaShift events team and is a freelance television and live event producer. Kimberly is also a social entrepreneur, starting her own non-profit that focuses on using media for social change with a concentration on developing countries suffering from the digital divide.