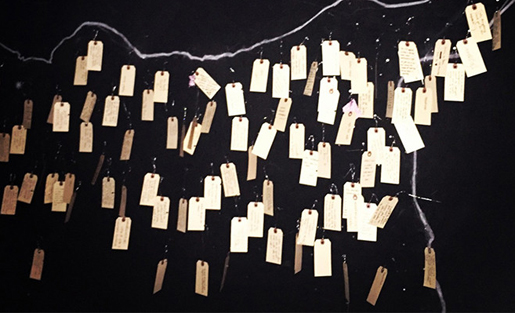 Going to this year’s Sundance Film Festival’s New Frontier exhibition hall on virtual reality, you couldn’t help but feel as if you were seated at the front row of the future of journalism. It’s a new world of immersive media and experimentation. And even though they are not specifically talking about journalism, it is all applicable to any form of storytelling.

For example, Interlude Video is using eye-tracking machines to enable users to narrate their own story in a music video. Think interactive video + storytelling. Futurist Ted Schilowitz is experimenting how to break the rectangle in the digital movie experience. And then there are the number of virtual reality exhibitions including that of the Iranian 1979 Revolution and Project Syria, which both stole the show. Even experiences on a smaller scale such as sitting across from Reese Witherspoon in the middle of the Pacific Crest Trail from the movie “Wild” evoked a different kind of movie viewing experience by using Samsung’s VR Gear.

"Storytellers across all mediums are trying to use gaming technologies and virtual reality in ways to create empathy with users, while also offering them an opportunity to be a part of the storytelling experience."

Storytellers across all mediums are trying to use gaming technologies and virtual reality in ways to create empathy with users, while also offering them an opportunity to be a part of the storytelling experience.

There was no better example of that then Project Syria, a virtual reality experience, directed by Nonny de la Peña and built by a team of students at the University of Southern California. The project was first exhibited last winter at the World Economic Forum in Davos, Switzerland.

I had the opportunity to step inside and experience this alternate world — a country, I should mention, I have been to on several occasions.

Immediately, I am transported to a street corner in Aleppo, Syria. There are people passing through the street. At one point, it almost seems as if a man is about to pass through me. The experience is unsettling. It startles me. I try to look around to get a bearing of my surroundings. You can feel like something is about to happen. The center of the scene is a group of people standing in a circle listening to a girl singing.

And then a bomb explodes, and I too, scream and leap back horrified at the event I have witnessed. Where is the girl that was just singing? She is gone. I forget that I am not standing in the streets of Aleppo. I forget about the heavy virtual reality goggles and headphones I am wearing that took me time to adjust and focus. I am there.

It’s only seconds later that I am now transported to a refugee camp, where I watch as men and women and their children try to buy rations of food provided by international donors. I can’t help but to look behind me in the tent at the stockpile of food and hope that it actually gets to those most in need.

My reality is then switched to a third and final scene. This time I am standing in a desert. One by one children appear. There are tents behind them. They are all looking at me. Each one of them. I turn to the right and quickly back to the left and there are more of them. I can barely count them all. Each is faceless, and perhaps that’s the point, because in each of them I see myself.

Donna Borak has never shied away from asking a question. Drawn to the study of cognitive science and philosophy as an undergraduate at Lehigh University, she was captivated by trying to understand how the human mind worked. It was that innate curiosity and passion for writing, however, that ultimately brought her to Boston University to pursue a masters’ degree in journalism. Seizing on an opportunity to come to Washington, D.C., for a semester, Borak began as an intern at United Press International, quickly landing a full-time position in 2004 on the business desk before graduation. Two years later she was hired by The Associated Press to help create a business desk in Washington. There she covered the defense industry during the Iraq and Afghanistan wars. Borak has most recently covered the aftermath of the financial crisis and the 2010 financial reform effort as the Federal Reserve reporter for the American Banker. When she’s not on deadline, you can find her in a yoga studio practicing her headstand, and quietly pondering her next big question.

This post originally appeared on donnaborak.com and on the website of the John S. Knight Journalism Fellowships at Stanford University. The Knight Fellowships foster journalistic innovation, entrepreneurship and leadership. Each year, 20 individuals from around the world get the resources to pursue their ideas for improving journalism.