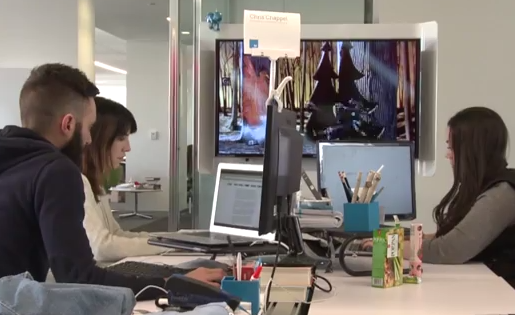 Mashable staff at work. The news site's goal is to present stories that are ahead of the conversation, its editors say. Screenshot courtesy of RJI.

This week we visit Mashable’s New York City headquarters to find out how the staff stays on top of the fast-moving social conversation.

Started as a tech news site in 2005, Mashable now delivers breaking news and other social media-friendly content tailored for what it calls “the Connected Generation,” attracting as many as 40 million unique visitors per month. The site has made extensive use of platforms like Vine and Snapchat to interact with its audience, and for most of its history was fueled by a profitable business model as opposed to outside investment capital, which began flowing in last year.

Managing Editor Jonathan Ellis and Deputy Managing Editor Amanda Wills say the key to meeting their mission is a team-oriented culture combined with an ability to predict viral hits.

Executive Editor Jim Roberts joined Mashable after more than two decades at the New York Times and has “imbued a sense of old-school focus on covering the news, while still experimenting with how stories are presented,” according to this in-depth article from Nieman Lab.

Mashable has heavily experimented with the 6-second video app Vine since the app launched in early 2013. Mashable Producer/Creative Jeff Petriello tells us how his team uses the platform to inspire creativity and to generate revenue this previous Futures Lab update.

For an overview of Mashable’s experimentation with Snapchat, check out this post from Mashable Production Assistant Dasha Battelle.

As Chief Technology Officer Robyn Peterson explains, Mashable’s proprietary system, called Velocity, “crawls the web, categorizing content it finds into topical areas, and then collects as much data as it can on how people are sharing and interacting with the content, and by analyzing that data, predicts how viral each story will become.”