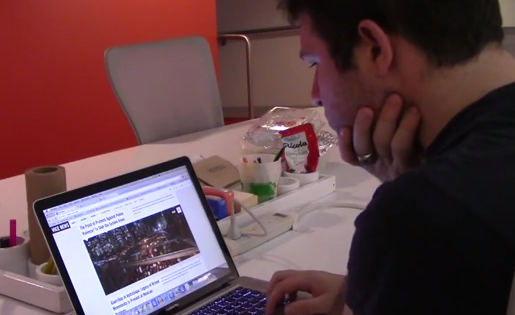 Vice Media attracted $250 million in investment last September. It and other digital startups like Vox and BuzzFeed are attracting more and more funding from venture capitalists. Screenshot courtesy of RJI.

This week we find out why investors are bullish on online media startups, and we find out how the Philadelphia-based startup Billy Penn is producing local news coverage aimed at younger readers.

"Right now the millennials are trying to find the appropriate voice for them, and Vice is that voice. And I think one of the things that millennials love about Vice is its authenticity." -- Woody Marshall, general manager, TCV

Digital media startups like Vice, BuzzFeed and Vox Media have grown quickly thanks to hundreds of millions of dollars of venture capital. We find out why investors are so willing to bet on these new companies instead of putting their money into established news providers.
Reporting by Tatiana Darie.
[To skip directly to this segment in YouTube, click here.]

A look at the numbers:

Billy Penn is a startup news operation in Philadelphia that aims to provide local, mobile-friendly news specifically for residents under age 35. We learn from the site’s editor, Chris Krewson, how they hope to attract a younger audience with a mix of curated news and social content.
Reporting by Katy Mersmann.
[To skip directly to this segment in YouTube, click here.]

As this article from Nieman Lab explains, Billy Penn is “developing a voice for the site that’s punchy and direct,” which has included “some kitschy things, like live-tweeting a gubernatorial debate in emoji, a weekly Spotify playlist that chooses songs to summarize the week in news, or a bracket to determine the Ultimate Philly Thing.” The article also profiles the genesis of Billy Penn and provides a more detailed explanation of the organization’s internal workings.

As CJR points out, Billy Penn is part of a batch of news-related digital startups being launched in a city that has seen several previous attempts eventually shut down.