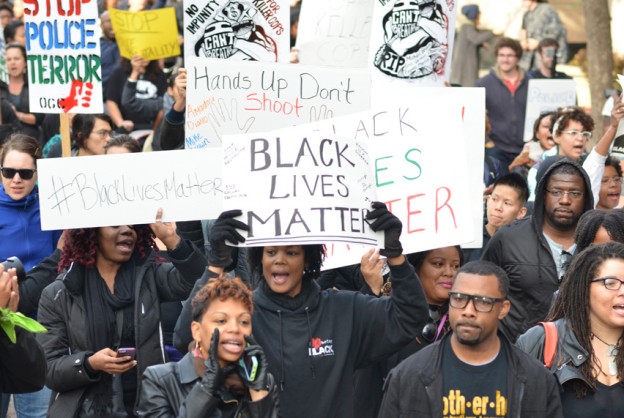 By this time next year, all year-end roundups will be written in emoticons. However, because letters and words are not yet obsolete, here is a round-up of notable social media happenings written in the lines, swirls and dots that are still the tools of our trade.

"Was I annoyed by all of the ice bucket videos? Totally. Can I admit that this was a genius idea that contributed to much needed research? Absolutely."

Certainly there will be hashtags and happenings that you found to be more important than these. Feel free to share around the campfire in the comments section.

Nothing exciting occurred on social media in January. Not one thing. Except for people complaining about the weather (and Crest and TGI Fridays capitalizing on it.)

I love my daughter. I will always protect her. A lot of ugliness is going to be aimed at me. But this is not about me, it’s about her truth.

In February, Dylan Farrow wrote an open letter in the New York Times about being molested during childhood by Woody Allen, the then boyfriend of her mother, Mia Farrow. Allen responded the following week, also in the Times. Mother Mia tweeted about it; brother Ronan tweeted about it; Stephen King tweeted about Mia’s tweets — nope, that didn’t make sense to me when I first read it either — and later apologized for it. At the end of the day, no matter what the truth is, no one won in this situation.

In March, everyone on Facebook was focused on wishing me a happy birthday; everyone on Twitter was RTing Oscar host Ellen DeGeneres’ sponsored Oscar selfie. Not sure that anything else happened. I had a cold, I think.

In April of 2014, an Islamist militant group kidnapped nearly 300 schoolgirls from Chibok, Nigeria. Soon, the world started tweeting with the hashtag #BringBackOurGirls. Hollywood celebrities got in on the act; Washington, D.C. celebrities got in on the act. Rumors were bandied about attributing the hashtag to a compassionate soccer mom in California, but a “heat map” of #BringBackOurGirls tweeting activity showed that it started in Nigeria.

Unfortunately, the very cool interactive graphic only focuses on tweets between April 23 and May 6. A brief history of Boko Haram, the group responsible for the kidnappings and an estimated 4,000 deaths to date, shows that the group may have been around since the ’80s, that their first known attack occurred in December of 2003, that up to 100 more females have been kidnapped since April, and, despite American troops being sent in response and Boko Haram being placed on the U.N. Sanctions list, those original 270+ girls have not been delivered home.

Although there are discrepancies about who actually started the Ice Bucket Challenge (this is becoming a theme, isn’t it?), an awareness campaign aimed at spreading the word about ALS (amyotrophic lateral sclerosis, also known as Lou Gehrig’s Disease) invaded the hearts and minds and Facebook pages of millions last summer. The task: those nominated for the challenge (publicly and overwhelmingly on Facebook) had 24 hours to share a video of themselves being doused with ice cold water (and nominating others for the same challenge) or face the penalty of making a donation to the cause.

Naysayers argue that this challenge was vainglorious and cloying and that the majority of the participants didn’t contribute money to the cause. However, the ALS Association reported over $100 million in donations in 2014, a significant increase over the $19.4 million donated the previous year. Was I annoyed by all of the ice bucket videos? Totally. Can I admit that this was a genius idea that contributed to much needed research? Absolutely.

Michael Brown, an unarmed black teenager, was shot on August 9 in Ferguson, Mo., near St. Louis, by a very armed, white cop. Residents took to the streets and frustrations spilled via tweets, assisted by hashtags such as #Ferguson and #HandsUpDontShoot. Protests intensified on November 24 when a grand jury decided not to indict the officer responsible for the shooting. Interestingly enough, the Ferguson prosecutor stated that reactionary fires were fanned by “non-stop” social media.

Sadly, Ferguson wasn’t the only opportunity for social media to band together around racial issues this year. In December, #ICantBreathe was used to express anger and disbelief after a grand jury declined to indict the police officer who’d held Eric Garner in a choke hold that led to his death in July. People took to Twitter to talk about the death of young Tamir Rice, about the death of Renisha McBride. People talked about Black Twitter. (Sometimes even in real life.)

A larger, more encompassing hashtag was created, #BlackLivesMatter. For once, I know where the hashtag came from.

In August, a relationship dispute between video game developer Zoe Quinn and an ex-boyfriend escalated into targeted online harassment riddled with sexism and misogyny. This evolved into the hashtag on this list that, I think, rolls most easily off the tongue this year: #GamerGate.

Similar harassment (ranging from doxing to death threats) was levied at game developer Brianna Wu (who was driven from her home after getting doxxed), actress and gamer advocate Felicia Day (who got doxxed for expressing her fears that she might get doxxed), and feminist media critic Anita Sarkeesian (who had to cancel an event at Utah State University after someone threatened to carry out the largest mass school shooting in history if she appeared.)

Here, Sarkeesian talks about #GamerGate on The Colbert Report.

In addition to #BringBackOurGirls and #GamerGate, several other lady-focused hashtags rallied the troupes and demanded attention this year (at least on Twitter.) Actress and U.N. Women Goodwill Ambassador Emma Watson (of Harry Potter and Bling Ring fame – shut up) gave a speech launching the U.N.’s #HeForShe campaign, which basically invited men to join the fight against world-wide misogyny by promoting a softer, kinder, less man-hate-y version of feminism that everyone could live with. Except…not everyone could live with it.

Some (self-proclaimed alpha males, presumably) dismissed #HeForShe as just a way for “sex-starved beta males” to get laid; still others (perhaps more progressive, diversity-focused feminists) disagreed that the white, straight actress was the right face for a United Nations campaign. Then people were up in arms because 4chan allegedly threatened to release nude pictures of Watson in response; then it was revealed that the 4chan plot was a marketing ploy; then people forgot about #HeForShe altogether and started shopping for their sexy nurse costumes for Halloween.

For the record, the #HeForShe hashtag wasn’t Watson’s idea: it was this woman’s.

The #illridewithyou hashtag trended during a hostage situation in Sydney. A Muslim man was found to be at the center of it, and Australians feared a backlash against those who wore traditional Muslim attire. Since a raising of the national terror alert level in Australia, Muslims had been faced with increasing physical and verbal abuse , and non-Muslim Australians wanted to signal their faith in their neighbors and a pride in living with, and riding public transportation next to, Muslims in Australia.

Not all were sympathetic to this outpouring of support; still others were confused about which event the hashtag was connected to. A fair amount of American tweeters used the hashtag to not only reference the Sydney attack but the horrifying Taliban school massacre, as well as other recent terror attacks.

Just a few weeks earlier, a video clip of comedian Hannibal Buress casually referring to Cosby as a rapist had gone viral, and a string of new alleged victims was coming forth claiming to have been drugged by Cosby, sexually assaulted by Cosby, or both. The memes created were crass and unflattering, to say the least, and the gimmicky trick was removed from Cosby’s site (and from his related social media accounts) pretty quickly — almost as fast as a pudding pop melts in the sun, but not nearly as fast as Netflix, TV Land, and NBC distanced themselves from Cosby.

Elizabeth Lauten, communications director for Rep. Stephen Lee Fincher, R-Tenn., didn’t like the demeanor of the Obama daughters at the annual Turkey Pardoning, and she said so on Facebook: “Try showing a little class…Dress like you deserve respect, not a spot at the bar.” Before you’d had your last leftover turkey sandwich, Lauten resigned. If you don’t have anything nice to say…definitely don’t say it on Facebook.

Since you’re still here, I have a present for you. (Don’t worry: we likely just met. I didn’t expect you to get anything for me.)

My personal favorite social media moment this year came from singer/songwriter Neko Case. In May, Playboy honored her by including her on a list of bad-ass women rockers. She expressed, in a very unladylike fashion, that she’d prefer to be included in a list of musicians rather than a patronized subset. When another tweeter admonished her for her ungratefulness, Case’s response was: “Don’t Peggy Olsen me, m*****fuckers.”

For me, this is a perfect, tweetable, teachable — tantalizingly tattoo-able — moment.

Julie Keck is a social media consultant and filmmaker based in Chicago. She has spoken about social media engagement, crowdfunding, and film at SXSW, the University of Notre Dame, Columbia College, DePaul, the Chicago Documentary Film Summit, the Chicago International Film Festival, and more. Julie is also the social media and newsletter editor for MediaShift. Play with her on Twitter at @kingisafink; she’ll play back.