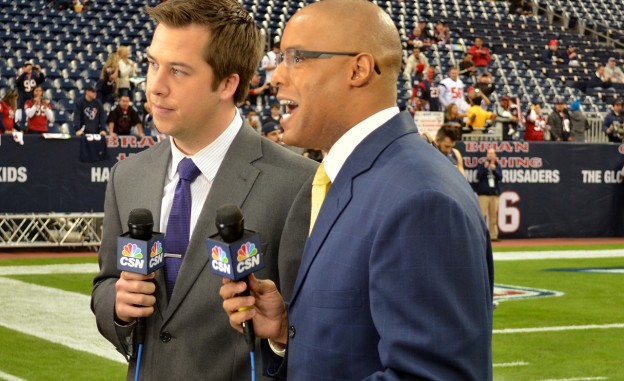 Photo by Karen on Flickr and used here with Creative Commons license.

Earlier this fall, the National Football League delivered body blow after body blow to itself.

From video of a star player punching his partner to public relations pummelings, one could assume this popular American sports league would be down for the count.

Sports media professionals have to care because they still must act as agents of progress.

That is simply not the case.

According to a recent NBC News/Marist poll, nearly 90 percent of NFL fans polled said recent incidents of domestic violence –- and the subsequent handling of those incidents –- will not change how much football they will watch.

However, one group has to care: sports media professionals.

Sports journalists want to see the action and report on it, but if the only action they are qualified to analyze is the kind between the lines, we have a serious problem.

I suggest three ways to do this:

How many times have you assigned sports as a beat in a journalism class and the student is ready to cover a few practices and games of HomeTeam U? After turning in a game recap and a feel-good story about Star X, the student is at a loss as to what to cover the rest of the semester.

Breaking news eliminates the monotony of a beat. But once the breaking news dissolves into difficult-to-report, time-consuming analysis, students often don’t have have time and return to the minutia of sprained ankles, coaches’ press conferences and the advance-game story-notebook routine.

If sports journalism students’ first experience with a beat is devoid of this monotony, maybe they are more resistant to falling in line once they enter the profession.

Let’s start by not letting a sports team be a beat for class and suggest the student cover an issue related to the entire department instead. Maybe it is gender issues and athletics. Or, perhaps it is law, university policy and the athletics program.

This forces students out of the routine and into a completely different mindset. The student must identify complex story ideas, conduct difficult interviews, analyze public documents, consider different forms of media for presentation and still search for feel-good stories not found in press releases.

Journalism students at Quinnipiac University work in teams for an entire semester to create a common website from which to tell a variety of stories related to one broad topic. Photo by Molly Yanity.

It also guides students to think unilaterally about a topic that sustains their attention for a long period of time.

It forces them to care.

Imagine if a major news outlet assigned a reporter to the NFL & off-field issues beat. The stories would be diverse, informative, ahead of the breaking news curve and serve a real purpose in society outside of fantasy football.

Sports media professionals have to care because they must act as agents of progress. Students must be exposed to the role the media have historically played in social advancement.

Would civil rights issues moved the scale of the public conscience if the media had not documented and analyzed riots in Birmingham beyond the eight days in May 1963? In sport itself, would performance-enhancing drugs still be as pervasive as they were in the 1990s and early 2000s without media scrutiny? Would an abused woman’s pain be noticed if not for an elevator camera capturing it?

Without constant reminding by a good professor of the power of good journalism, a sports journalism student will bend more toward fan than watchdog.

When students are covering beats, help them identify and analyze the historical context of the issue — whether it be an examination of Title IX, an introduction to athletes like John Carlos or Muhammad Ali, or even medical analyses of concussions and other injuries.

This kind of context provides students with intellectual tools to effectively cover their beat for class, as well as in the profession.

It also extends their attention span and forces them to use the historic threads of sport and society to tie together current events.

3. Introduce Reasons To Care – And Repeat Them

Despite the need for savvy investigative reporters and relentless watchdogs, there are many issues working against the notion that the modern sports journalist will hold an entity like the NFL accountable.

The first is opportunity.

As the students in my Reporting for the Web class discussed the graphic video of Baltimore Raven Ray Rice striking his fiancée, it dawned on their professor that the majority of them would end up working on image repair for entities like the NFL, as opposed to the breaking, reporting and analyzing of the story itself.

In a presentation to faculty, Quinnipiac University School of Communications dean Lee Kamlet reported from a recent alumni survey that 84 percent of his 2013 graduates got jobs in communications fields. For my students, that means both sports journalism and sports marketing and PR.

Few of my students, though, will ever make it into investigative reporting roles because legacy media are eliminating them or the will choose a different route.

The second issue is good, old-fashioned conflict of interest.

Many mainstream media are not anxious to expose the underbellies of profitable juggernauts like the NFL or the local college athletics program. First, this hard-hitting reporting doesn’t sell to the fan base. Second, the relationship between the media and sport is impossible to untangle with the prevalence of billion-dollar multimedia contracts and sponsorships.

Despite these hurdles, educators have a responsibility to prepare sports media professionals to fully understand the issues –- and inspire them to care.

The only way educators can do that is to offer future sports media professionals a critical approach to the arena, a realistic vision of the obstacles they face and a vivid look at cultural history.

We also do that by presenting great journalism that is making a difference, like Kate Fagan’s piece on Brittney Griner facing homophobia in ESPN.com’s “Owning the Middle” or Paul Solotaroff’s “Gangster in the Middle,” a Rolling Stone feature on Aaron Hernandez.

These stories get to the heart of coming out, and gang culture, and obsessive youth sports, and chasing dreams, and the public’s role in financing sports. The list goes on.

Millennials –- despite their perceived short attention spans –- want to make a difference. This is how we help them.