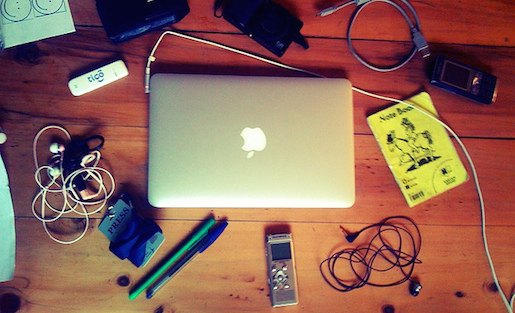 “Mobile journalism is … not something you’re going to succeed at super quickly,” Richardson said recently in a Knight Center for Journalism in the Americas Massive Open Online Course (MOOC) on the practice. Mobile journalism is a process with a learning curve, she said.

“Really good MOJOs are fantastic at shooting and editing on the fly.” -Allissa Richardson

Richardson trains youth to report the news using only smartphones, MP3 players and tablets. She is also creating an online video tutorial platform that will teach people around the world how to become mobile journalists, or “MOJOs,” in conjunction with her Harvard Nieman Foundation Fellowship. The site will launch this month.

In her years of working with students, both in the United States and abroad, Richardson has come up with a list of seven basic steps that can streamline the process of effective mobile journalism. These tips can also be used by people in traditional newsrooms or the nonprofit space. She explored each step, summarized below, in the recent Knight course.

In mobile journalism, the research element isn’t wildly different than it is in traditional news reporting, where journalists head into the field once they “have a hunch or an assignment,” Richardson said. In the wake of the Arab Spring revolutions, Richardson was invited to Morocco to train local women to become MOJOs across the country. Due to the potential for danger in the streets, Richardson and her team conducted extensive research beforehand, in order to know where they could safely go.

They used Twitter to triangulate where the unrest was occurring, as well as FourSquare and Google Maps. “We did the research before we even left, so we weren’t wandering around aimlessly with these shiny devices,” she said. “We knew all the time exactly where we were going and what we were looking for.”

If you think mobile journalism means you’re off the hook with writing, think again. “A lot of my MOJOs … think they’re going to use these devices and they’re going to go out and cover really cool things,” Richardson said. “And when they find out there is still writing and planning involved, they groan.” But writing is crucial to the process.

Her advice: After doing background research, MOJOs should prepare pictorial or written depictions of how to approach the story. That may be a list of potential people to interview, followed by a list of establishing shots. Once you know what images you are going to shoot and some shots you will need, you can write those elements down in boxes and create a basic shell of a story. Then, when you head out into the field, you can look for ”clear, succinct sound bites” to fill out the story.

Richardson puts these two steps together because “really good MOJOs are fantastic at shooting and editing on the fly.” That means they don’t wait until they get back to the office to cobble together a story; they do it right there in the field. With the right software on your mobile phone, you can shoot, add lower thirds, create voiceovers, incorporate nice transitions and more, Richardson said. “Shooting and editing is essential if you’re going to be a MOJO who is fast and accurate,” she said.

After a day spent interviewing people on the streets, it’s hard to keep track of who you spoke to and where exactly your interviews took place. Plus, reporting can often become chaotic, especially in large crowds or far-flung places. While Richardson was in Mohammedia, Morocco, she and her participants “crisscrossed the city” doing person-on-the-street interviews and “spent more than four hours outside just talking to anybody who looked interested.” Then, when they were ready to edit, they couldn’t remember exactly where they had been. “If we hadn’t geotagged [the] exact location, we’d never know where we were once we got back,” she said. “Geotagging is essential as a MOJO, because you’re always going to be on the move.”

After years spent working with students who are used to simply “dumping their data” on Mac desktops, Richardson said she’s learned that storage is “really, really important.” She recommends a cloud storage solution, to store audio and video while in the field without having to worry about going back home to place things on a desktop, plus an external hard drive. “Storage is very important if you’re going to be a mobile journalist,” Richardson said. “Things happen and things get lost, and you don’t want to be the one who had the exclusive and now it’s gone.”

While Richardson was in Morocco, she was surprised to learn that groups of females don’t traditionally convene on the streets together. So when preparing to head into the streets with her female trainees, Richardson and the participants let people know they were on their way. “We tweeted, using the hashtag #girlsonthestreet, so they knew we were coming, and they knew that we were [g]oing to be using these devices,” she said. With Twitter, Richardson and her trainees were able to let people know what they were doing and reporting on. “Whenever we were out, we would share the hashtag with people, so they could find our content very easily,” she said. “Because there’s nothing worse than coming up with a great story that no one reads or views.”

For information on software for mobile journalists, see:

Jessica Weiss is a freelance journalist based in Bogotá.