3 Lessons from the Hack the #GenderGap Panel 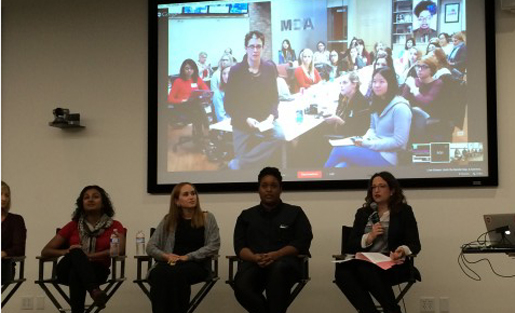 It’s no secret that there’s sexism in the tech world. Many of us have grown up looking at (and then bumping our noggins against) the glass ceiling, nodding our heads in recognition when we hear stories about brogrammers, lecherous bosses, and women being passed over for jobs, raises and promotions simply for the offense of having two X chromosomes. Just this week Jennifer Berdahl wrote in the New York Times about how the hyper-masculine culture of tech “drives away valuable talent and fresh perspectives.”

In an effort to combat all of this, about 80 women (and a handful of male allies) gathered at Google for an all-female panel focused on issues unique to women in tech. The event was live-streamed, and served as the kickoff to the Hack the Gender Gap hackathon starting on the other side of the country in Morgantown, W. Va., at the WVU Reed College of Media.

"Even though estrogen levels were high, this #GenderGap discussion was far from a nerdette version of Lilith Fair."

Attendees spanned all levels of the tech industry, from fresh college grads and budding entrepreneurs, to seasoned veterans of major tech companies.

At least one attendee turned down a ticket to a World Series game to attend. According to Máire Walsh, “There are not many opportunities to go to an all-woman panel in media or tech, apart from the Exceptional Women in Publishing conference. I think it’s very important for women to be visible to each other.”

The coinciding hackathon (in West Virginia) and panel (in Mountain View, Calif.) were the brainchild of Dana Coester and Maryanne Reed of WVU Reed College of Media. Both events were co-produced by PBS MediaShift, as well as WVU. Additional support came from Google and the Ogden Newspaper Seminar Series at Reed College of Media.

The esteemed panel, moderated by digital futurist Amy Webb of Webbmedia Group and Spark Camp, included Valerie Aurora, co-founder of the Ada Initiative, Laura Michelle Berman, co-creator of Melon, Tasneem Raja of Mother Jones, Jane Schachtel of Facebook, and Aminatou Sow of Google & co-founder of Tech LadyMafia. Anna Holmes, founder of Jezebel and currently of Fusion, was originally scheduled to attend but had to cancel.

You’re invited to watch all 1 1/2 hours of the panel here; below are some of my key takeaways.

Right off the bat panelists discussed the vicious harassment being directed at Anita Sarkeesian, Felicia Day, and others in the course of GamerGate, which Valerie Aurora called “a convenient label for something that’s been going on for many years.”

Aminatou Sow minced no words when she said, “A lot of it seems like Sexism 101 – when is this going to stop?” Sow also reminded the crowd that while Sarkeesian, Day, and others are being painted as radical women, they’re not: “They’re just women who held opinions.” If it can happen to them, it can happen to you.

Both Tasneem Raja and Sow pointed to articles like the one by Kyle Wagner in Deadspin as a “silver lining” of this situation. Sow added, ““The first thing that I did when GamerGate was happening was call my congressman.” Webb mentioned PopVox as a great way to interact with your legislators about issues such as GamerGate.

Fear also popped up in the discussion about egg freezing and the recent criticism of Facebook and Apple for adding the procedure to their health package. Aurora said that the conversation is “tapping into a source of great fear and unhappiness for women in their careers. Careers in Silicon Valley are not very compatible with women’s current societal expectations.”

“Everyone has an opinion about what you’re supposed to do with your time and your body,” added Aminatou Sow, “whereas those are very personal conversations.”

Moderator Webb and attendee Kara DeFrias (former White House Innovation Fellow and senior manager of Innovation & Brand Experiences at Intuit) both expressed surprise at the backlash, sharing that, for different reasons, they had both faced the realities (and very real costs) of fertility treatments.

For DeFrias, who was diagnosed with uterine cancer at 34, having immediate access to IVF was imperative: “My first thought was not that I had to save myself; it was that I had to save my eggs.” She continued, “It’s hysterical that we spend our teens and twenties praying that we get our period, and then we spend our 30s and 40s praying that we don’t.”

Of course, the fact that this was even up for debate, about whether or not the offer of egg freezing services as a benefit is demeaning, is a privileged discussion. Sow observed, “We are very privileged here.”

Directness was an overwhelming theme in the salary discussion, and no one was as direct as Sow:

“I’m a shark when it comes to salaries. I know what I want to make. I know how I want to live. It takes a lot to talk me away from those numbers.”

Attendees Meghann Farnsworth of the Center for Investigative Reporting and Jeanne Brooks of Hacks/Hackers and New/s Disruptors brought up the compounded difficulties of negotiating salaries for positions that are new to a company (and perhaps new to the field.) Sow recommended doing a fair amount of research before heading into salary negotiations and having a firm grasp on what you bring to the table. “You should be really confident about what your worth is in the workplace, and you shouldn’t budge on that.”

Brooks further recommended being upfront about your salary requirements to give companies “a chance to strategically plan how to invest in you.”

Aurora added: “Do not ask women what their salaries are, because depending on their race, they’re making 50% to 80% less than men are: Ask white men.” Aurora shares more in this handy guide for negotiating salary.

3. As a woman, support other women

Women in tech can feel like they’re reinventing the wheel, trying to fit their lady-shaped pegs into dude-shaped roles. Comments from panelists and attendees alike indicated that there are some overwhelmingly universal experiences of frustration and worry for women in tech. But there can be strength in numbers.

About confronting harassment related to GamerGate and beyond, Jane Schachtel advising speaking up as a group: “The only power we have is in our numbers and in our voices.” Aurora pointed to the Geek Feminism Wiki as a place to find advice for uncomfortable, sticky, or dangerous situations.

Regarding gender-related salary disparities, Tasneem Raja brought up Ann Friedman and the theory of horizontal loyalty, or creating connections between yourself and others at similar stages in their careers. Sow took it a step farther: “You need to kiss down and not up … You guys are going to employ me someday.” She was talking directly to the hackathon participants which include almost 50 college students, including one eighth grader.

Aminatou Sow of Lady TechMafia (left) discusses how to be inclusive.

Of course, it’s not just about improving tech workplaces for women. “When you look at spaces where there are no or few women, I can guarantee you that there are no or even fewer people of color,” said Sow.

At the end of the evening, after the livestream with the WVU hackathon ended, the Gender Gap panel attendees and speakers participated in “Speed Sharing,” a networking conversation exercise developed for Webb’s Spark Camp. The goal was to meet a couple of fascinating people and work out a few career kinks.

I had the opportunity to meet an inspiring group of women including: panelist Valerie Aurora, who shared a wonderful career counseling resource; a journalist trying to move into the tech field; a veteran at a large tech company who is looking around, seeing no one over 50 at her company, and wondering about her own next steps; and a fresh college grad who’s just formed her own social justice design company rather than following another more traditional path. We had brief and intimate discussions not just about job history and skills, but about desires for new opportunities, worries about change, and excitement about new challenges.

At the end of it all, at least one person was set at ease: “Fear has a way of subsiding when you are surrounded by smart, funny, and successful women with common goals, ” said Máire Walsh.

Here’s a quick guide to topics discussed in the livestream of this panel:

Julie Keck is a social media consultant and filmmaker based in Chicago. The bulk of her film work is created for tellofilms.com, a niche video site, for which Julie serves as the Chief Creative Officer. She has spoken about social media engagement, crowdfunding, and film at SXSW, the University of Notre Dame, DePaul, the Chicago Documentary Film Summit, the Chicago International Film Festival, and more. Julie is also the social media and newsletter editor for PBS MediaShift. Find her on Twitter at @kingisafink.