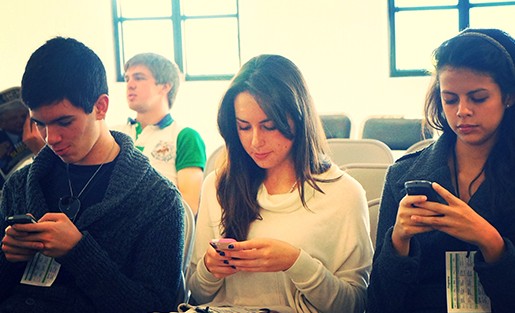 Social media platforms and cell phones are playing increasingly important roles in how people are accessing information about politics and election news, according to a new Pew survey. Photo by Esther Vargas on Flickr and used here with Creative Commons license.

A new national survey by the Pew Research Center released this week found that social media platforms and mobile phones are playing increasingly important roles in how people are accessing information about politics and election news.

Compared to the 2010 midterm elections, the percentage of people who are using their phones this year to track the campaigns has doubled, from 13 to 28 percent. The proportion of Americans who are following candidates and other political figures on social media has also increased substantially, from 6 percent in 2010 to 16 percent this year.

“This is a cohort of highly engaged voters who are using social media to connect directly with candidates." -Aaron Smith

The survey found the growth in these behaviors for both Republicans and Democrats, and across all age demographics, but it occurred most sharply among 30- to 49-year-olds. In 2010, only 6 percent of people in this age bracket followed political figures on social media, and 15 percent of them tracked political news on their cell phones. This year, the numbers are much higher — more than a fifth (21 percent) of them are now following politicians on social media, and around 40 percent of them are regularly using their cell phones to stay up-to-date with politics.

Aided by different online tools and outreach projects, social media has become an extension of traditional campaigning and awareness-building across age groups, the survey found.

“In terms of the uptick in digital politics by people in the 30- to 49-year-old age group, there are a number of possibilities [why] … but clearly increased usage/adoption of various technologies among that group has a lot to do with it,” Aaron Smith, the author of the Pew report, told PBS MediaShift in an email interview.

A report from the Wall Street Journal found that since July, “more than 20 million Facebook users” have been posting, commenting or messaging about the midterm elections in some way.

Facebook also placed a banner on top of U.S. users’ feeds on Tuesday to remind them about the elections, indicate their nearest voting precinct and encourage them whether to share if they’ve voted. “The shareable ‘I’m a Voter!’ message, which Facebook calls a ‘megaphone,’ is designed to stand out from the regular News Feed fare,” CNN reported.

Twitter also featured special Election Day coverage on its site at https://election.twitter.com/ — its #Election2014 dashboard — where users could follow the different political conversations and candidates.

The report also found that voters using various online methods to stay informed tended to be highly engaged in other ways as well. They were more likely to follow government and current affairs on a regular basis, volunteer their time to a candidate, contribute to a campaign, attend an event and encourage their friends to support particular causes.

“This is a cohort of highly engaged voters who are using social media to connect directly with candidates — helping them form more personal ties, giving them direct access to events as they happen on the campaign trail, and facilitating their involvement with the campaigns that they care about,” Smith told PBS MediaShift.

Getting Out the Vote

The Pew report found a few reasons Americans turned to their cell phones and social media to follow the elections — among them so that they could know the political news first before others, as 41 percent of the survey respondents said, or feel more personally connected with the candidates (35 percent).

For others, however, the “social” aspect of social media is intrinsic to why they use Facebook, Twitter and other social media.

Jennifer Wong, a web developer based in San Francisco, for example, said she spends much of her time researching candidates and campaigns on her own rather than relying overwhelmingly on social media for information.

“Mostly it’s keeping track of what other people I respect have to say about races/candidates/campaigns,” she wrote to PBS MediaShift in an email interview. “From social media, I think I’ve formed a slight bond with people that I know have the same political leanings as me. I also (think I) know who’s active in researching certain issues, and whose opinion I can trust.”

Twenty-six percent of respondents to Pew’s survey said getting “more reliable information” than they could from traditional news organizations was a major reason why they used social media.

Wong, who considers herself politically active, said social media is also useful for bringing more awareness to people in her network, even if she’s not communicating with them directly.

“If nothing else, my friends/family/acquaintances will at least recognize something I’ve mentioned — then maybe that’ll spark some interest for them,” she wrote.

You can read the details of the complete Pew Research Survey on cell phones and social media use during political campaigning here.

Sonia Paul is a freelance journalist based in India, and is the editorial assistant at PBS MediaShift. She’s on Twitter and Instagram @sonipaul.