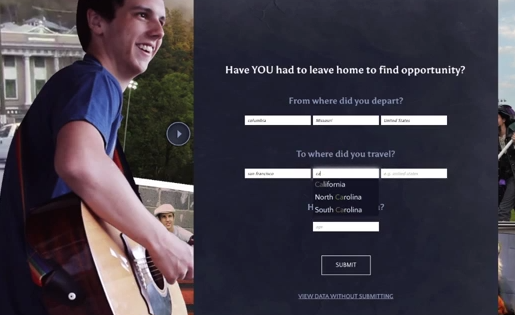 The interactive documentary "Hollow" forces users to become participants in the story, and has them input their own information like so, to see where their lives stand up against those they're watching. (Screenshot courtesy of RJI Futures Lab)

This week we explore how documentary video and interactive technologies can be combined to tell new kinds of immersive, in-depth stories online.

"The first question is, 'Who's our audience?' And the answer can't be everyone." - Kainaz Amarya, supervising visuals editor, NPR

This Emmy Award-winning project, created by NPR, raised more than half a million dollars via Kickstarter to travel the world and document how T-shirts are manufactured. The resulting interactive documentary allows viewers to smoothly transition from watching video segments to reading text, photos and graphics. NPR’s supervising visuals editor Kainaz Amaria explains the team approach used to build this kind of immersive project.
Reporting by Tatiana Darie, Reuben Stern and Rachel Wise.
[To skip directly to this segment in YouTube, click here.]

The NPR Visuals Team also develops data-driven tools and shares the code for others to use, including the source code behind the T-shirt project.

“Hollow” is a multi-storyline experience that examines the future of rural America by focusing on a single county in West Virginia. Director Elaine McMillion Sheldon tells us how the project involves the audience via multimedia elements and integration of social media tools.
Reporting by Tatiana Darie.
[To skip directly to this segment in YouTube, click here.]

More information about the project:

As MediaShift reports, the original plan was to make a documentary and not an interactive project, but the director “realized there was more information she wanted to present than could be conveyed in a traditional documentary.” She also saw the interactive format as a way to enable to community to continue documenting their own story after the filmmaker left.

“Fort McMoney” is documentary game that allows viewers to build player profiles and influence the course of the story, which is based on a real-life community in Canada. Director David Dufresne explains how the project simultaneously entertains and informs.
Reporting by Tatiana Darie.
[To skip directly to this segment in YouTube, click here.]

And for even more information: