Finding Success at the Women’s Hackathon for Wearables at WVU 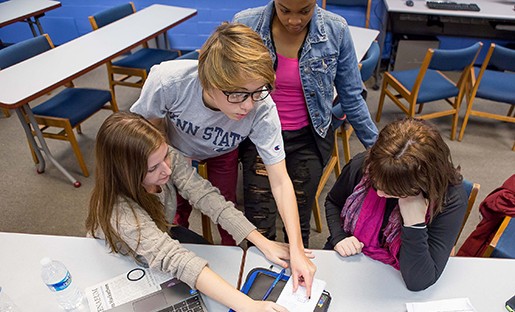 Students at the "A Women's Hackathon on Wearables" had 36 hours to develop a start-up technology around wearable devices. Photo by David Smith/Reed College of Media.

We were nearly halfway into the Women’s Hackathon on Wearables, and one of my team members blurted out: “Our idea isn’t going to work.”

I was mentoring a team of six women at the hackathon, and we’d been working under a tight deadline that started at 8 o’clock that morning. We settled on a problem to solve, and we thought we had our solution. Then came this objection. We had just listened to a presentation by Hilary Topper, a commentator on wearable technology, who promoted wearables as useful tools for journalists.

"The whole idea of accelerating your thought process, being creative, being open, learning from your mistakes and coming up with solutions quickly is a radical departure from the typical academic process." -Maryanne Reed

My initial reaction to our team member’s objection was a bit of shock. Surely we hadn’t gone through all of the problem-solving work that morning for nothing. But I saw the benefit to being challenged. “This is good,” I said. “Let’s stop and listen.” We dug in, and in the end this reflection and discussion made our final concept stronger.

We were one of eight teams at the Hack the Gender Gap women’s hackathon on wearables at West Virginia University’s Reed College of Media, co-produced by PBS MediaShift. Each team had a facilitator and was given the challenge of creating a start-up use for wearable tech that solves a problem relevant to the media industry.

More than 50 women from WVU and other universities including Penn State, Howard, Syracuse and Carnegie Melon participated in the weekend event that kicked off with a symposium at Google of women leaders in the technology industry. Through Google+ Hangout, the symposium was streamed live, with two-way interaction with the hackathon participants in the College’s new Alexis and Jim Pugh Media Innovation Lab in Morgantown, W.Va.

The symposium covered #gamergate, the pay gap between men and women, and whether tech companies should provide benefits for egg freezing. It was a frank discussion from women leaders in technology, and it launched a weekend focused on helping women influence technology development. See a Storify recap of tweets shared during the symposium and hackathon here.
Women make up more than half – 57 percent – of professional workers in the U.S., but they hold about one quarter of the professional computing jobs that exist, according to the U.S. Bureau of Labor Statistics.

Numbers among college females tell a related story. In 2012, more than half of all college graduates were women but less than 20 percent of these female graduates were majors in computer and information sciences, according to the National Center for Women and Information Technology.

These stats and the growing presence of digital technology in daily life and the job market show there is a true technology gender gap. That is one reason WVU’s Reed College of Media decided to host a hackathon for just women.

A female-focused hackathon is a relatively new concept. Microsoft Research and other organizations sponsored the third International Women’s Hackathon earlier this month. Traditional hackathons tend to be male-dominated, making them less accessible and welcoming to women.

“This is a soft entry for women to venture into that realm without necessarily having the hard coding skills,” said WVU Reed College of Media Dean Maryanne Reed. “The idea is to give a hunger for learning more.”

Beth Laing, PBS MediaShift events coordinator, said this hackathon was different than others MediaShift has produced in the past, in part because of the all-female environment.

“I think the atmosphere, it’s so much more comfortable. They don’t feel like they’re going to put themselves in a bad position by asking a question, be thought less of,” Laing said.

Dana Coester, assistant professor at the College of Media and creative director for the College’s Media Innovation Lab, wanted the hackathon to focus on wearables, because she says women still have an opportunity to influence this emerging market.

“It’s about shifting people from being consumers, sort of a set thing, to being makers,” said Coester. “Hacking, you know there’s pejorative connotations of the word, but it’s also about making it your own, making it do what you want it to do.”

The hackathon included short Ignite-style presentations on topics such as design thinking, entrepreneurship and the latest trends in wearable tech. But the majority of the time, participants worked in teams to develop a new use case or solution for wearables, such as Google Glass, the Apple Watch, and even Fitbits. The challenge was intentionally a bit vague.

“After we issued the challenge, I thought there would be a dazed, uncertain look, but people shot out the door essentially to get going, and we haven’t seen people since,” said Coester.

When my team set off to begin the challenge, I encouraged them to first think of problems they’ve encountered in daily life.We then wrote anything they came up with on a board. Next we looked for themes within the list of problems.

Once we completed this step, we allowed ourselves to start brainstorming solutions. It was important to not rush through any step of the process to allow the best ideas to bubble to the top.

My team escaped the confines of four walls for fresh air as they continued working on the idea outside. I left them alone there while I gathered sound for a story I was producing for public radio on the event.

When I rejoined the group a little later, they had solidified their idea and were planning their pitch. My team came up with a wearable targeted to educators. Combining a hands-free wearable that records voice with an app that searches academic databases, teachers and students could then search for scholarly and news articles related to class lectures.

In hindsight, it was ambitious and probably too detailed. Simpler ideas seemed to gain more traction. We didn’t win (more on that later). In fact, our idea failed; however, if I were grading this team, they would certainly receive an A. The idea-generating process they undertook and the collaborative effort they adopted from start to finish exemplified the environment that’s best suited for innovation.

A lesson on teaching innovation

Walk into any class or meeting and tell people they need to be innovative, and they may sit up straight and take note, but they probably won’t know exactly how to translate that into their daily work.

Innovation is not a hard skill one can teach or acquire. It’s a shift in thinking. It’s an acceptance that you will fail and that’s OK as long as you learn something from that failure. That’s the environment that was created at the hackathon.

Reed said the event was a great exercise in solving problems quickly that could be applied to a variety of fields.

“The whole idea of accelerating your thought process, being creative, being open, learning from your mistakes and coming up with solutions quickly is a radical departure from the typical academic process,” Reed said.

And the winner is…

In the end, all teams successfully completed the challenge: from idea generation by thinking about problems around women, wearables and media, to creating “solutions,” to finally pitching their idea to a panel of five judges.

All of the ideas were different, although a majority focused on wearables and apps that would help women better monitor their health. Only one group developed something that applied specifically to journalists.

The winning team’s concept was an attachment to the popular Fitbit wearable.The BioBit would measure biomarkers, such as vitamin D, iron, and hormone levels. Judges told the creators to seek a patent on their innovation immediately. There was no monetary award, but the winners will receive a platform from MediaShift to share their concept and access to a network of women technology leaders.

This hackathon was focused on the process, not on the product, with the goal of helping participants understand how to develop and present their innovative ideas. WVU student Katie Heller said she now has more confidence in her ability to generate ideas for new media technology.

“I think that when women get in an uninhibited environment, then we do amazing things, and this really showcases our ability.”

More than confidence, Coester hopes the event sparked interest in wearables and that the young women who took part in the Hackathon will continue to think about wearable technology as something they can have a hand in creating.

“I honestly hope that by bringing these women together at this particular age, that this is something now that they will begin to develop as an expertise,” Coester said.

Emily Hughes Corio teaches journalism at the West Virginia University Reed College of Media. She joined the faculty as a Teaching Assistant Professor in 2011 after working ten years in public media. In April 2014 she received a Broadcast Education Association’s Festival of Media Arts “Best of Festival” award for a story she produced for NPR’s “All Things Considered” on the restoration of a the Cheat River after years of mining pollution.