What Are Digital Rights After Death in the Networked Age? 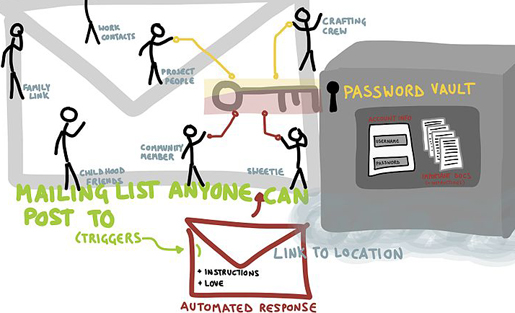 Early this year, yet another friend of mine up and died. There was of course a mess of things that had to be figured out. It wasn’t just the traditional things of cleaning out her house (I wasn’t around for that part) or figuring out the funeral (Viking in variety). It was the new and interesting technical and moral turmoil of getting into her hard drive, questions of “should we even?” — her prolific music and authoring contributions rivaled by her extreme privacy.

It was seeking the edges of her far-flung pockets of Internet community to notify them personally, racing the deluge of social media notifications, not wanting them to find out about her the same way I found out about my grandmother – before the familial phone tree had reached me, a peripheral friend calling me based on a Facebook post from my sister. A morbid seismic wave.

"While I don’t have any control over how others plan for (or don’t) their demise, I have a say over my own."

While I don’t have any control over how others plan for (or don’t) their demise, I have a say over my own. I can show my care for people dear to me my own compulsive, facilitating way by being sure they find each other as they find out, and in making sure information and knowledge I have to offer continues to be released under open access, even if I’m not there to do it. From doing humanitarian and disaster response (and just a general “awareness of the abyss,” as my mother used to tell my vast and angry younger self), I have had to face the looming possibility of my own death head-on.

The networked reality that brought those strange new questions and moral quandaries for my friends’ deaths can instead be used to carry forward care and knowledge. This is a sort of guide for the bits of postmortem planning the Internet and most lawyers have missed. It’s not complete – I’ve run into some interesting blocks and quirks, around which I’m eager to collaborate with others.

It’s called NetworkedMortality, and it needs your help with continuing to build it out. It includes some methods of Shared Secret for passwords, storing instructions in password vaults, and mailing lists for notifications of far-flung internet social groups. But it still needs to be fleshed out around how to best shut down accounts while archiving meta data for posterity and research, how to donate a body to open access science, and more diverity in threat and failure models. Read more about it here.

Willow Brugh is an organic chat client, spanning a multitude of subcultures and putting like-minded (but differently disciplined) people in touch. Many of these connections are made at events she co-organizes and facilitates like Random Hacks of Kindness, SpaceApps Challenge, Konbit Technologie (the first hackathon to ever take place IN Haiti), H4D2, and #EveryoneHacks. She is a co-founder and current board member of Jigsaw Renaissance, a learning and making community in Seattle; co-founder and past director of Space Federation, linking together hacker and maker spaces; and current director Geeks Without Bounds. GWOB is an accelerator for humanitarian projects, and deployed with the FEMA Innovation Team for Hurricane Sandy response. 2013 brought the new adventure of researching how decentralized groups scale at MIT’s Center for Civic Media. Find this robot just about anywhere as willowbl00.