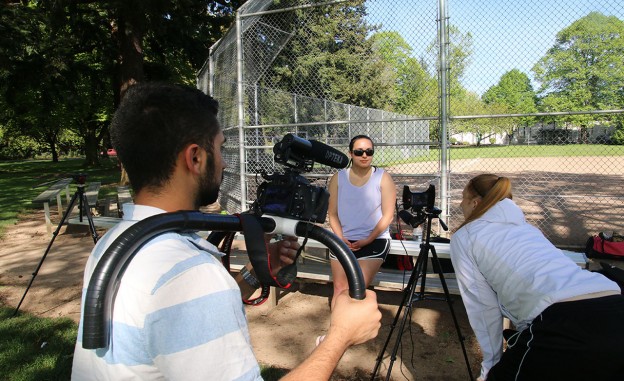 Reality television is rarely referenced as a resource for pedagogical insights. However, the genre’s success warrants a closer look as administrators seek new and affordable ways to train educators how to teach digital skills. We know that character-driven narratives have the power to engage and captivate viewers. Reality shows are a hyped-up hybrid of the documentary art form. However, in authentic documentaries the stories aren’t concocted, they are real.

How might legitimate documentary storytelling techniques be used to more effectively train teachers and students?

This is the question that drove our development of Digital Skills Workshop, a new, free online resource for secondary-level educators who want to introduce digital storytelling in their curriculums as a way to address new Common Core State Standards that relate to media and technology. The project chronicles our team’s work at Roosevelt High School in Portland, Oregon, often listed among the state’s most challenged schools.

Effective teacher training is among the most significant obstacles to advancing digital literacy through public education. Many students come to school with mobile devices that are either banned or ignored as potential tools for learning. Two barriers exist: disparities in access to technology, and minimal training and support for teachers.

Broad initiatives seek to outfit the entire nation’s public classrooms with new technology. In February, Apple and Adobe pledged $100 million and $300 million respectively in technology support for the Obama administration’s ConnectED program, which seeks to bring 99 percent of America’s schools into the digital age. However, without adequate training, these and other substantial investments could fall short of their intended goals.

Apple Distinguished Educators have created a series of downloadable resources, and Adobe Education Leaders offer numerous online tutorials through Adobe’s Education Exchange. They are thoughtfully prepared and clearly presented. However, most tend to talk about teaching rather than show real teacher-student interactions in the classroom.

My participation in both Apple and Adobe educator groups and my work as a research professor led me to experiment with some fresh approaches to teacher training. I study the intersection of media, education, and technology, and specifically how journalism can be a resource for secondary-level teachers. New Common Core State Standards, adopted by 43 states, represent an exceptional opportunity for journalism education that is largely unacknowledged by policymakers and journalism professionals.

At a time when the journalism profession faces great uncertainty, journalism education stands to benefit from the Common Core State Standards. Why? A close reading of the English language arts guidelines reveals that they call for an unprecedented shift in the ratio of student exposure to nonfiction texts. By 12th grade, the target mix should be 70 percent nonfiction versus 30 percent fiction. The Standards also stress the importance of media fluency and new technology skills. Journalism is a readily accessible resource uniquely aligned with these objectives.

These aims represent a dramatic shift for English language arts educators, who are more comfortable teaching the classics and other fiction-based works. Use of new technology can also be challenging for the unfamiliar. A teacher’s worst nightmare is losing control of a class, and suffering embarrassment in front of his or her students. Consequently, risk avoidance is prevalent in education.

Jonas Anim, a UO undergraduate student mentors Olivia, who is a senior at Roosevelt High. Photo by Ed Madison.

It’s time to rethink “professional development.” As it stands, teacher training often exists as a required one-day or two-day live session where teachers gain a few tips, some handouts, and a binder that ends up on a shelf. The intent of these professional development programs is to bring about change in teachers’ practices and attitudes, and in student learning outcomes. However, there is an entire body of research that shows most programs fall short.

Educational psychology professor Thomas R. Guskey, at the University of Kentucky, is among the most cited authorities on teacher training. In an academic article titled, “Professional Development and Teacher Change,” Guskey argues that “significant change in teachers’ attitudes and beliefs occur primarily after they gain evidence of improvements in student learning.” Such evidence isn’t present in conventional trainings where the participants are all other teachers. But what if teachers had opportunities to not only witness results, but to stop a training, review previous sections, and refer back to it on demand? What if the “training” didn’t look like a typical training program or a monotonous instructional video?

Our new model for teacher training blends video tutorials with authentic documentary storytelling. Traditional instructional videos can often seem unimaginative and superficial because they lack “characters,” learners who audiences can relate to. In contrast, documentaries can expose viewers to deeper levels of human experience.

This modular video series allows visitors to follow the narrative arc of three featured students while they progress and face perils as beginning digital storytellers. Our cameras captured highlights from their entire process: from story selection and research, to interviews and field production, to post-production and screening the final works. Viewers become invested in the students’ stories, and get to witness their outcomes. There is also a downloadable teacher’s guide.

Video journalism combines traditional reporting skills emphasized in the Common Core State Standards, such as research-gathering, evaluating and distilling information, and effectively communicating that information to others, with digital technology that can take storytelling to new levels. The project was funded by the Wayne Morse Center for Law and Politics and the School of Journalism and Communication at the University or Oregon, which also donated iPod Touch devices, microphones, lens kits, and a charging station for Roosevelt to keep after the program ended.

Early anecdotal feedback from several teachers revealed that witnessing real students in action helps them visualize themselves teaching these new skills. They also value the ability to stop the story and refer back and access the materials at any time. We see this as a new model for professional development and a pilot for further study.

Ed Madison holds a Ph.D. in Communication from the School of Journalism and Communication at the University of Oregon (2012), where he is now an assistant professor. He is an Apple Distinguished Educator and an Adobe Education Leader. Madison’s multifaceted career in media and journalism began as a high school intern at the Washington Post-owned CBS television affiliate in Washington, D.C. during the height of Watergate. At 22, he was recruited to become a founding producer for CNN. His own subsequent companies have provided services for most of the major networks and studios, including CBS, ABC, A&E, Paramount, Disney, and Discovery.  The Digital Skills Workshop project will be chronicled in more detail in his forthcoming book from Teachers College Press (Columbia University) on journalism, student engagement and the Common Core. Follow him @edmadison.