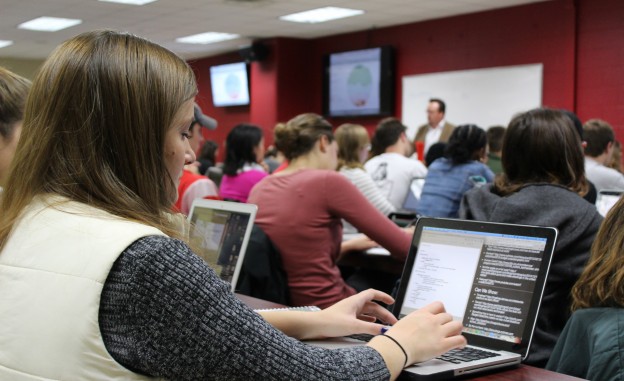 Students at UW-Madison work with social media during lecture. Photo by Mallory Perryman.

In the latest update to his e-text “Searchlights and Sunglasses,” author Eric Newton calls on journalism educators to integrate social media into their lesson plans. Here is an example of what that integration might look like for an introductory journalism course.

Searchlights and Sunglasses: Field Notes From the Digital Age of Journalism by Eric Newton.

The challenge is not only to teach students how to best utilize platforms that currently exist, but to prepare them to be able to capitalize on the features of platforms that will come to exist as technology advances.

“A train crashed Monday night two miles outside of town, according to the sheriff’s office.”

That’s the local newspaper lead students in our introductory journalism course come up with after being presented with a series of facts about a fictional train crash.

“A train crashed Monday night two miles outside of town, according to the sheriff’s office. #danger”

And that’s the lead they often come up with asked to use the same information to write a Twitter update announcing the crash.

The difference between traditional news and social media is more than just a #hashtag. In discussion, that’s something our budding journalists say they understand. They are all card-carrying members of the digital generation, after all, and they regularly use multiple social media platforms in their personal lives.

But just as social media users opt to share photos via Instagram rather than Facebook — or choose to live-update the latest Scandal episode on Twitter, not Tumblr — journalists must decide how to best use social media channels to satisfy various storytelling needs.

That means focusing less on the specific technological aspects of social media and more on how those aspects fulfill different information needs. As University of British Columbia Associate Professor Alfred Hermida said in a previous Remix article on teaching social media, “Don’t focus on the tools and platforms. Focus on how the characteristics of these technologies, such as reach, speed and visibility change how we communicate.”

Our journalism students likely agree that social media are important. They probably acknowledge that they’ll use social media in their future careers. Odds are, many of them already consider themselves social media savvy. Yet, in its transition from local newspaper to Twitter update — the train crash lead re-emerges with nothing fresh beyond a solitary hashtag.

The challenge is not only to teach students how to best use platforms that currently exist, but also to prepare them to be able to capitalize on the features of platforms that will come to exist as technology advances. We could create an assignment that would focus entirely on writing for Twitter — perhaps with an emphasis on choosing more effective hashtags than #danger — but the Twitter of tomorrow may not be the Twitter of today. Students must learn learn how to evaluate the strengths of a social media platform and craft their messages accordingly.