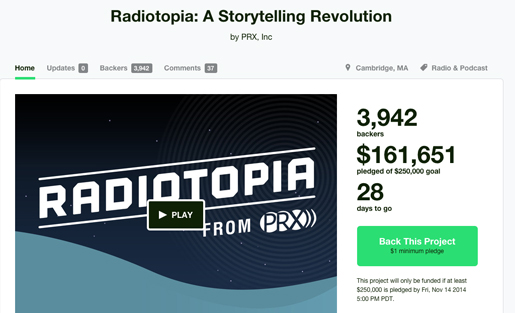 In just two days, the Radiotopia campaign by PRX and Roman Mars has raised more than $160,000 on Kickstarter

Podcasting is quickly becoming a breeding ground for inventive content creators and radio producers striking out on their own. The medium has ebbed and flowed in popularity and presumed viability since its creation, but is having a heyday as key figures from radio are crossing over, striking out on their own, and even making money. A recent Washington Post story noted that subscriptions of podcasts on iTunes surpassed 1 billion last year, while RawVoice says that monthly unique podcast listeners has reached 75 million, up from 25 million just five years ago. On this week’s Mediatwits podcast we’ll be discussing the podcasting renaissance and what kinds of revenue models are being developed to support them. Special guests include The Gist podcast’s Mike Pesca, PRX Chief Operating Officer Kerri Hoffman and regular Mediatwit Andrew Lih from American University and host Mark Glaser from PBS MediaShift, along with Fannie Cohen producing.

"Podcasting is the most niche-tastic media I've ever thought of." --Mike Pesca
ADVERTISEMENT

Mike Pesca is the host of the Slate daily podcast, The Gist, and co-host of Slate’s sports podcast, Hang Up and Listen. He also contributes reports and commentary to NPR.

Kerri Hoffman is Chief Operating Officer of PRX, the award-winning public media company whose mission is to harness technology to bring significant stories to millions of people.

These days it seems everyone and every media outlet has a podcast. Creating and posting content has never been easier or more affordable. Some people such as comedians Adam Carolla and Joe Rogan were early entrants into podcasting and quickly built large audiences that drew sponsors and affiliate deals with Amazon and Audible. Since then, podcast networks have sprung up to help build strength in numbers; those include Midroll Media, Norm Pattis’ PodcastOne network, Radiotopia and PRX.

Podcasts of public radio programs such as “This American Life” and “Radiolab” have long dominated the the iTunes’ charts, but new indie entrants that didn’t start out in radio have made inroads. Former public radio producer Roman Mars’ podcast on design, “99% Invisible,” set a record on Kickstarter for the most funded journalism project. Mars has created Radiotopia, a network of other indie podcasts, and is partnering with public media distributor PRX on another Kickstarter fundraiser. Mike Pesca, another former public radio personality, moved from NPR to Slate earlier this year, launching a new podcast, “The Gist.”