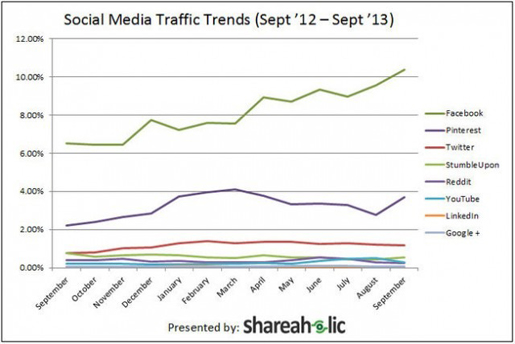 We’ve known for some time that the visual social network Pinterest has a knack for driving traffic to certain online glossy pubs. But now we’re learning just how influential Pinterest is in referral traffic and even e-commerce, just as the giant network starts selling Promoted Pins and a self-service version for smaller businesses. And with its catalogue of over 30 billion unique pins, Pinterest is rivaling Google and Bing as the go-to image search, and even rolled out its improved Guided Search earlier this year. On this week’s episode of the Mediatwits podcast, we’ll be discussing how marketers, retailers and media publications are using Pinterest to engage audiences. We’ll be joined by Christine Haughney from New York Times, Bob Gilbreath of Pinterest marketing firm Ahalogy, and Kate Lewis, who is VP of content operations for Hearst Publications. We’ll also have regular Mediatwit Andrew Lih from American University and host Mark Glaser from PBS MediaShift, along with Fannie Cohen producing.

Bob Gilbreath is Co-Founder and President of Ahalogy, a Pinterest marketing company that works with companies such as P&G, Kraft and Kellogg’s. Previously, Bob was a partner at digital agency, Bridge Worldwide, which was acquired by WPP. Post-acquisition, Bob became Chief Strategy Officer of POSSIBLE. Bob is the author of The Next Evolution of Marketing: Connect with your Customers by Marketing with Meaning (McGraw-Hill). His career started in marketing at Procter & Gamble, where he launched Mr. Clean Magic Eraser and was named an Advertising Age Top 50 Marketer.

Since its birth 4 years ago, Pinterest has become a major source of referrals to digital publications, and is the leader in e-commerce referrals.The visually rich layout and improved Guided Search capability allow users to connect with and discover professionally produced content. With its 70% female user base, Pinterest is the leading driver of traffic to Self magazine online, beating out Facebook and Twitter. BuzzFeed gets more click-throughs from Pinterest than Twitter. Hearst Digital has seen that evergreen stories tend to have a second life on the platform, sometimes gaining popularity months after publication. Harper’s Bazaar and Cosmopolitan have also attracted large followings on the platform. Pinterest is the second largest source of referrals behind Facebook, with more referrals than Reddit and Twitter combined.

Despite hugely successful rounds of funding that have valued the company at $5 billion, Pinterest has only begun to sell ads this year. In May, the network debuted its ad product Promoted Pins with a handful of large national brands such as ABC Family, Gap, and Nestle, commanding up to $2 million for a six month commitment. Soon after, the social network opened the floodgates to smaller businesses with a self-serve cost-per-click version where partners only pay if users click through the pin. They’re also opening their data up to third party marketing suites such as Hootsuite and Salesforce to better help marketers engage. Pinterest-specific marketing firm Ahalogy has also entered the fray promising rich content and optimization of the site for brands. As a retail channel, Pinterest drives 23% of all social mediated sales. Users also spend more money clicking through Pinterest than other sources, including Facebook.