Beyond the Tech Industry Drama, Civic Startups Make a Difference 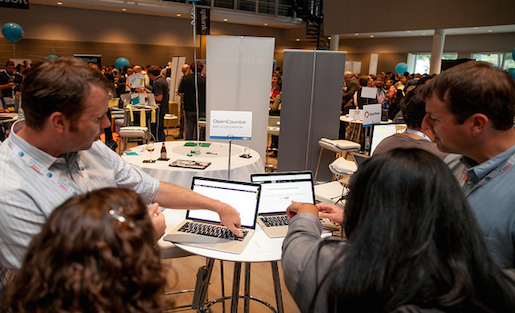 Photo by Code for America and used here with Creative Commons License.

A small but vibrant industry is changing the way governments, elected officials and citizens communicate.

"While the civic tech industry may not have the tabloid headlines...it does have are forward-thinking entrepreneurs and advocates who are trying to improve their governments." - Maury Blackman

When you think about the tech industry, a lot of images are bound to pop into your head. Product launches unveiling the newest wearable technology, hoodie-wearing startup founders embroiled in million-dollar lawsuits. Rival companies duking it out over who offers the best vegan, paleo, gluten-free free lunches or the most comfortable, ergonomically correct stand-up desks.

Understandably, many are drawn to the drama. Recently, a theme in the coverage of the tech industry is the rising tension between techies and everybody else, especially here in the tech startup epicenter of San Francisco.

But in the shadows of mainstream tech, there’s another story that the media, for the most part, isn’t telling. It’s not as sexy as reports of rideshare competitors poaching each other’s employees or the latest app being valued in the billions. It’s about a community of highly skilled, tech-minded citizens who want to make the communities they live and work in a better place.

It’s called civic technology, and this small community of entrepreneurs and companies has been growing, mostly under the radar, for a number of years.

At the 2013 Code for America Summit. Photo by Burt Lum and used here with Creative Commons license.

What the civic tech industry lacks in glitz and glamour, it makes up for in the way it’s helping cities and governments work better together, strengthening our communities and engaging our citizens — not to mention reducing migraines from dealing with inefficient government processes and unnecessary paperwork.

Among the ranks of these civic advocates are those who have said yes to fellowships with Code For America, the non-profit that has been called a “Peace Corps for Geeks,” or work with Fuse Corps and a number of other local civic tech programs, like San Francisco’s Entrepreneurship-in-Residence. Many of these pioneers have created products and services that not only improve communication between local residents and their elected leaders, but also increase government transparency and accountability.

And according to a December 2013 report from the Knight Foundation, the number of new civic tech companies has approximately doubled every four years since 2000. And while you may not hear about these companies that often, civic startups are popping up all over the world.

Take CityGovApp, for example. It builds apps that help city agencies become more efficient and citizen-friendly. In El Paso, Texas, the company developed a garbage collection app that allows for instant documentation and reporting of issues like obstruction, overflow and other problems that might prevent a city refuse service from collecting garbage.

CityGovApp also built a manhole inspection app for the city of Westminster, Colo., that enables field staff to perform regular inspections on manholes using mobile devices. The product eliminates the need for paper forms, which also cuts down on delays since city workers no longer need to fill out a form in the field and then enter the data back on a computer at the office.

Other civic startups like OpenCounter are making it easier for small businesses to get off the ground in a matter of minutes. Its new product ZoningCheck  helps entrepreneurs navigate the long and often complex process of opening a business — by replacing an arcane system with an easy to use web interface.

“The [current] process usually involves a visit to City Hall, and then a two to three week wait,” OpenCounter co-founder Joel Mahoney said. “Applicants basically have to read raw municipal code to understand where they can go. If the municipal code is like the operating system for a city, then it would be like asking Mac users to read the raw code behind OS X. It’s a crazy way to do this.”

Companies like Kansas City, Mo.-based MindMixer and San Francisco’s Neighborland have set out to inspire residents to get more involved and engaged with their governments, bringing the town hall meeting right to local citizens’ computers and mobile devices. Instead of hiring a babysitter and driving all the way to a city office to express their opinions, citizens can participate right from their living rooms.

The 2013 Code for America summit. Photo by Burt Lum and used here with Creative Commons license.

This community is not only bringing government into the 21st century. It is also becoming well-funded. In September, a new $23 million Govtech Fund was launched by entrepreneur Ron Bouganim, and in August, Bloomberg Philanthropies announced a $45 million investment in civic innovation.

MindMixer announced in September it raised $17 million. And another civic startup that builds software allowing governments to visualize their budgets, OpenGov, received $15 million in funding from one of the largest venture capital firms in the world.

These are just a few of the hundreds of companies in the civic technology industry, and their passionate, civic-minded innovators who are trying to make government work better, faster and smarter for all of us.

A New Breed of Public Servants

When you ask most people to describe some characteristics of government, whether it’s at the local level or all the way up to Washington, D.C., you will usually hear the same words. Slow. Inefficient. Bureaucratic. Analog. Rarely will you hear someone talk about governments as innovative, pioneering or state-of-the-art.

A new breed of public servants are working to change this narrative. Many of these civic innovators gathered late September at the annual Code For America Summit at the Yerba Buena Center for the Arts, across the street from where the TV show “Silicon Valley” gets much of its material.

While the growing civic tech industry may not have the tabloid headlines and soap opera drama that we see coming out of the larger tech community, what it does have are forward-thinking entrepreneurs and advocates who are trying to improve their governments — and ultimately the lives — of their fellow citizens.

I am thrilled to be part of this emerging new industry.

Maury Blackman is CEO of the civic tech firm Accela, based in San Francisco and San Ramon.