What’s the Best Way to Throw a Party Online? 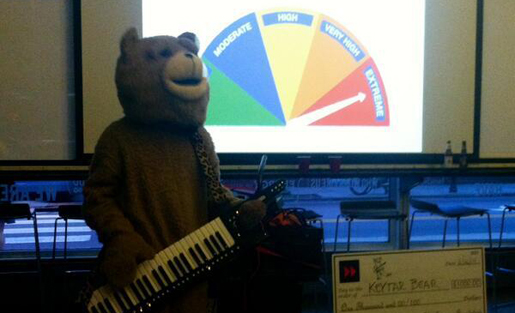 An Awesome party features a giant check and a bear playing a keytar. Via @torchcom.

How do you party with a group of people across four continents? As a trustee of Awesome Knowledge, I’m looking for great ways to celebrate our community and congratulate our grantees. Every month or two, we give $1,000 to an awesome project that spreads knowledge (learn more), and unlike most Awesome Foundations, we’re a distributed group who have no shared geography. Most chapters conclude each grant cycle with a party, where a wide community is invited to celebrate as the grantee receives a big check or bag of money. After weeks of grant reviews and hard decisions, it’s this party that often keeps the foundation Awesome.

Awesome Knowledge can’t easily party in one place, so we’re looking for ways to celebrate online.

"Using video chat or forum software to celebrate is like putting bunting on the wall for an office party, without the advantages of an office."

As Stuart Geiger and I argue in a recent talk proposal, we have a vast proliferation of platforms focused on producing high-quality conversations, but far fewer systems to foster community. Shared calendars, video chats, word processors, and spreadsheets make real-time collaboration possible with almost anyone in the world, across almost any distance. These technologies have profoundly reshaped how we get things done, from crisis mapping to telecommuting — but when we optimize for content quality, we tend get something like this:

Distributed organizations like Global Voices, Mozilla, and Wikimedia manage the online party gap by holding occasional festivals in urban centers, flying as many people as possible to the same place for a week of celebration and community building.

How can we create awesome parties online? Share your suggestions in the comments.

Conversations That Converge and Merge

Using video chat or forum software to celebrate is like putting bunting on the wall for an office party, without the advantages of an office. Software for online conversations often lacks the affordances of physical space that make a good party work. As Judith Donath points out in her book “The Social Machine,” chat software shares everything you say with the entire room, rather than offering a flow of breaking and merging conversations needed for a good party.

Chat Circles and Talking in Circles by Roy Rodenstein are two examples of technologies that go beyond being there. By arranging chat participants in circles on a two-dimensional screen, it’s possible for participants to move around a space and hear only the people who are close to them. This interface allows opportunities like overhearing, introductions, and the chance to move to areas that aren’t being recorded.

How to Be a Great Party Host Online

Great parties need capable hosts. Most work in online facilitation focuses on the quality of content with tasks like upvoting good answers or eliminating spam. Over the last few months, Media Lab colleagues, Computer Clubhouse laders, and I have been testing group facilitation practices on Google Hangout, starting with simple introduction and party games. Many classic games and activities need to be modified for video chat. Mimicry games, for example, can work well when you shout out someone’s name rather than point to them. Charades is another video chat favorite.

Parties sometimes break out when we use productivity technology in unconventional ways. Memes, hashtags, discussion music tracks, and remix threads bring together a wide community into bursts of common creativity that shape our collective identity. Consider, for example, what happened when some friends used Google Spreadsheet to organize a retreat:

The soundtrack Doing the Churlish Pule, is a musical rendition of a conversation thread on Metafilter)

Exquisite corpses and remix competitions on forum sites are great fun, but creative remix can also have a high bar of entry. Unlike the Samba schools described by Henry Jenkins, it’s often not possible to be a visible bystander, open to being dragged into the center by “participation police” who try to make sure everyone has a good time.

Lots of friends have playfully suggested that Awesome Knowledge meet up in Second Life, a dedicated platform for online socializing. Just, no.

Here are four reasons I’m unsatisfied with Second Life as a place for Awesome Knowledge to hold our parties:

Twitch is a great example of a system that’s easy to join and participate in. Alex Leavitt noted this year at PAX that 121,000 concurrent viewers played Twitch Plays Pokemon at its peak — it was easy to jump into a livestream. Single purpose platforms can also facilitate powerful collective experiences, as I’ve previously written about in my post about online prayer events.

Listen to Music Together

Social listening apps like Plug.dj allow you to create listening rooms where you and others can chat and listen to music together. From 2011-2013, this was the business model of Turntable.fm, who never managed to find a lucrative enough business model to justify the $7 million of investment they took in, even after attempting to create interactive concerts for fans with Turntable Live. Plug.dj appears to be a clone of the Turntable idea, offering a more sustainable approach to licensing fees by hosting YouTube videos rather than streaming directly. An API is available for creating extensions and bots.

Plug.dj illustrates the difficulty faced by commercial platforms. Since their business model is music recommendations, they structure user interaction towards rating songs: The only way to dance is to upvote a song.

How do YOU party with your friends online?

This October, Mariana Santos and I are hoping to facilitate a brainstorming session at the Mozilla Festival to find better ways to Party Online. We would love your suggestions — add them in the comments.

Nathan Matias researches cooperation across diversity, creating technologies and social processes that empower distributed communities to become more connected, creative, and effective. He’s a PhD student at the MIT Media Lab Center for Civic Media, a fellow at the Berkman Center for Internet and Society at Harvard University, and facilitates @1book140, The Atlantic’s Twitter book club.