What the Rise of ‘Hands-On Journalism’ Means for Community Engagement 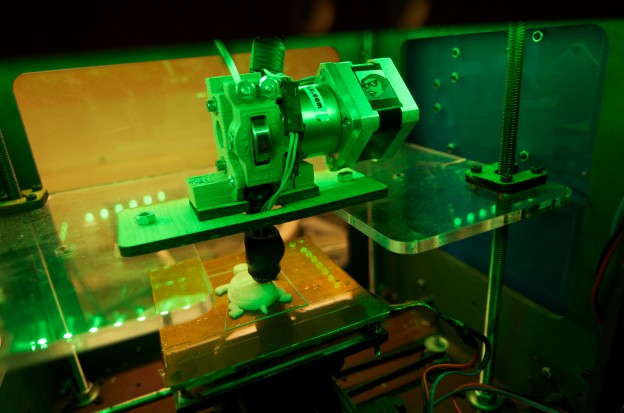 Photo of a 3D printer by Keith Kissel on Flickr and used here with Creative Commons license.

Digital journalism has made possible some incredible storytelling in recent years. Visually stunning reports on issues as diverse as gun violence, environmental disasters, and surveillance have brought stories to life on the screen. Increasingly, however, journalists are experimenting with innovations that move journalism off the screen and into people’s hands.

This spring RadioLab did a story about an ancient skull and the questions it helped answer about the origins of human history. It is a fascinating story, but it revolved around minute details scientists discovered in the skull, details a radio audience couldn’t see. So the RadioLab team took a scan of the skull, printed it out with a 3D printer, and made the scan available online for others to print out. So, now you could hypothetically feel the grooves and markings on the skull as the scientists discuss them, discovering new facets of the skull alongside the narrators.

"I see this hands-on journalism as a particular kind of community engagement, one that may involve collaboration with community, but puts an emphasis on discovery and learning. Specifically the kind of learning that comes from doing."

I am fascinated by the potential for these sorts of journalism-objects to help engage communities around stories and foster empathy with audiences. So I began collecting examples of what I call, “hands-on journalism.”

I see this hands-on journalism as a particular kind of community engagement, one that may involve collaboration with community, but puts an emphasis on discovery and learning — specifically the kind of learning that comes from doing.

The Things We Keep

In 2010 California Watch (part of the Center for Investigative Reporting) published an important story on retailers selling jewelry containing illegal levels of lead (a toxic metal especially dangerous to pregnant women and kids). Immediately after the story was published, California Watch sponsored three lead screening events for people to bring in their jewelry from home to have tested.

A story about lead poisoning is going to have a very different resonance if you find out that your jewelry, or that of your neighbors, has high levels of lead. It brings the story home in a different way, while also providing a very important service to people. More recently, the Center for Investigative Reporting printed a graphic novel, “The Box,” as part of their investigation into teen solitary confinement. Whereas the Internet often feels boundless, reading about solitary confinement in a medium that is bounded by page-edges and covers gives a very different feel to the story.

Jessica Clark, the director of Dot Connector Studios and the curator of Tumblr “The Revenge of Analog,” argues in a post on Medium that “digital isn’t all it was cracked up to be.” “Our desire for the offline, the tangible, the face-to-face is foiling previous predictions of a fully-digitized future, and leading to a much more interesting and multilayered alternative,” she writes.

As we create physical objects and experiences to augment digital storytelling, we are also imbuing physical objects with Internet connectivity, in a way that Clark says, “erodes the stories we tell ourselves about the duality of online and offline life, and the innate functions of specific platforms.”

In 2008 Clark was testing “locative” projects focused on getting people out into the world with GPS-driven place-based audio stories and interactive maps. This year, former Associate Press reporter Samantha Gross launched StoryTour, which describes itself as “an in-person magazine that brings its audience offline to experience stories firsthand through on-the-scene storytelling.”

StoryTour gives journalists a chance to literally bring people into the story, connecting great journalism to curious people in amazing places. A recent StoryTour called “The Land of Slow Food Startups” introduced participants to one building in Brooklyn where “the city’s DIY community and rapidly shifting food culture meet.” In a similar vein, Postmedia Network in Canada created Gastropost, which ”sends its members on weekly food missions that could involve a specific ingredient, a particular cooking style or something that invokes a certain emotion.”

In an interview, Gross told me that when she was reporting for the AP, “the best part of my job was something the audience never got to see.” She wanted to introduce people to the faces and voices behind her stories, to let them ask their own questions, to see the building blocks of each narrative first-hand. Hands-on journalism is often an effort to move people beyond the story and foster a deeper connection to issues and people. When Benjamen Walker launched his new mobile app, Boardwalk Stories, from Sandy this summer he said, “We tried to do it in a way that draws in people interested in Sandy and others who don’t understand the science or who might not understand why people would want to rebuild.” The app takes users on a physical walking tour of Hurricane Sandy devastation on the New Jersey shore through GPS-tagged audio stories.

The growth in interest in hands-on journalism is also evident in the increase in journalism events hosted by a range of newsrooms around the country. These events help position largely digital newsrooms physically as hubs in communities. They give readers a human connection, and extend the reporting.

Mashing Up News, Art and Technology

Hands-on journalism also creates new opportunities for artists, technologists and journalists to collaborate. For example, to help visualize an investigation about Wisconsin dairy land and farm waste, Wisconsin Watch shared their reporting data with artist Carrie Roy who created sculptures representing the stories. The Center for Investigative Reporting has worked with young people in the Off/Page project to create poetry from their reporting. And in 2013, RadioLab created an easy-to-build soil-sensor kit and distributed it to listeners to build, so they could monitor the emergence of cicadas in the Northeast.

Hands-on journalism can help break down complex issues, through tasks, projects and first-person experiences. It not only helps us see the issues more clearly, but also helps reveal aspects of the issue, new angles and perspectives, that may not have even made it into an article. For that reason, I think hands-on journalism is particularly interesting as a tool for reporting on what New York University journalism professor Jay Rosen, and others, have called “wicked problems.”

Not every story lends itself to these approaches, but the exciting thing about hands-on journalism is that it encourages journalists to imagine new ways for stories to exist across platforms, on and offline. Hands-on journalism doesn’t privilege the physical over the digital, but instead recognizes how the two can work productively together. In the future, the stories that move us most might persist as memories of great experiences or objects on our bookshelves, rather than just links in our browsers.