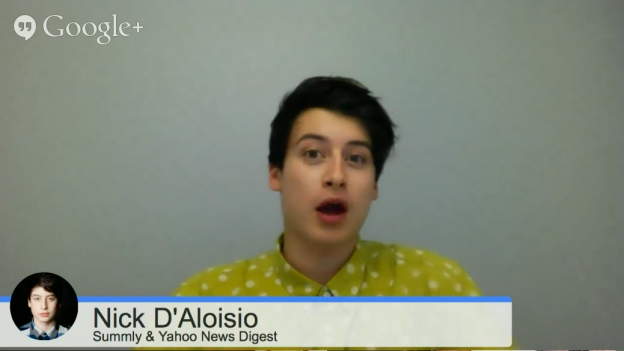 Nick D'Aloisio, who developed Summly and sold it to Yahoo for $30 million. D'Aloisio now is head of the critically acclaimed Yahoo News Digest app, which won the Apple Design Award at WWDC this year.

With media consumption moving inexorably toward mobile, the experience for getting news on a mobile is fragmented. Every news outlet has its own app, but who wants to open them all every morning? Enter the aggregated news apps, which have gone from Flipboard, Zite and Trove to Yahoo News Digest (born as Summly), NYT Now, Circa and the most recent entrant from Al Jazeera: AJ+. This is still a nascent era for mobile news, and the competition will only get more stiff with News Corp. and others developing yet more apps. So which ones will become dominant players, and which will be sidelined? We only have so much time in our days for news apps, so our favorites have the potential to become major gateways to news — and money-makers.

On this week’s Mediatwits podcast, we’ll immerse ourselves in news apps with teen wunderkind Nick D’Aloisio who founded Summly and sold it to Yahoo (where it became Yahoo News Digest); Circa founding editor David Cohn; and David Perpich, general manager of digital products at the New York Times. Plus, we’ll be joined by regulars Andrew Lih from American University and host Mark Glaser from PBS MediaShift, with Fannie Cohen producing.

Nick D’Aloisio is the founder of Summly, an artificial intelligence company that created a summarization algorithm and mobile product in collaboration with the Stanford Research Institute. Summly was acquired by Yahoo in March, 2013 and its investors included Li Ka-Shing, Rupert Murdoch, Yoko Ono and others. Today, Nick is a member of the mobile group at Yahoo, where he is re-imagining Yahoo’s core experiences for mobile and tablets. Nick is the Product Manager of “Yahoo News Digest”, which launched at CES in January of this year and is an evolution of the work he did at Summly. Yahoo News Digest received the 2014 Apple Design Award at WWDC in June 2014 and has been critically acclaimed. D’Aloisio was awarded ‘Innovator of the Year’ by the Wall Street Journal for his work to date and is also currently completing his education at Kings College School, Wimbledon.

David Cohn has worked on some of the first experiments in distributed reporting, social journalism and “citizen journalism.” In 2008 he created the first platform to crowdfund journalism. In 2010 he was named one of the “Ten Under 30” by Folio magazine and in 2013 Columbia’s Journalism School gave him the Alumni Innovation Award. Most recently he is the Chief Content Officer of Circa, a startup redefining how news is consumed on the mobile phone and one of the first organizations to experiment with atomized news structures or “object oriented journalism.”

While the early leaders in news aggregation such as Flipboard were keen on personalizing the news experience for each user, the new crop of aggregators decide what’s important for you. And what was once Summly and is now the Yahoo News Digest prides itself on being released just two times per day — similar to the morning and evening editions of good old print newspapers. The app initially used an algorithm to sum up stories into just 400 characters, but now has human editorial input — and licensing deals — from tech giant Yahoo. Yahoo bought Summly for a reported $33 million, and built Yahoo News Digest on top of its architecture. Summly founder Nick D’Aloisio continues to help run the app for Yahoo while taking college courses in London. One big advantage the app might have is it’s the default news source for the new line of Apple Watches. Plus, there’s now a version for iPads.

Circa similarly works to condense news articles into easily digestible “cards,” specifically designed for use on mobile. Matt Galligan, CEO, says that app is meant to “carve out the ability for someone to catch up on news quickly in a mobile environment.”  Circa uses writers who consense stories into text boxes that get strung together to create a flash-card style narrative. Because the text is compiled by humans, Circa has the advantage of being able to update stories in the moment, rather than creating new articles. Circa also plans to release a news-summarizing app later this year as the company’s first revenue stream through ads and data licensing.

On the traditional news outlet side, the New York Times’ NYT Now app (only available on iPhones) was designed to appeal to the mobile news consumer. The app features content that is more curated than the print and web versions, and is formatted with unique blurbs unseen in other formats, along with the estimated time it will take you to reach each full article. The idea is to make the paper of record’s content into something scrollable, designed for people who can’t or won’t always read the linked articles. The NYT also employs an editorial team to curate other stories of interest on the wider web — giving it a duality with the best of NYT content and the web. Unlike competitors, though, it will cost you $2/week after a free four-week trial.

Meanwhile, TV network Al Jazeera has released its own AJ+ iPhone app with a nod toward viral video from Vine or NowThis News. AJ+ produces content specially for the iPhone, in the form of card stacks, short videos, features, and explainers. The stacks are easy to navigate and digest quickly. It could be the first step forward for Al Jazeera to create an all-digital network.