Mark Little: ‘This is the Golden Age of Storytelling’ 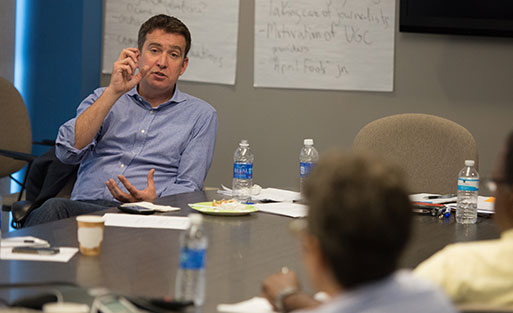 Attending a wedding in Ireland several years ago, Mark Little saw fellow guests looking at their phones, as they learned that Michael Jackson had died. Soon, the group was dancing to Thriller as a tribute to the late star. That dance, Little said, happened 15 minutes before the Los Angeles Times had even officially announced Jackson’s death. At that moment, he said he thought, “Wow, that’s the way news is being consumed.”

As the founder of Storyful — a global news agency that finds, collects, and verifies social-media content — Little has served as a leader of our massive information shift: How is news changing? How are stories changing? And what are the ethics involved as traditional media outlets transition from being the gatekeeper to being part of a worldwide reporting network in which every citizen can contribute to — or even completely tell — our world’s most important stories?

Just an hour before I met Little, who spent two days at the University of Florida College of Journalism and Communications as the first speaker in our Innovators Series, I had lectured to a group of about 275 students about the importance of “story.” I do this because this particular class is made up of both journalism majors and non-journalism majors. While the students in our field know (or at least should) the value of “story,” I find that others can look at the word story through a paparazzi-type lens: Just out to get a story. Trying to drum up a story. Anything for the story.

So I discuss common narrative themes — such as human vs. human, good vs. evil, the underdog rises to hero, the love story — and I reference a Scientific American piece that explored why stories universally appeal to humans. I try to reinforce that stories — whether the message is good or bad (or more likely somewhere in between) — are inherently good because they have the power to connect us all in a way that other forms of communication do not. I worry about stories, though, because of all of today’s noise, because of the emphasis on immediacy, because of our click-click-click-funny-kitty habits.

After watching Little speak to students and being involved with smaller discussions with him about such important issues as newsgathering, verification, social-media archives, and the notion of impartiality, I did a mental fist pump when he said, “For me, this is the golden age of storytelling.”

It is for many reasons — because traditional media outlets don’t hold exclusive rights to stories anymore, because of the potential to tell richer and deeper stories with sources closer to the center of action than any media member could be as news breaks, because so many brands are redefining how they will use storytelling to share their messages. (To be fair, there are dangers and ethical issues that come with this expansion, Little said — ranging from propaganda being used through social media to all kinds of hoaxes to thinking about how we compensate and credit our non-traditional storytellers.)

These are some of the key things Little said that I’ll remember while trying to educate our future storytellers.

1. “Authenticity is more important than authority.”

Part of Storyful’s mission is to go to the center of the story — finding the social-media posts that are the closest, most authentic, and most accurate sources that are watching the news unfold. They do this by using technology to see hot spots of social-media activity, then filtering that content to pinpoint what’s important and what’s real. This is different than how we traditionally teach journalism, especially to introductory students, where we heavily rely on information that only authoritative sources can confirm. Part of what we will have to teach our storytellers is to balance the experts with the witnesses who are posting information themselves — and that the person-on-the-street interview isn’t a throwaway quote, but can be the heart of the story. If you find the right person.

In our news cycle, there are two types of disseminators — the reactors and explainers, Little said. While some outlets will continue to want to be the first to break news, that’s really an artificial distinction, because there’s so little value in who got it first, since everyone now has it within seconds. In both our traditional and social-media models, some of us will always be hardwired to want to get it first, as our Innovator Series moderator Bridget Grogan pointed out. The deeper value that storytellers can have is in providing niche content and quality content with depth, Little said. Even in this technological age, he said, we’ve seen a shift in where we place value of online sites — from the content farms to the click-bait sites to more of an emphasis on longer and quality content that encourages eyeballs to linger on a page.

3. “Journalists hate failing. We don’t want to make a mistake. That makes for a terrible entrepreneur.”

One of our challenges in the academy will be teaching students about risk-taking and about failure. We’ll need to create ways to reward them for failure (because the education came from the attempt at innovation, not necessarily the result). This, as Little pointed out, is hard for journalists to think about, because we’re programmed to be accurate at all costs. Better not to publish than to be wrong. Many of us will need to spend more time thinking about ways that we encourage experimentation from our student storytellers.

4. “Everybody wants to be the person who tells the story.”

Little said this when someone asked him why he thinks people create Internet hoaxes, but his quote also reinforces this notion that we couldn’t be in a better (or more complex) time for storytelling. We all want to tell the tale, pass it on, deliver the news — and ultimately connect with people as we do. As Little said, “Every news event creates a community.”

You can watch a video of the Q&A with Little on the Innovators site and check out social media activity around his visit at #UFInnovators.

Ted Spiker is the interim chair of the department of journalism at the University of Florida. He primarily teaches courses in magazine writing and sports media. You can follow him @ProfSpiker.