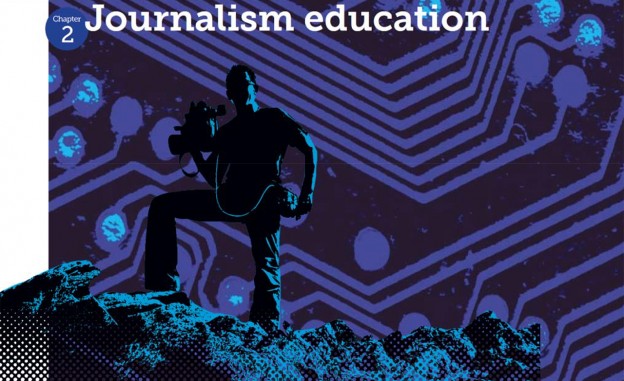 Searchlights and Sunglasses covers journalism education through an experimental digital approach, including a learning layer of resources and activities.

Last week at the Online News Association convention in Chicago, we did a “lighting round” on our update of Searchlights and Sunglasses, the free digital learning resource Knight Foundation offered up last year to journalism education.

Did we just say the first edition launched last year? That seems like a lifetime ago — maybe because, in iPhone years, it is. If anything, the accelerating pace of change reinforces the Searchlights and Sunglasses message: We in journalism and journalism education still aren’t changing fast enough.

Searchlights and Sunglasses: Field Notes From the Digital Age of Journalism, by Eric Newton

That said, we see hopeful signs of change – “green shoots,” we are calling them. They take the form of new classes, projects, tracks and degrees. Indicators of hope include the number of members in Online News Association’s educators group on Facebook, which has almost doubled to more than 700. Even better, some 125 journalism schools – roughly a quarter of all schools and programs in the U.S. — applied for the Challenge Fund for Innovation in Journalism Education.

In the update we’ve added many new links and lessons, everything from Weird Al’s Word Crimes video to a better explanation of the “teaching hospital” form of journalism education. I won’t list them here because, frankly, I’d rather you to join the 20,000 people who have already taken a look at the resource.

We’re also looking forward to an event at the end of October with our project partner, the Reynolds Journalism Institute at the University of Missouri, to celebrate Searchlights and Sunglasses 2.0 and hear from folks bringing new ideas to journalism education.

One of the best changes we made to 2.0 was to emphasize the #EdShift Twitter hashtag, which includes your comments and tracks the activities here at EducationShift. So if we didn’t see you at the Online News Association conference, we hope we’ll see your comments here and on the #EdShift feed.

This post first appeared on the Knight Blog, a product of the Knight Foundation.