The Guardian’s Contributoria Takes Off, Mixing Collaboration, Crowdfunding and Print 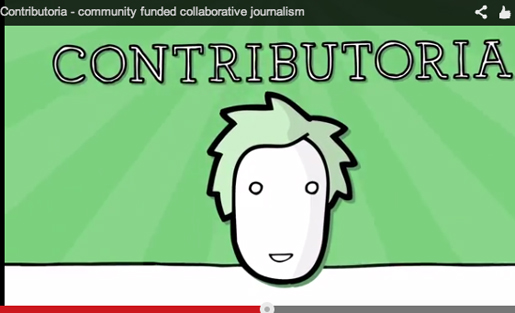 A screen grab from a video explaining how Contributoria works.

Matt McAlister, who serves as director of digital strategy at Guardian Media Group, had a vision for collaborative, crowdfunded journalism that would facilitate two different kinds of communities. That vision has become Contributoria, which allows independent writers to pitch stories that are supported by people who like their ideas. And the finished result ends up not just online — but in a popular print magazine.

"Collaboration on what happens before something gets produced seems to elicit very constructive behavior." -Matt McAlister

So many crowdfunding efforts for independent journalists have tried and failed in the past, from Spot.us onward, so what can Contributoria add that others haven’t done? First, it has the backing of Guardian Media Group, which is more interested in supporting quality journalism and experimenting with open journalism than pushing for profits out of the gate.

And McAlister says something special happens when ample time for constructive criticism is allotted before the writing process ever begins, and the final product is significantly better because specific feedback has been input from start to finish. So the venture brings together like-minded writers who are looking for affirmation and development of ideas, writing suggestions and final reviews. More importantly, this community helps create a way for stories to get told that might have been stalled by traditional gatekeepers.

Launched earlier this year, Contributoria has been tweaking and assessing progress since the beginning. I wanted to speak to McAlister about how he hatched the idea for a new brand of crowdsourced, crowdfunded journalism. Here’s what he had to say in our email interview.

Can you tell me the concept behind Contributoria? How did you develop this specific flavor of crowdsourced journalism?

Matt McAlister: The initial inspiration for Contributoria came from a few different things — Guardian editor Alan Rusbridger was driving a change at the organization around open journalism, tools like GitHub were enabling collaborative software development in a new way that seemed relevant to the journalism process, and crowdfunding platforms like Kickstarter were just getting off the ground and becoming viable methods for democratizing financial support for creative work.

Then we formed a team of all-stars including Sarah Hartley, Dan Catt, Tom Armitage, Dean Vipond and Nat Buckley. Contributoria started to just become itself as everyone here bounced ideas off each other and turned those ideas into reality.

Then we let the community take over and give it shape and substance and to make it a great place for journalists to work independently. That became the core principle driving what makes Contributoria unique. It’s about putting writers first and democratizing the journalism process.

How would you compare Contributoria to outfits like The Big Roundtable, Uncoverage.com, Medium, others?

McAlister: I think what makes Contributoria unique is the relationship writers have with other writers in the community and the way readers can engage in the creative process. Collaboration on what happens *before* something gets produced seems to elicit very constructive behavior.

How does Contributoria advance the Guardian’s interests?

McAlister: The Guardian is very interested in approaches to open journalism, and this is a very pure expression of that. Contributoria is giving the Guardian direct insight into new methods and models for opening the journalism process, too. It’s very useful to the core business as well as the Guardian’s wider interest in supporting quality journalism in the world.

What has the response from the writing community been like?

McAlister: We’ve done some light survey research, and we did some user testing in a lab, too, and we’re seeing a very positive and supportive attitude towards Contributoria out there.

Just about every writer who gets commissioned becomes a regular contributor, and, even better, they become active promoters of each other, too. You can see in the comments how they are encouraging each other on their work, helping each other with sources and new angles and even tips on how to get backed.

Being a freelance writer and editor is so difficult, not only because we usually live on coffee and ramen but also because we have to wear a bunch of different hats to help a story come to fruition. How does Contributoria’s process aid writers who no longer have to go through a hard-to-reach, overworked editor for story approval and feedback?

McAlister: We’ve had a very positive response from writers who pitch ideas that might not get through most of your typical editorial desks. While you still have to craft a pitch that entices Contributoria members to support you, the idea doesn’t have to be fully formed before getting commissioned. And you don’t have editorial agendas or biases steering you other than those of your backers.

Then you have the other writers and our own support team who help you along the way with your story as you publish drafts prior to publication. We also encourage some rigor in the way stories are told, and we help with legal advice if necessary. We want writers to feel confident that they are publishing something good that they are proud of.

Then we send payment after you get published. We love that part. Paying people who’ve written something wonderful is very satisfying.

Speaking of crowdsourced journalism, why did the Guardian also agree to curate a page of Kickstarter projects?

McAlister: The Guardian has a very healthy attitude about experimental projects in journalism. Crowdfunding is particularly interesting right now, which is why The Guardian supported Contributoria and partnered with Kickstarter.

Why does the media industry need crowdsourcing?

McAlister: When people work together they can accomplish incredible things. Media is no exception. The new methods enabled by collective activities like crowdfunding and crowdsourcing mean that people can operate both independently and collectively on projects without having to rely on an employer to make their work possible.

While many have been predicting the end of journalism and the newspaper, these methods are enabling a new kind of journalism that is free from the control and influence of a single entity and its commercial interests.

In your opinion, what is the future of crowdsourced journalism?

McAlister: It’s easy to imagine more people involved in more journalism as things progress. There are many small and easy ways everyone can contribute meaningful information and ideas, and professionals have better access to each other and the resources they need for the more challenging projects and investigations.

I’ve always been very optimistic about the future of journalism, and now that some of the challenges of operating independently, distributed and connected all at once are starting to mature, I think we are on the cusp of a very exciting new era in journalism.

What happens when the well runs dry? How does an outfit like Contributoria remain sustainable?

If we’ve done this right, then Contributoria Limited will act more like a facilitator of a market rather than something that owns everything. Then sustainability is more of a question of the size of the market we’re in rather than the value of the company’s assets.

McAlister says they can’t get printed copies of Contributoria out to readers fast enough.

What have you learned since starting Contributoria? What has worked? What do you plan to change?

McAlister: There were several assumptions in the early prototype that proved out successfully and several guesses that surprised us. For example, we thought monthly membership and backing via allocation was a stronger proposition than one-off drive-by crowdfunding, and the level of ongoing engagement we’re seeing from members seems to demonstrate that.

We also thought it would be fun to make a newspaper, but we initially considered it to be more as a marketing device to help explain Contributoria, to make it feel more real. It does that very well, but it turns out we can’t get the printed copies to people fast enough. They love it! Who would’ve guessed that print mattered to people so much?