Teaching the Digital Media Revolution Without Disregarding the Past 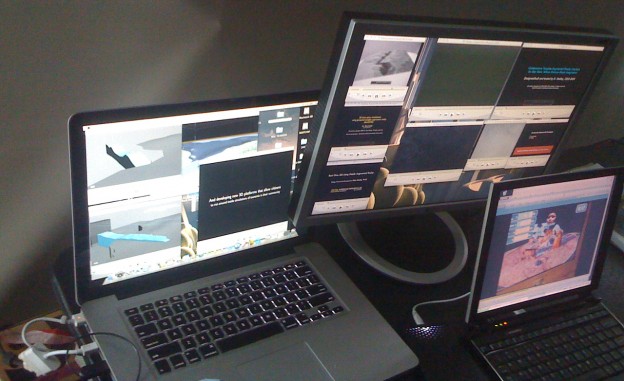 Communications professors at Tec of Monterrey had a visitor last week, Thom Gencarelli of Manhattan College, who made us think about what we are teaching and how we are doing it.

Among the questions he left us with:

"Speech changed humans and their culture. So did the written word, so did the printed word, so did electronic media. Digital media are doing so again."

Not a blog topic

An article about the nature of our culture requires attentive thinking. Pondering. Something we do less and less of as we are distracted by the urgent news and information that comes to us through our email, RSS feeds, social networks, and instant messaging, to name a few of the many digital information sources we have.

As I thought about blogging on this topic, I realized that the subject matter really doesn’t work in a blog, where people want to read something quickly, extract a useful piece of information, and move on. My own thought process here is an example of how the media — in this case digital media — shape the culture and public discourse. But I decided to blog anyway. So maybe we human beings can transcend the media we swim in.

Here are a couple of takeaways from three days of discussion (takeaways are an essential part of that digital media creature, the blog).

Gencarelli described the four revolutions in the history of human communication and asked us if we are in the middle of the fifth:

If we are in a fifth revolution, how is it different?

One professor of sociology suggested that in the digital world, we can create many identities, including false identities, and that this might be revolutionary.

Others suggested that social media have reduced the importance of authority figures in culture; we get our news and information based on recommendations in Facebook, Vine, YouTube, Pinterest, and Twitter. This might be a revolutionary overthrow of authority figures comparable to the French Revolution.

Another suggested the fifth revolution is that digital communication is constant, 24 hours a day, and that it is interactive. Our social media friends, our WhatsApp contacts, our family can reach us on our ever-present devices at any moment.

Several of the two dozen professors attending Gencarelli’s seminar lamented the fact that students now expect them to be entertainers. Students have been trained by television and other media to expect information and knowledge to be transmitted as entertainment. The written word, they suggested, has been overthrown.

Some professors lamented the game-ification of learning through video games, while others swear by them as a tool for getting students’ attention.

For me, what is revolutionary is that machines driven by algorithms based on our behavior in digital media have begun to read our minds, with greater and greater accuracy so that information comes to us in a personalized and contextualized form.

One professor of marketing and communication said his students have become so immersed in the virtual world that they mistake it for reality. For example, they believe that giving a “like” to a social movement on Facebook constitutes social activism. He has to tell them that activism means to take action, such as march in a protest or campaign door-to-door for a cause or candidate.

Others suggested that we need to teach students how to read, since it is an unnatural act of intense concentration that does not lend itself to multitasking with one’s social network.

Finally, Gencarelli suggested that we study the nature of digital media themselves — not just their content, or the industry, but how these media shape the messages we send and receive.

He and two Tec professors, Alejandro Ocampo and Fernando Gutierrez, are members of the Media Ecology Association, which studies what Postman called “the matter of how media of communication affect human perception, understanding, feeling and value; and how our interaction with media facilitates or impedes our chances of survival.”

They also count  among their philosophical guides Marshall McLuhan, whose 1964 work, Understanding Media: The Extensions of Man, broached the idea “the medium is the message.” In other words, the medium is more important in conveying meaning than the content of the message itself.

More of the same

Speech changed humans and their culture. So did the written word, so did the printed word, so did electronic media. Digital media are doing so again. I spend my days trying to keep up with the digital changes while keeping a foot in the past.

Part of me is nostalgic for the value of reading. It was books and reading that shaped my career, which started out in literary scholarship and then took a turn to journalism. While I loved the movie “Little Big Man” when it came out in 1970, I recently had a much richer experience reading the 1964 novel by Thomas Berger on which it was based.

But media come and go. Homer’s Iliad and Odyssey, composed around 2,700 years ago, were written versions of a highly oral tradition, with all the characteristics of a poem that was sung to its listeners.

Virgil’s Aeneid, the Roman epic composed about 700 years after Homer, built on the Greek epics but within a tradition of written composition.

Milton’s Paradise Lost, some 16 centuries after Virgil, was an epic that looked back to Homer, Virgil, and Dante but was a printed text. And it was printed texts that led to the democracy and free speech movements in 17th century England that Milton championed, as well as to the regicide he defended.

How to encourage reading

Hardly anyone reads any of these works any more except academics and some of their students. Perhaps it has always been so, that only a handful of literati have had the time or talent to explore these types of artistic masterpieces and how they defined a language, a culture, a religion, a philosophy.

Now our job as teachers is to show our students how digital media are defining them and their culture in the same way these other forms of communication revolutionized human thought and behavior. To do that we have to look to the past, which means getting students to read.

How to get them to read? Intellectual bullying, some say. Tell them it’s good for them. Shame them into it. Appeal to their pride and independence by showing them how not to be manipulated by digital media. Argue that reading and writing well are fundamental to business success in any communication field.

Make a game of it. Remember that you are competing for the attention of, in some cases, teenagers who are used to being entertained. As a last resort, if you can’t beat them, join them. Maybe we need to take a deep breath, step into that classroom, fire up the visual aids, join Facebook, and start entertaining.

James Breiner is a consultant in online journalism and leadership. He is a former co-director of the Global Business Journalism Program at Tsinghua University and a former Knight International Journalism Fellow who launched and directed the Center for Digital Journalism at the University of Guadalajara. He is bilingual in Spanish and English. You can follow him on Twitter here.

This is an edited version of a post that appeared on the blog News Entrepreneurs.