Reese News Lab Students Take Their Pitches Outside the School 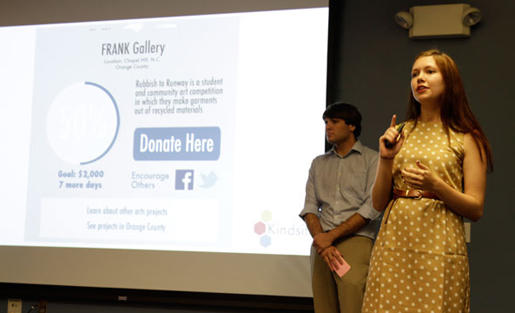 Eight students from Reese News Lab, dressed in their best, were prepared to pitch in the American Underground, the heart of startups in the Triangle. As everyone piled up in the van to leave for the destination nearly 30 minutes away, a jovial mood set in.

They seem ready to take on the challenging task of this pitch — which is itself a new experiment by the Lab.

It is the first time Reese News Lab has planned its pitch day away from the comfort of the school. This time, not only would the students be pitching in a foreign place, but they would also be facing seasoned entrepreneurs in their nesting ground.

“The students will get to experience what it’s like to make a presentation where other companies are making the same presentations,” said John Clark, executive director of Reese News Lab. “It’ll be a different challenge.”

The students were greeted by the delicately designed interior of American Underground, complete with arcade machines and serious-looking adults hunched together in meetings behind glass doors and windows. They admired the place, paced around nervously, practiced their pitches, and put up their best faces as the guests began to trickle in.

Twenty-two people — venture capitalists, professors, entrepreneurs, and researchers — filled the room. After Clark’s brief explanation of the News Lab’s three principles of desirability, viability and feasibility, the students took off in their presentations.

Kindsite, the first group to present, originally began in the summer with a task posed by a client. Two prototypes and conversations with nearly 40 charities later, they created an interactive platform that enables local nonprofits in North Carolina to communicate their most vital needs to the community.

The second group — Legal Stats — was tasked with creating new value for public records. Their solution? A service that offers automated statistical reports for the likelihood of getting out of legal offenses by aggregating case records from the North Carolina court system. It will answer the question most first-time offenders have — “What are my chances?”

Hands from the audience shot into the air, eager with questions during the Q&A session.

“What is your impact on the society?”

“Who is going to analyze the data? What is the personnel cost for that?”

“Are there any similar services offered out there?”

Tough as some questions were, the students took it like professionals, giving concise and well thought-out answers.

“There were no curveball questions” was the general agreement among them. They had expected and prepared for these inquiries, the result of 11 weeks of intense research and constant questioning.

Their efforts did not go unnoticed.

“They’ve done a lot in 11 weeks,” said John Austin, director of Groundwork Labs in American Underground. “They’ve been asking the right questions and focusing on the right points.”

Kelly Hinchcliffe, investigative reporter at WRAL.com, was impressed by the quality of the students’ work, particularly in the dedication they showed in collecting data.

“They were asked tough questions and had good answers,” she said. “When I was in college I wasn’t doing anything close to this.”

The enthusiasm of the pitch didn’t end with the Q&A session as several guests stayed to talk to the students. The students were themselves satisfied with their performance.

“It went much smoother than I expected it to,” said Jonathan Gaegler of Legal Stats.

The best outcome: They have survived this pitch to professionals.

“Their ideas show a lot of promise and they should look into it further,” Austin said. “My advice for them is to keep going.”

Zhai Yun Tan(Nat) is a student intern in Reese News Lab, an experimental media and research project based at the School of Journalism and Mass Communication at the University of North Carolina at Chapel Hill. She is junior with a major in journalism and minor in environmental studies. As a transfer from Malaysia, Nat enjoys observing American culture and eating Southern food. Find her on Twitter @Zhainatyun