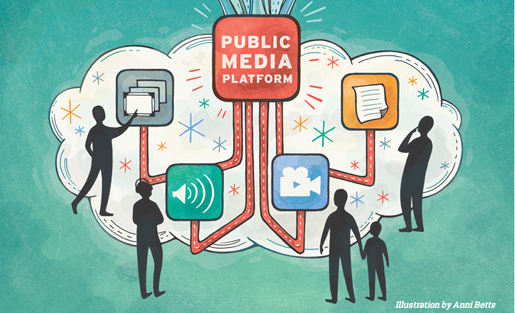 For so long in public media, there has been a dream of interoperability and collaboration where local public stations could share and mix content from other stations around the country seamlessly. While many previous digital initiatives have come and gone, the Public Media Platform (PMP) has found its sea legs. A non-profit birthed from NPR, PBS, American Public Media (APM), PRI and PRX, and funded with $8 million from the Corporation for Public Broadcasting, the PMP can now walk the talk it’s been making for years.

Rather than just talk about what it might do, PMP now can show what it can do to stations and partners. The system is now handling tens of thousands of stories, images, audio and video with American Public Media pushing content like “Marketplace” out to stations.

"The good news is that change is coming and many of the leading organizations in public media are already on board." -Marc Pultuskier

“I think, in the long term, it will be a huge cost savings for [stations] because no longer will they have to support and understand multiple ways of getting content,” APM’s Peter Karman told the PMP blog recently. “It’s in many ways like the satellite system for radio, but for digital content.”

It’s been interesting to watch the gestation of PMP while I’ve been leading MediaShift’s development of our CollabMatch platform for matching collaborators in journalism and media. Would it be possible for CollabMatch to help public media stations find collaborators and then distribute their work in the PMP?

We decided to do a “double Q&A,” in which I asked PMP’s Marc Pultuskier, director of development and marketing, a few key questions and PMP did the same to me about CollabMatch. You can read their Q&A here, and mine is below.

In two sentences, how does PMP work?

Marc Pultuskier: The Public Media Platform (PMP) uses a hypermedia API to distribute audio, video, text and images from public media stations and producers across a variety of websites, apps and mobile platforms. Hypermedia APIs use machine-readable pages with links to other pages; so the PMP is self-describing, flexible, and entirely forgiving — it is the right solution for stations managing a complex digital world.

What were some of the biggest challenges in getting it up and running?

Pultuskier: Defining and establishing a new organization, with a startup mentality, and an aggressive timeline, that is building something for the digital arena. And, of course, explaining an API to people who don’t work in this space.

Pultuskier: Public media has achieved so much without the deep pockets other broadcasters have. This required hard work, dedication and efficient processes. Some of these processes and tools have become outdated, but are still essential to the operation and, therefore, cannot be easily changed.

Think of it as railroad tracks with beautifully crafted train cars that need to be updated while trains are constantly running — trains that provide an essential service to the public every day and are very comfortable and well known. They are juxtaposed next to a high-speed train with WiFi and other modern conveniences. It’s like everything else: change is hard and changing within a federated institution, like Tom Daschle said, ‘can be like herding frogs into the back of a pick-up truck.’ The good news is that change is coming and many of the leading organizations in public media are already on board.

What’s your marketing plan for getting more content into PMP?

Pultuskier: The PMP was in the works for many years — a lot of time to develop effective marketing and business strategies. The secret, however, is that we believe that the PMP is something that public broadcasters have been waiting for for a long time, so getting stations and producers to use it won’t be a hard sell.

How do you imagine PMP might work with CollabMatch?

Pultuskier: CollabMatch and PMP are both founded in the belief that collaboration is the only way forward. There are so many talented people working in public media and CollabMatch and PMP provide real frameworks and opportunities to enable these individuals to share their talents and creativity.

What’s the most eccentric thing about one of PMP’s team members?

Rank these items for team-building at PMP: drinking; dancing; sharing YouTube videos; complaining about people who ‘don’t get it.’

1. Drinking (because it always leads to…)
2. Dancing (after which we…)
3. Share YouTube videos (to catch our breath and…)
4. Complain about people who don’t get it.

What’s your vision of PMP in 5 years?

Pultuskier: In five years, the PMP will be the backbone infrastructure of public media’s successful digital strategy, bringing public media content to millions of listeners, viewers and users.

It’s the platform on which a new business model is created, that serves an expanded audience and re-articulates the fundamental value of what public media is: an independent service for the American public that the commercial industry cannot or will not create.