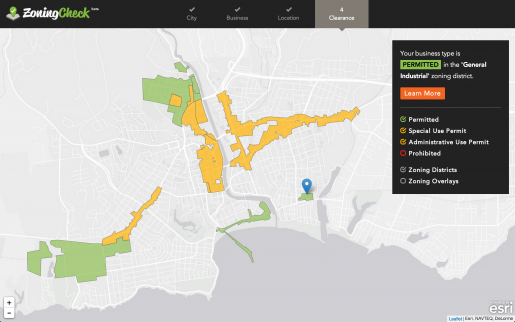 ZoningCheck can calculate the impacts of zoning overlays and special districts on planned business activities.

A blueprint for a community’s future, the zoning code is incredibly powerful. It will affect where people live, where they work, and how they get in between those two places. When zoning codes are revised, cities have to make huge decisions. Internal borders get redrawn, issues of setback and walkability are discussed. There is a lot of debate about parking and public transit.

To most citizens, zoning rules are invisible. But to entrepreneurs, they matter. A lot of money is at stake. A poor choice of location early on can result in lots of red tape, extra fees and lost time.

"Zoning ordinances determine how and where millions of dollars are invested in a community. Why are they so hard to read?"

The trouble is, even when the economic stakes are quite high, learning about how zoning impacts your planned operations is incredibly difficult.

If you’re busy getting a new cafe going, you’re worried about sourcing your beans and getting your espresso machine imported; you probably don’t know how much zoning matters or how to find information about it. You might rely on the word of your broker, or your new landlord — and their immediate economic interests might not align with yours.

If you do research zoning at home, you’re going to have to download two documents. First, you’ll need a map. If the city publishes one, it’s probably a .pdf. If your eyes are as bad as mine, size matters. Download the highest-resolution one you can get your hands on.

Next you’ll have to grab the text of the zoning ordinance. These are usually filed away inside the city’s municipal code. If you’re lucky, the site is all text and somewhat navigable. Sometimes you don’t get that, and you have to download an 848 page .pdf. Pray the text is searchable.

If cities are serious about being “business friendly,” they shouldn’t force entrepreneurs to read multiple sections of dense legal documents, and then cross-reference their findings with a static zoning map, in order to figure out where and how they are allowed invest.

There some new tools out there that can help make this data more open, understandable and executable. Derek Eder’s Second City Zoning is a great example of one of them. Today we’d like to announce another one, a Knight-Foundation funded project we’re calling ZoningCheck. Built on top of California’s existing open data resources, ZoningCheck attempts to figure out “what works where” starting with an initial beta of 30 cities, including Oakland and San Jose. That number will grow in the coming weeks. It encodes the intersection of  every specific use published in the zoning ordinance with every possible location inside city limits. It can calculate the impacts of zoning overlays and special districts on planned business activities. ZoningCheck helps applicants to supply answers for conditional rules — like whether a restaurant will include a bar, or whether a bakery will include a retail space — that can trigger the right “clearance” that the city will need.

At OpenCounter, we believe small business owners are far more influenced by transparency than tax breaks and that fixing the now broken interface to the zoning code is an essential step for cities and counties to take take to truly be transparent and business-friendly.

If you work for a city, county or nonprofit and you’d like to see your city’s data available inside ZoningCheck, our application is open for a free public beta through the end of 2014. Drop us a line at [email protected]. Peter Koht, Co-Founder, OpenCounter, is a civics nerd. An experienced economic development professional, Peter most recently worked for the City of Santa Cruz. With OpenCounter, he now helps build software that makes it easier for entrepreneurs to navigate local planning, building and licensing requirements. When not thinking about zoning, overlays, setbacks, shape files and off-street parking calculations, Peter runs trails and surfs.