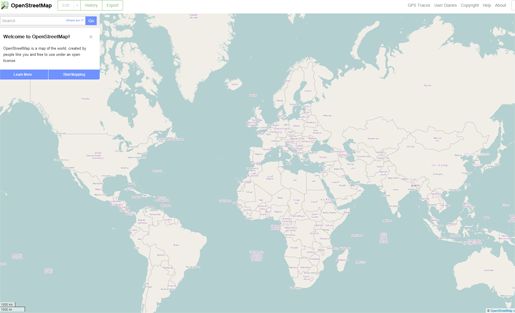 OpenStreetMap plans to create an OpenStreetMap Plugin for Open Data Kit, which will allow for easier collection of open geographic data, even in places with connectivity issues.

Sixteen winners of the Knight Prototype Fund are set to receive $35,000 to help bring their ideas even closer to fruition. The Knight Foundation on Wednesday announced the most recent winners of its fund, which looks to support early-stage media ideas in an effort to push them closer to a formal launch.

Several of the projects in this round include tools for journalists and publishers to encourage news development, storytelling, and community engagement. DIY StoryCorps, for instance, is a mobile app that lets anyone create do-it-yourself interviews to record people’s stories. Global I-Hub ICIJ is a secure platform to make cross-border collaboration on stories easier. And OpenStreetMap plans to create an OpenStreetMap Plugin for Open Data Kit, which will allow for easier collection of open geographic data, even in places with connectivity issues. Other projects focus on civic action, such as a tool that connects people to charities via news articles and a platform that lets people with chronic illnesses interact with policymakers.

"Each of these new projects aims to encourage people to contribute to and build more informed communities.” -Chris Barr

“The Prototype Fund encourages people to test and improve ideas that push the boundaries of media innovation,” Chris Barr, who leads the Knight Prototype Fund, said in a statement. “While they focus on diverse areas, each of these new projects aims to encourage people to contribute to and build more informed communities.”

DIY StoryCorps by StoryCorps (Project lead: Dean Haddock): Advancing the mission of StoryCorps, a national program that records, preserves and shares people’s stories, by developing a mobile app that allows anyone to create do-it-yourself interviews.

Do Public Good Button by Public Good Software (Project lead: Dan Ratner): Developing a tool that allows people to take action on important issues through news articles; for example, someone reading an article about drunk driving could click a button and connect with related charities and advocacy groups.

Engagement tools by Grist (Project lead: Chip Giller): Allowing newsrooms to better measure audience engagement, beyond clicks and page views, by creating an open-source WordPress plugin that will measure “attention minutes” to determine how long users are interacting with content.

Facto Bot (Project lead: Will Knight): Helping prevent misinformation on Twitter by developing software that identifies stories that have been modified, and alerts people who tweeted or retweeted links to these stories that content has changed.

FilmSync App by University of North Carolina (Project lead: Steven King): Creating an app that will connect people who are watching a news story or documentary on television with related content through a second screen app on their smartphones.

PatientsAssemble by PatientsLikeMe (Project lead: Chris Fidyk): Helping people with chronic illnesses interact with policymakers through open-source collaborative tools that will allow users to provide feedback and shape issues that are important to them.

Pilot for School by The Virginian-Pilot (Project lead: Shawn Day): Building a targeted digital system that will allow Virginia teachers to search newspaper content and use it to complement class curricula; content will align with Virginia’s Standards of Learning and help students apply academic concepts to what’s happening in their community.

QC Tools by Bay Area Video Coalition (Project lead: Carol Varney): Allowing media organizations, journalists and others to easily preserve analog video through an open-source video digitization app that is inexpensive and easy to use.

Talkbox by New York Public Radio (Project lead: Caitlan Thompson): Involving the community in news stories by repurposing phone booths in specific neighborhoods that will provide residents with a direct, two-way line to the New York Public Radio newsroom; a “Talkbox” can help with engaging new audiences or to get information in a neighborhood where a reporting project is taking place.

The Last Graph (Project Lead: Ben Conners): Helping journalists engage with audiences by allowing readers to interact with the final paragraph of a story through a database of “actions” that lead to reader involvement on an issue; for example, the last graph of an article on air pollution could include an action that encourages readers to sign a pledge to use public transit more.

Veritza (Project lead: Djordje Padejski): Helping reporters more easily find story leads from public records through a web platform that allows users to create alerts on information in these records; the platform will do this by scraping and aggregating data and analyzing it for patterns and anomalies.