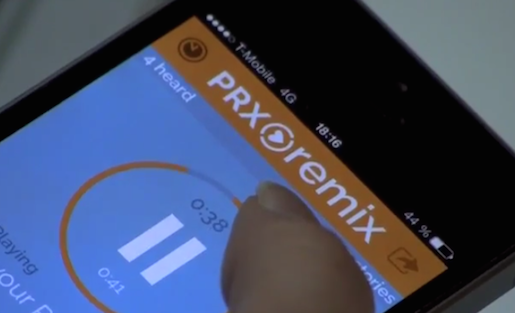 PRX launched its Radiotopia network earlier this year with the goal of growing independent audio programs specifically in the form of podcasts, rather than via traditional radio channels.

This week we find out how two major public radio providers are responding to the rise of audio listening on smartphones and other Internet-connected devices.

“We think there’s more of a golden age of audio storytelling on mobile. If public radio is smart, they’re going to parallel that movement because that’s where the audience is going.” – John Barth, Managing Director, PRX

PART 1: Ideas from PRX and PRI

The growing demand for audio content delivered online and via smartphones brings both challenges and opportunities for traditional radio producers. Representatives from Public Radio Exchange (PRX) and Public Radio International (PRI) explain some of the ways they are delivering audio across multiple platforms.
Reporting by Paige Hornor and Tatiana Darie.
[To skip directly to this segment in YouTube, click here.]

MediaShift Executive Editor Mark Glaser and a group of panelists discuss the evolution of radio and what the new National Public Radio Chief Executive Officer Jarl Mohn brings to the table as the flagship public radio service refocuses on diversity.

Having a piece of audio get passed along — or, ideally, go viral — is particularly uncommon compared with text, photos, videos, animated GIFs, or practically anything else. So, what might be done to change that?
Reporting by Paige Hornor.
[To skip directly to this segment in YouTube, click here.]

National Public Radio ran an experiment to get audio to go viral and found some success by “making the sound discoverable, portable and simple to listen to.”

PRX launched its Radiotopia network earlier this year with the goal of growing independent audio programs specifically in the form of podcasts, rather than via traditional radio channels. Leaders from PRX explain Radiotopia’s approach and how it taps into the power of online networks.
Reporting by Tatiana Darie.
[To skip directly to this segment in YouTube, click here.]