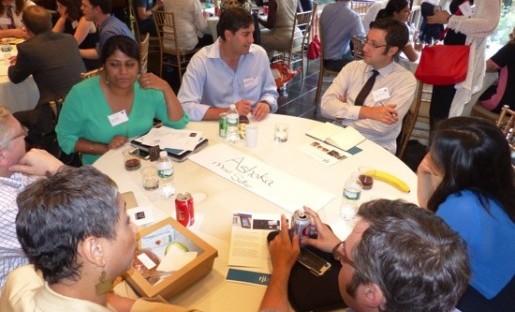 Working groups give their advice to the project presenter.

There is plenty of advice available for startups and entrepreneurs, but what do you do if you are inside a company and want to develop a new concept or project? There are no incubators, angel investors or college courses around to help you.

Collab/Space, a production of PBS MediaShift, with premier sponsorship from the Donald W. Reynolds Journalism Institute at the Missouri School of Journalism and hosted by the Ford Foundation, is trying to change that. In this session, on July 8 in New York, nine “intrapreneurs” made 5-minute presentations about their projects and listed their main challenges. Each presenter then took 10 minutes of questions from the audience. Following the presentations, the afternoon was given over to improv exercises and breakout workshops to hone each presenter’s view of what she needed to become a success. In addition, Kimberly Lau, vice president and general manager of The Atlantic Digital and Kareem Amin, vice president for product at News Corp. made presentations to the group.

"There is plenty of advice available for startups and entrepreneurs, but what do you do if you are inside a company and want to develop a new concept or project?"

Kimberly Lau gave the keynote, speaking on barriers to innovation within companies and how to overcome them. They break down to “you can’t do that,” “we don’t have time” and “we need more box ads (the old way of thinking).” In order to overcome them, one needs to realize that priorities come from the top, and so it is vital to find an advocate or champion in the organization. One of the best ways around the time problem is to find other like-minded people in the organization and foster collaboration with them. One can’t innovate as a lone outpost inside a company. Finally, in Kimberly’s experience, sometimes you have to bite the bullet and let the advertising go in order to innovate. If your idea works, then the organization will eventually back you and figure out how to monetize it.

The goal of this part of the session was to find out what the three main challenges were for each of the projects presented.

> We heard from NPR about its Analytics Dashboard, a new tool for the newsroom which the social news desk was trying to get adopted around the company.

> Joseph Agoada of Ashoka spoke on its Coursebuilder, a massively open online course for teachers to teach them how to educate their students to facilitate change.

> Mike Dewar from the New York Times spoke on Streamtools, a graphical toolkit for dealing with streams of data and the difficulty he had getting it adopted.

> David Yanofsky of Quartz spoke about Chartbuilder, an open source tool for anyone to make charts easily. One challenge was making charts mobile-ready.

> From the Wall Street Journal came a presentation by David Biderman on their new CMS (content management system) application and the difficulties the developers had in getting it adopted beyond for the World Cup coverage.

> NY Daily News‘ Cyna Alderman presented their Innnovation Lab — whose goal is to bring startups under its wing, facilitate them and use their innovations at the Daily News itself. People at the Daily News do work on the Lab as 20% of their work time, and thus don’t always prioritize it.

> Vox‘s Scott Kellum presented their cardstacks explainers, and the challenge that Vox had in getting more people to share and view them.

> Facebook’s Jason White described the social network’s FBNewswire project (in collaboration with Storyful) and was hoping to create a better version for news publisers.

> Community radio station WFMU‘s general manager Ken Freedman presented their Audience Engine commenting system and told the audience how good he was at talking down trolls (he called himself a “troll whisperer”).

You can read more about the presented projects here.

Here was the meat of the matter. Each presenter sat down at a table and had a brainstorming session with the breakout group. We questioned him in detail and over a period of an hour came up with ideas, strategies and (hopefully) solutions for the problems the project was facing. This was hands-on, give-and-take stuff that could be pretty pointed at times.

Each table’s advice was presented to the audience at large and written on flip charts and given to the presenter to take back to work and mull over.

News Corp.’s VP of product Kareem Amin described the process of intrapreneurship he went through in building better products for mobile devices, especially those used by younger users. His advice: question assumptions, bootstrap, build support, make technology bets, and develop iteratively. For example, he completely questioned the form of the content that his company presented on mobile devices. This meant not only technical assumptions, but editorial assumptions as well. He also recommended bootstrapping and building a prototype without asking permission. Finally, he strongly urged that the key element to success was to get actual data to show that your approach will work. In his case, this ended all opposition to the project he had bootstrapped.

I’ve been going to conferences on startups and entrepreneurs for years and must admit that I have never seen anything quite like this. Having been involved in an intrapreneurial “company” many years ago it was fascinating to see the presenters facing the same problems that I faced myself. Bureaucracy, lack of time, lack of funding, skepticism and downright obstruction are the same today as they were 20 years ago. How I wish that I had the support offered to the presenters around the tables at the Ford Foundation.

All photos by Paul Biba.

Paul is a retired lawyer who specialized in international joint ventures and overseas operations.  He became an e-book maven to avoid carrying bulky paper books on international flights.  He is the former Editor-in-Chief of TeleRead, the web’s first and oldest blog about e-books, e-libraries and e-publishing. Currently he provides a curated daily Twitter feed on these topics @paulkbiba.