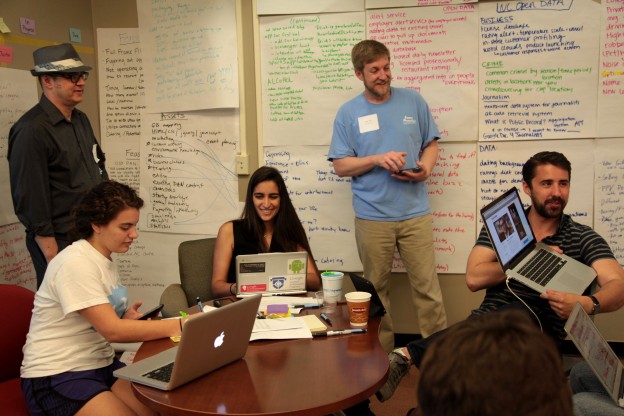 “Go for big, hairy, audacious ideas,” said Robyn Tomlin, speaking about human-centered design on the opening day of the First Annual Journalism School Hackathon. More than 60 participants from 10 schools across the country gathered at the School of Journalism and Mass Communication at the University of North Carolina at Chapel Hill to tackle three unique media challenges in a little more than 30 hours.

The three challenges were presented by local news outlets: WRAL.com, McClatchy Interactive and the Raleigh Public Record. John Conway, general manager of WRAL.com, posed the question, “How might we increase awareness of outside influence on local elections?” Suzanne Levinson, the director of digital news at McClatchy Interactive, asked, “How might we use high school sports to create tighter bonds within a community?” The third question came from Charles Duncan, the founding editor of the Raleigh Public Record: “How can we provide greater transparency into local government planning decisions and actions?”

The students split into nine teams with three to four members each from different schools — and with three teams assigned to each challenge. Each team also had a facilitator and a professional assigned to them. Professionals and faculty from participant schools helped guide the students in forming their prototypes and pitches. Throughout the two-day period, notable media figures gave talks concerning different steps in the development process. Speakers included Mark Briggs, the director of digital media at KING 5 in Seattle, and Tomlin, the editor of Digital First Media’s Project Thunderdome.

Following 30 hours of work, the teams filed back into the main conference room to pitch their ideas to a panel of judges. Pitches were judged on four criteria: desirability (who wants the product?); feasibility (is the product technically possible?); viability (how the product will be sustained financially); and presentation. The panel of seven judges included the three challenge presenters, Briggs and Tomlin, as well as angel investor Jan Davis and Betsy Hauser Idilbi, the co-founder of Tech Talent South.

Standing in front of a packed room, each group had four minutes to pitch their idea. They then received questions from the judges. Some of the standout ideas included Advocate, a Shazam-like app that could be used to verify information about political ads. Another popular idea was Support our Sports, a way local newspapers could drive user engagement through social media challenges that would pit schools against each other, with the winning school getting a feature in the paper that week. In the end, after nine pitches and many questions, Voxity, an upvote-downvote system for communities that would allow them to voice their opinions to local planning committees, emerged victorious. The judges lauded the simplicity of the interface, as well as its ability to give citizens a voice with their local government, where meetings are almost always scheduled at times that are inconvenient for the average citizen. You can see all the pitches on video here:

Samantha Harrington, a UNC student and member of the winning team, Voxity, liked working with people from other schools. She also mentioned that she was “excited to see how the Reese News Lab process [desirability, feasibility and viability] broke down in 28 hours.”

But the person who was most excited at the outcome of the Hackathon was Reese News Lab executive director John Clark.

“The Hackathon was a great experience all around. I am amazed at what these students were able to produce in 28 hours,” Clark said.

Dustin Peaire is a Reese News Lab Intern at the School of Journalism and Mass Communication at the University of North Carolina at Chapel Hill. He graduated from UNC in 2014 with a bachelor’s degree in Political Science. You can catch up with him on Twitter.