Finding Friends Among the Competition at the J-School Hackathon 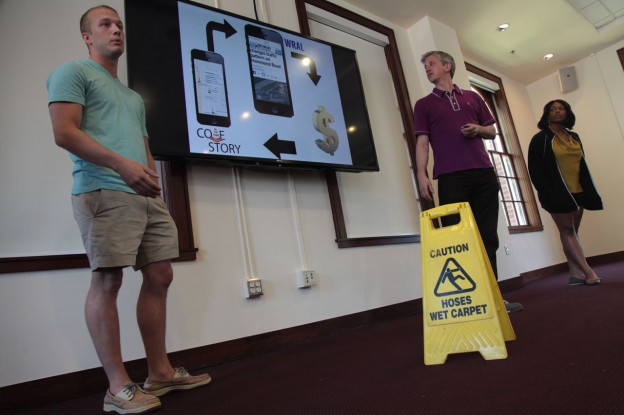 The Purple Monkeys make their pitch at the J-School Hackathon. Photo by Sara Peach

When I stood up and began walking to the front of the room with my sign prop that said, “caution, wet carpet,” I was not sure what to expect from any of my teammates when we gave our pitch. Our idea, which we named ConeStory, had only been settled on 17 hours earlier, and the concept still had a number of holes in the categories we would be judged on: desirability, feasibility and viability.

"The weekend became an emotional roller coaster as teams met people from across the country, determined their own team’s assets, and formulated new ideas."

The entire process had gone by so quickly, and my team became the crew that trailed in the idea creation process. The weekend became an emotional roller coaster as teams met people from across the country, determined their own team’s assets, and formulated new ideas.

Our team, the Purple Monkeys, selected a problem presented by Charles Duncan from the Raleigh Public Record. It read, “How can we provide greater transparency in local government planning decisions and actions?” Once all the teams had selected one of the three problems presented, everyone excitedly scattered across the School of Journalism building and even out on the campus quad to begin finding solutions. We, unfortunately, chose some benches beside the quad that left us itching not only to begin formulating our idea, but also our newly acquired bug bites.

Part of the process in cultivating a new idea is meeting and becoming familiar with the people you will be working with. The Purple Monkeys knew soon after gathering on that beautiful morning in Chapel Hill, North Carolina, that we had some great skill sets and viewpoints to bring to the group atmosphere. From experience in the planning field to website coding and marketing, our team was stacked — great for winning — as long as we could figure out how to mash all the skills together.

However, once all members of our team were introduced, I soon realized that this weekend was far more about the networking and meeting people in the field than the actual pitch. We were there to make friends and build connections for the future. It was remarkable to hear about the setup and motivations of the entrepreneurial journalism classes that are held at Syracuse University with Dan Pacheco, the Journalism Innovation Chair, and Ruthnie Angrand, master’s student. The conversations reaffirmed the inspiration behind Reese News Lab at the University of North Carolina at Chapel Hill and the skills I hoped to gain by participating in the program. Chris Williams, another valuable teammate, was integral to developing a prototype and brought excitement to our pitch with a different perspective from Knight Lab at Northwestern University. His 10 years of knowledge in the field of website creation and even living experiences in Portland were a delight to hear about.

It is easy enough to meet people and call yourself a team, but it is another task to begin to build trust. My teammates and I greatly underestimated the time it would take to figure out our role on the team and narrow our ideas.

It was not until 8 p.m. Saturday, 12 hours into the hackathon and three meals later, that we decided to build a map that would clarify what construction projects were happening in the area for commuters in a user-friendly interface. The little cone icons would indicate the location on the map and consumers could tap on the icon to learn additional information such as the project purpose, completion date, and the company involved with the project.

From this weekend alone, I was exposed to all kinds of technological concepts that I had never previously seen, from simple things like Google Draw to more complicated coding, Google Glass and even Oculus Rift, a virtual reality headset that produces 3D imaging. Admittedly, some of these were not integral to producing our new product, but they sure were fun to try out.

At 11:30 a.m. Sunday, pitch slides were due in the large gathering room. It was 11:35. Some of the Purple Monkeys had just returned from doing some last-minute market research, and another part of the group was finalizing the viability slide in our presentation.

It was clear the nerves were setting in. We were already a few minutes late for submission, and we had less than 30 minutes to practice our parts together. The team sent our “Pro” running to turn in slides while we made a go at a second run-through.

It was obvious we liked the idea, but we stumbled over words and we still were not sure who was talking about what exactly. With only four run-throughs, the team gathered their belongings and made their way up to the already buzzing presentation room.

As the last presenters, we found ourselves running through our parts in our heads and texting across the room last-minute facts that we thought might make or break our sell. Finally, we were within seconds of our turn and in that moment, surprisingly, I found myself giddy with excitement.

Funny enough, after it all ended it did not matter that we were never really sure about where our money was coming from to support our product or the number of times we ran through our pitch. We had made friends and given our best effort at solving a problem that affects our community.

Georgia Ditmore is a Reese News Lab intern in the School of Journalism & Mass Communication at the University of North Carolina at Chapel Hill, developing and testing new ideas for the media industry in the form of a “pre-startup.” She is a Senior Environmental Science Major with a concentration in Environment and Infrastructure. Follow her at @gkd2011.