What Newsroom Spaces Tell Us About the Future of Digital Journalism 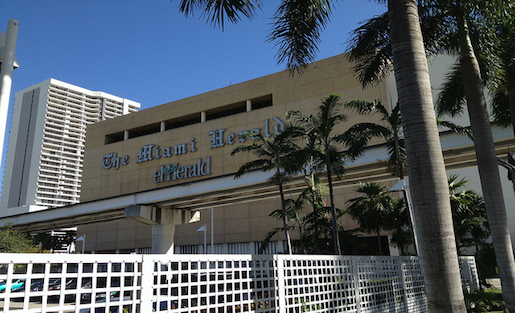 The Miami Herald moved to Dural, Fla., away from downtown, which raised concerns for staffers. Photo by Phillip Pessar on Flickr and used here with Creative Commons license.

A fellow from the Tow Center for Digital Journalism at Columbia University has researched an obscure, seemingly trivial facet of today’s ever-changing news industry. Though we don’t often talk about it, the physical space of the modern-day newsroom may be just as important to follow as the evolution of journalism content from print to digital.

The reality is that flagship newspapers no longer need tens of thousands of square feet to accommodate composing rooms, typographers and large equipment for production and distribution with the rise of the web. And because newsroom staffs have shrunk so drastically in recent years, big papers are left to decide what to do with the extra space they have. Many under umbrellas like Gannett and McClatchy have decided to do away with lofty buildings and high rents and downsize. But the question is, “What implications does physical space hold for the digital future of news?”

"With reporters and photographers utilizing video studios inside backpacks, Google Glass, smartphones, smartwatches and someday, drones to cover news, how much will the newsroom matter?"

In “Moving the Newsroom: Post-Industrial News Spaces and Places,” Tow Center Fellow and Assistant Professor of Media and Public Affairs at the George Washington University Nikki Usher suggests that the spaces where news is fact-checked, written about and depicted visually matter deeply when it comes to newsroom morale, community vitality and cross-beat communication. After poring over Usher’s observations and recommendations based on newsroom changes at The Miami Herald, The Des Moines Register, the Fort Worth Star-Telegram and The Seattle Times, following are a few takeaways from the academic paper. Based on Usher’s paper, key changes in physical space matter because they can …

During her jaunt around various newsrooms all over the country, Usher found that at places like the Star-Telegram, which downsized from a block-long building that had been eerily emptying for several years to a nearby building where the paper occupied five of its 19 stories, different scenery was good for morale. Chairs without reporters had had an effect on the original newsroom’s overall attitude, it turned out, and was a disappointing symbol of the struggling news industry’s ailments and a constant reminder of layoffs.

“It was nice that we owned it, but there were empty desks. There were morale issues,” Executive Editor Jim Witt told Usher for her research.

With their consolidated space, reporters feel like their work is more valuable and their jobs are not on the line. The environment at the Seattle Times was similar, where Usher found that reporters and editors had trouble feeling good about their work each day, as an immense amount of unused space seemed to haunt them.

It’s also possible that a simple rearranging of space, which may boost newsroom morale as in the case of the Fort Worth paper, leads to increased productivity. A five-screen media “wall” in Iowa updates the home pages of area competitors on large TVs as well as real-time analytics from Chartbeat. In Miami, 22 screens cover a wall near the newspaper’s central hub.

Based on Usher’s numerous interviews, reporters and editors are driven heavily by the constant display of story analytics. They’ll plan the next day’s content based on what did well the day before, and discern which stories to follow up on, all because of the media wall’s placement in the newsroom.

“Sports columnist Bryce Miller summarized what many reporters told me: ‘The way it was designed, you can’t help but engage in online numbers. They are in your face all the time,’” User wrote in the report, hinting toward the growing significance of online traffic in determining what gets covered.

Allow for better integration between desks

There was no doubting that these four newsrooms saw clearer communication and improved breaking news coverage as a result of their newsroom moves, primarily because they each implemented some sort of central “hub,” where print and digital journalists could collaborate.

“Every newsroom I visited featured something like a ‘hub,’ nicknamed any number of phrases like ‘Continuous News Desk,’ ‘mission control center,’ or, in Fort Worth, ‘the bridge’ or ‘Starship Enterprise,’” Usher wrote.

Drawn here is the “Starship Enterprise” of the Fort Worth Star-Telegram.

These central command stations, if you will, take on different shapes, sizes and names depending on the newsroom, but they all are meant to foster cross-beat relationships. In the past, it has been difficult for some editors to locate their reporters if they are on the other side of the newsroom. Or, in breaking news situations, a social media editor’s tweets can be rendered useless if the general news reporter isn’t within shouting distance of her when covering a story that is changing by the minute. When communication is lost, the story presentation and content suffer, reporters and editors told the Tow Center fellow. Hubs that literally sit in the middle of the newsroom let the online editor, Page One editor and crime beat reporter, for example, look over their desks and work together when necessary.

Wrote Usher, “…While it looks different in every place I visited, each had the same aim: to centralize the placement of news on the homepage, the tempo of stories, the strategy behind social media, and the communication between editors about reporters’ whereabouts and the submission of new stories.”

But not everyone was crazy about the newsroom togetherness. One reporter told Usher anonymously that he hated the constant supervision and commotion. In some newsrooms, writers prefer to enjoy silence and retreat after gathering their notes and sitting down to write the piece.

“[During] most shifts I was with the editors it was horrible. It was not an ideal place to write. They were looking over my shoulders …” the reporter told Usher.

Perhaps moving newsrooms, whether down the street or completely across town, provides an intrinsic shift in perspective. Usher suggested in her report that downsizing newsrooms, in the literal sense, is perceived by many (usually older people) as a failure.

Big buildings in the center of town looked upon as the primary source of information is a thing of the past, and newspapers like the Register recognize that. For journalists of the 1960s, 1970s and 1980s, the newspaper building was one of the city’s crown jewels, representing that municipality’s integrity in news reporting, press freedom and community advocacy. Though, the truth of the matter doesn’t make the move from an ornate old building to a tighter, less historic space any easier.

The Seattle metropolis’ proximity to water and potential for traffic kept the newspaper from leaving downtown. Photo by Tiffany Von Arnim on Flickr and used here with Creative Commons license.

“As Des Moines journalist Rox Laird, a 40-year veteran said after the move, ‘I miss most the image of the Register translated into a physical building,’ likening stone and granite to stability and permanence,” Usher wrote.

In Florida, the Herald’s May 2013 move out of downtown Miami to Doral, Fla., raised concerns among older journalists who feared the loss of a central location would hurt the paper’s brand. Some thought the paper may be forgotten, and there were worries about reporters being able to get downtown quickly for breaking news events. The transportation issue alone kept the Seattle Times from leaving downtown. And while Usher said that reporters don’t complain about the Herald’s new digs today, we’re still not living in days where buildings and symbols don’t hold clout in the publishing industry. Physical space matters very much, significantly affecting newsroom attitudes, and the days where centralized newspaper buildings with big bold letters reminded the city of who its press reps were? It still wasn’t all that long ago.

But despite opportunities, mobile journalism presents a challenge …

As newsrooms continue adapting to a digital-first world, the question of a physical newsroom’s relevance will keep coming up. With reporters and photographers utilizing video studios inside backpacks, Google Glass, smartphones, smartwatches and someday, drones to cover news, how much will the newsroom matter? Could journalism become entirely remote, and will legacy publications be obsolete? According to Usher, this won’t be happening anytime soon.

In Seattle, physical space still matters a great deal. Journalists need a home base because parking in the city is limited, and they want one because it’s a designated space to write.

“In Seattle, there’s a real culture of returning to the newsroom to write the big story,” Usher wrote.

On the East Coast, Herald reporters said they highly value the chance to bounce ideas off their colleagues and conceptualize stories as a team.

Miami reporter Chuck Rabin told Usher, “There’s nothing like being in a newsroom.”

Also in Miami, a new video studio gives reporters a reason to come to the newsroom. The Register’s editors built a video studio, too, both to supplement reporters’ stories and find another way to gain video ad revenue. Still, reporters and editors acknowledge that coming into the office isn’t always feasible. Filing on the road or on location is often necessary and desired in the interest of time.

Down in Texas, though, folks at the Fort Worth Star-Telegram are ready for an all virtual newsroom. Having provided reporters with iPads courtesy of McClatchy, the small staff is expected to have every journalism skill there is.

“There are fewer people, and we need them to work with coherence wherever they are. They may have desks, but they may never come to them,” Witt told Usher.

With newsrooms navigating complicated revenue models and journalists amassing more digital tools that let them work off-site, the relationship between the physical and the digital space will be tested, the Tow Center report concluded. But for now, newspapers are reimagining the space they’ve got for a digital future.

Note: A previous version of this article did not include Nikki Usher’s additional title as an Assistant Professor of Media and Public Affairs at the George Washington University. The article has been updated to include this information.

Angela Washeck is a freelance writer and editor based in Dallas. She is a proud graduate of Texas A&M University, where she earned a Bachelor of Arts in Communication with a journalism minor. Angela has written for MediaBistro’s 10,000 Words blog, Paste Magazine and TexasMonthly.com, and she once interned with TV newsmagazine “Dan Rather Reports.” Her work has been republished on Editor and Publisher, the American Press Institute and more. When Angela is not busy with PBS MediaShift work, you can find her watching “How I Met Your Mother” reruns, watching Aggie football and attending indie/folk concerts in Dallas. Follow her @angelawasheck.