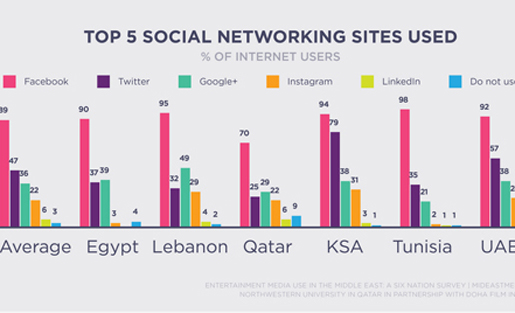 Facebook is by the far the most popular social media platform of all six nations surveyed in the Northwestern Qatar study, which included Egypt, Lebanon, Qatar, Saudi Arabia, Tunisia, and United Arab Emirates.

Even though Western music and movies are a major export to the Middle East, many people there support censoring these programs if they are deemed offensive. This is one of several findings in a new study on Middle Eastern media habits by Northwestern University in Qatar.  NU-Q and the Doha Film Institute compiled the data via 6,035 face-to-face interviews in Qatar, the UAE, Saudi Arabia, Lebanon, Tunisia and Egypt. (You can read more about the findings on this related post by Angela Washeck.) On this week’s podcast, we’ll discuss the findings of the study with special guest Everette Dennis, dean and CEO of Northwestern University in Qatar. We’ll also be joined by regular guest Andrew Lih from American University, Mediatwits producer Fannie Cohen, and host Mark Glaser, executive editor of MediaShift.

Everette E. Dennis is dean and CEO of Northwestern University in Qatar. Dennis has extensive international experience with media in Eastern Europe, Latin America and East Asia. He is a member of the Council on Foreign Relations and has served as a trustee of the International Institute of Communications. Prior to his appointment at Northwestern, he led the Center for Communications and was an endowed professor at Fordham Graduate School of Business in New York City; was founding director of the Media Studies Center at Columbia University; founding president of the American Academy in Berlin and dean of the School of Journalism at the University of Oregon. He has held professorships at four U.S. universities and is the author some 45 books on media industries, media law, freedom of expression, journalistic practice and related topics. He was a senior vice president of the Gannett and Freedom Forum foundations. He has served on the board of the International Center for Journalists, as national president of the Association for Education in Journalism and Mass Communication and is currently chair of the Fred Rogers Center for Children’s Media.

The study reinforces how the Arab world is “coping with globalization and still grappling to preserve local culture.” The study shows that 65 percent of residents in the countries surveyed want more content portraying their own culture and history, while 66 percent say they benefit from watching content from different parts of the world. This winter, when the American film “The Wolf of Wall Street” was exported overseas, its Middle East distributor Gulf Film recut the movie, removing 40 minutes of offensive content. This caused some uproar in Hollywood, but according to the study, there is huge demand for censorship of offensive content: over 70 percent region-wide want greater regulation of romantic and violent content. In Qatar, the response was even stronger, with 80 percent of respondents saying it’s appropriate to delete scenes that could be considered offensive.

Inherent in the struggle to modernize without losing their cultural traditions, 79 percent of respondents feel that more should be done to preserve traditions, while 70 percent agree that more should be done to integrate their cultures into modern society. Many are using social media to connect to the modern world, and Facebook is by far the most popular platform of all the nations queried. This may come as a suprise, since sharing on Facebook and other social media is increasingly photograph-based, and many of these cultures have strict rules of decorum for displaying public photos. News is a favored entertainment genre in both Lebanon and Qatar, even beating out internet use in Qatar. Despite increased embrace of new media and the internet, the TV still reigns as the primary source for news information.