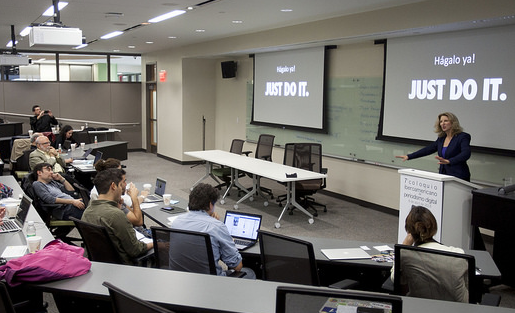 Participants discuss new media entrepreneurship during the Coloquio at the University of Texas-Austin. Photo by Martin Do Nascimento/Knight Center for Journalism in the Americas

One of the characteristics of entrepreneurship in Latin America is that people usually open their own businesses out of necessity — when they run out of other options (like getting a full-time job, for instance). The case of media entrepreneurs in the region is a particular one: Although most preserve their day jobs to make ends meet, they’ll dedicate long hours to their project, investing their energy and time, and allocating scarce resources that are never enough.

Latin American journalists who are testing new ideas online have a hard time when it comes to finding the right financing; they rely on bootstrapping and on their friends’ help. They also find it difficult to mingle and connect with a network of like-minded professionals. But some stakeholders are trying to change this.

"While the interest in media by Latin American entrepreneurs is not new, entrepreneurship in the industry still isn't as widespread as in the United States."

Brought together by the Knight Foundation and Google Latin America, 10 Latin American journalism professionals got together at the University of Texas at Austin during ISOJ, or the International Symposium of Online Journalism, one of the United States’ biggest media conferences, to network and work to transform the state of the media industry in the region.

With their projects, these media innovators are trying to use cutting-edge ways to meet the long-postponed communication needs of the region. As far as the online ecosystem in Latin America is concerned, the most successful news websites are those of big players, but there are some exceptions.

the struggle to reach a u.s. audience

These media innovators are not new — they’ve been developing for a while now — but they’ve found it hard to reach global investors, or even to reach a U.S. audience, because of the language and cultural barrier.

A decade ago, Spanish-born José Luis Sánz launched El faro, one of the first online newspapers in the region to cover the under-reported news of El Salvador through old-school reporting.

The Open Society Foundation grant-winning La Silla Vacía, by Colombian Juanita León, has been working on that country’s politics for the past four years.

Canal-ar, launched by Argentine journalist Darío Drucaroff, has produced content about Technologies and Information and Communication for the past decade — and now he is launching Argenieros, a portal for engineers to share the news that matter to them.

Álvaro Vildoza, from La Plata, Argentina, is building Transeúntes, a digital magazine about entrepreneurship, travel and social issues. “Our goal is to experiment on new formats,” he said. He and his team are including graphics, data-driven illustrations and maps. They’re also interested in testing new media. Meanwhile, a team of engineers from Córdoba is launching a mobile app to listen to the news.

Carolina Guerrero, from Colombia, launched Radio Ambulante, which is like the Radio Lab of Latin America. With high-quality productions, she brought on board storytellers who are creating top-notch podcasts about issues like migration and literature, among other topics.

Carolina Guerrero, executive director, Radio Ambulante. Photo by the Martin Do Nascimento/Knight Center for Journalism in the Americas

While the interest in media by Latin American entrepreneurs is not new, entrepreneurship in the industry still isn’t as widespread as in the United States, where there’s extensive coverage of the latest industry trends. In the U.S., niche sites, hyper-local community-based blogs, and verticals centered in politics like The Huffington Post and Politico have expanded over the past few years. But in Latin America, media innovators have had a hard time searching for sponsorships, financial support, mentoring, apprenticeship, launching and iterating.

For Yanine Warner, a professor who travels across the region to teach high-quality reporting and also the business side of media industry, it’s a matter of culture: “In the U.S. we are taught that is OK to raise money selling lemonade when we are kids. In Latin America, seeking profits is often looked down on. These are cultural factors that we cannot overlook.”

Other challenges faced by wannabe media entrepreneurs from these emerging countries is, of course, access to funding and the capacity to build a network of people like them, who share the same interests in spite of being disconnected geographically. “I think the event at Austin was a great opportunity for these people to meet others like them,” said Florencia Bianco, manager of Communication in Google Latin America. “They could interact, chat, meet in person.”

Florencia Bianco, manager of Communication for Google Latin America. Photo by the Martin Do Nascimento/Knight Center for Journalism in the Americas

Google decided to sponsor this event to encourage the production of content in Spanish — another difficulty faced by the media industry.

“Only 5 percent of online content on the Web is in Spanish, when there are actually over 500 million Spanish-speakers in the world over,” Bianco said.

Over 5,000 participants enrolled for the Knight Center’s online course, sponsored by Google, Developing Journalistic Projects for the Web, and 230 submitted their own products. Out of these initiatives, a specialized jury chose 10 winners, those who made it to Austin.

Projects ranged from informing the disabled, to sharing experiences on eating healthy food, to building communities around interests like science, to the development of new mobile tools to listen to news on the go.

Those who took part in the event shared some characteristics in common: They have worked in the industry for a while; learned the craft inside big institutions like state-run universities or media outlets; and they came up with their ideas when they noticed a void in content production.

“There are lots of entrepreneurs in the region, and also what we call ‘intrapreneurs,’ people driving change inside organizations,” said ISOJ organizer Rosenthal Alves. The organizations that sponsored the event believe in the region’s potential for development. That’s why they’re doing their best to bring together these isolated efforts.

Mariana is a Tow Knight Fellow in Entrepreneurial Journalism and a Fulbright student working toward her master’s degree at CUNY’s Graduate School of Journalism. She is building www.latinamericanradar.com, a news website about Latin America for an international audience. She worked as a journalist for eight years, collaborating with outlets like the BBC, The Independent and Newsweek. This summer she will work as a digital producer intern at The Washington Post. She won several writing awards back home (by the National Ministry of Education and by Buenos Aires city’s Ministry of Economy). She travelled to the Netherlands to study mastering social media for reporting and to the Philippines to do an internship in a TV news channel. She was Google’s Latin American Spanish Language Specialist, managing a network of translators, reviewers and writers. Mariana also served as a digital producer at Argentina’s most-seen TV news channel, TN, and was on staff at the The Buenos Aires Herald newspaper for three years. Follow her @mariamrom.