How Virtual Reality Can Transform the News 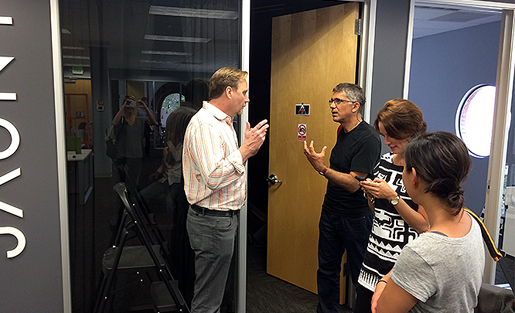 Jaunt founder Jens Christensen treated fellows to a demo consisting of several virtual reality scenarios, each of which placed the user at the center of dynamic environments (a skate park, a string quartet in a symphony hall, an alien invasion of a spaceship, etc.).

“It opens up a new medium — but it also poses new challenges,” Christensen says. For example, whereas traditional video allows producers to focus viewers on a particular speaker or scene, Jaunt’s system allows for 360-degree, 3D vision — meaning that producers must think about what’s going on everywhere in the scene.

Jaunt’s system uses a spherical set of fixed cameras that take video in every direction. The idea, Christensen says, was sparked when one of his co-founders visited Zion National Park, took a bunch of iPhone photos, and found that they “couldn’t really capture it at all.”

The result is a 360-degree experience that offers a wealth of potential applications: news, sports, gaming, entertainment.

VR and the news

News in particular could be a powerful application for virtual reality, Christensen says, as a means of placing people in a situation.

“We think that’s just such a natural application,” Christensen says. “[It can] take you to a disaster — a flood, say, or a demonstration. The Ukraine — you can imagine having a camera there now.”

Indeed, BSkyB, the British broadcasting company, has recognized that potential: it’s one of Jaunt’s investors. And virtual reality’s broader implications have made recent headlines with Facebook’s acquisition of Oculus Rift.

Jaunt’s eventual goal, Christensen says, is to offer live streaming of news or cultural events — in short to put cameras “somewhere people don’t normally go.” Rather than putting one in the audience at a concert, then, they’d place a camera onstage, because “you can’t buy a ticket to be onstage.”

The company has Stanford roots: Christensen got his Ph.D. here, and the company is housed not far from where the seeds of motion pictures were planted in the 1800s.

Ultimately, Jaunt wants to evoke a “feeling of presence, of being somewhere else,” Christensen says. “We’d like Jaunt to be kind of the IMAX of immersive media.”

This story originally appeared on the blog for the John S. Knight Journalism Fellowships at Stanford.