Freelancers in Conflict: A Guide for Assessing the Risks 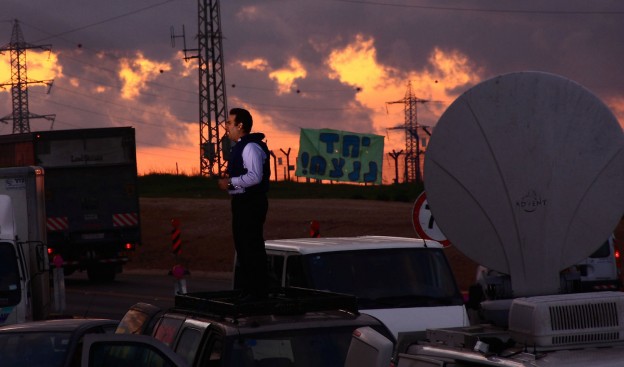 Photo by Yossi Gurvitz on Flickr and used here with Creative Commons license.

The market for freelance journalists is both increasing and increasingly competitive. There’s a 24-hour news cycle to fill, and few media organizations have the staffing to do it without turning to freelance newsgatherers. As the reliance on them increases, we are hearing more and more about the accompanying risks of independent reporting in dangerous places.

"The discussion taking place in the industry is working; if you're going to go work in conflict, then you need to protect yourself and your colleagues.” -James Brabazon

Recently on MediaShift, independent journalist Jose Gonzalez offered a round-up of the dangers facing freelancers trying to cover Syria. With “most major news agencies pulling their staff journalists out of Syria, the burden is increasingly falling on freelance and citizen journalists,” he wrote in a piece that was originally published on CJFE.org, the website of Canadian Journalists for Free Expression and then on the IFEX network. They are “often more vulnerable to the surrounding violence in conflict-stricken areas, and have limited access to resources such as protective clothing or training on how to report safely within a war zone.”

Syria is ranked by the Committee to Protect Journalists as the most dangerous country in the world to cover news, but it’s unfortunately far from being the only place where gathering news can be a high-risk profession. Covering news in Egypt remains a risky trade while reporting from Ukraine and Brazil (among many others) is an increasingly dangerous endeavor.

“I think generally journalists are taking risk more seriously as a whole,” said Emma Beals, a freelance journalist and board member of Frontline Freelance Register. “The desire to work responsibly is growing and both staffers and freelancers are taking risk, information sharing and safe working practices seriously.”

If you’re a freelancer, you can operate with a freedom that many staffers may not have, but you’re also left to get for yourself many of the resources that come with being on staff. There’s insurance, for example, and access to safety gear and hostile environment training. One key item is a comprehensive risk assessment. Most large news organizations have these for reporters heading into dangerous locations. But if you’re a freelancer (especially if you’re just starting out), you may not even know where to start.

“What we’ve seen since the end of Libya is an unprecedented amount of information on the risks that freelancers take,” he said in a phone interview. “It’s part of the legacy of Tim Hetherington and Chris Hondros. The discussion taking place in the industry is working; if you’re going to go work in conflict, then you need to protect yourself and your colleagues.”

It also helps in other ways: Editors appreciate that you’re taking seriously the potential risks. Some commissioners require for you to undergo a risk assessment before they hire you, and insurance providers can demand one as well.

“This is not a hoop you jump through just to get insurance; it’s something that helps you stay sustainable,” Brabazon said.

A risk assessment starts on paper, but a good one informs your thought process and behavior in the field. It’s an exercise that forces you to start identifying threats and assessing the risk of each one happening, and what the potential impacts may be. It asks that you think of how you’ll minimize the chances of these happening or think of how you’ll try to reduce the damage should something happen. While they can be quite lengthy, Brabazon says the concept can be boiled down to the basics: what you’re identifying are threats (injury, kidnapping, medical problems, etc.); when thinking about risk, you’re looking at the likelihood of threats happening, and how you’ll either reduce the chances of them taking place or ways you’ll minimize the damage.

“Freelancers are a one-man band,” Beals said in an email. “Unlike staff journalists, they don’t have a team behind them with editors and producers assessing risk and organizing equipment and support for them. They’re often deployed on short timescales and may jump from one context to another.”

When talking to journalists traveling into a region, risk assessments are often discussed as something to do “before you go.” But they’re also important for local journalists who are living in the area itself. Risk assessments aren’t just about the freelancer herself or himself. It incorporates risks to anyone who may be impacted by the work being done. It could be your colleagues, sources, fixers and so forth. If you’re working locally, it could be family.

Risks other than bombs or bullets

“The key points are to think: What is the aim you’re trying to achieve, and how can you achieve it in the safest possible manner?” he said in a phone interview. A lot of discussion around risk assessments focus on the bombs and bullets, which are important things to consider, however, “most of the time you’re still more likely to catch a disease or get into a car accident.” These things should be included in any risk assessment. Cook cited the case of Anthony Shadid, a correspondent who survived two decades of covering conflict, but died in Syria of an apparent asthma attack triggered by the horses his group had been using to leave the country.

“The main areas often overlooked are medical and travel, Cook said. “What’s the chance you may get malaria? What are the exit routes from a location?”

Starting a risk assessment puts you in a different head space, one you’ll be able to employ in the field as you continue thinking about what’s happening around you. First, it starts on paper. Read more about risk assessments for freelancers, or start working on one, here.

Andrew Ford Lyons is the digital producer for Rory Peck Trust, the only organization dedicated to the support, safety and welfare of freelance newsgatherers around the world. Andrew oversees the Trust’s online projects and runs its digital security programs. As are anyone’s, the views expressed here are the author’s alone, and may not reflect those of Rory Peck Trust.