What Alt-Weeklies Can Accomplish with a Startup Mentality 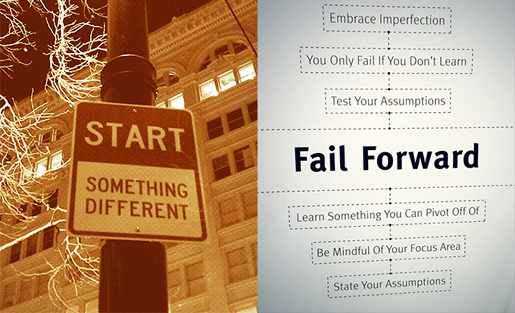 The startup culture encourages would-be entrepreneurs to “focus on the user,” “fail fast,” and embrace the idea that “life is a prototype.”

Recently, a group of Knight Fellows visited the offices of Matter, a media-focused venture capital firm in San Francisco, just around the corner from the playground where Twitter was born.

"Publications that begin to think like startups -- by eliminating their fear of small failures, embracing uncertainty as an opportunity for experimentation, and figuring out what their readers actually want -- will have a better shot at success."

It was an immersion in startup culture, which exhorts would-be entrepreneurs to “focus on the user,” “fail fast,” and embrace the idea that “life is a prototype.”

Although we tend to think about these lessons in the context of iPhones and apps, they should resonate with alt-weeklies. When most alts were founded (20, 30, even 40 years ago), they were startups: lean, scrappy organizations designed to disrupt the status quo. What happened?

Eric Ries, author of the entrepreneurial bible The Lean Startup, defines a startup as “a human institution designed to create new products and services under conditions of extreme uncertainty.” What about that definition doesn’t apply to the news industry in general, and to alt-weeklies in particular? We’re human institutions. We’re constantly creating new products and services, whether it’s this week’s narrative feature or a new music festival. As for “conditions of extreme uncertainty,” it’s difficult to imagine an industry that’s experienced (and continues to experience) as much disruption.

This definition is at the crux of any news organization’s battle for survival. I believe that publications that begin to think like startups — by eliminating their fear of small failures, embracing uncertainty as an opportunity for experimentation, and figuring out what their readers actually want — will have a better shot at success.

While my work as a Knight Fellow is far from complete, I’ll offer three quick (and by no means comprehensive) examples of companies that are adopting aspects of the startup mentality.

(alt-weeklies in Sacramento and Chico, Calif., and Reno, Nev.)

I’ve written before about N&R’s two big (and decidedly non-digital) innovations: sponsored reporters and client publications. The sponsored-reporter idea arose out of a series one of the N&R papers did on poverty; after seeing the impact good journalism could have, a local food bank offered to pay for the paper to hire another reporter — “no strings attached,” according to N&R CEO Jeff vonKaenel. But N&R is making more serious money on its client publications and has started building a separate editorial staff to produce them. It’s a good fit, vonKaenel says, because N&R can “use our editorial skills — to take complicated issues and distill them and turn them into stories — to help organizations that have more depth than a regular advertiser.”

“Even if we have less revenue, we’re more efficient [now],” Dan Pulcrano, the founder and CEO of Metro Newspapers, told me recently. “The business is way more efficient, and that’s why we’ve been able to deal with revenue declines and still put out a product every week.” Pulcrano, who talks about establishing a “culture of change,” has an advantage in that he’s also the founder of Boulevards New Media, a network of city guides that together attract monthly unique visitors in the millions. But he still has to innovate on the Metro News side: with budding digital services for local advertisers; a new tech conference and music festival, C2SV; and keeping journalistic quality and brand integrity at the center of every new venture.

While not an alt-weekly, Berkeleyside is one example of a place alts might go for inspiration. According to co-founder Lance Knobel, local comes first — not only in Berkeleyside’s journalism, but also in its digital advertising. (Check out the site and see if you can find any ads that aren’t local.) Berkeleyside reps offer cross-platform (website, mobile app, email newsletter) advertising strategies and emphasize that Berkeleyside is as much a local business as their clients’ companies are. By selling “sponsorships,” or flat-rate digital ads, they avoid the eye-glazing discussions about CPM. (“Talking to [advertisers] about CPM is like speaking Arabic,” Knobel says.) Knobel also describes a low-cost membership strategy focused on “letting people pay” — offering them an opportunity to feel like they’re fulfilling a civic duty — and Uncharted, an annual “ideas festival” tailored to Berkeley’s intellectual, college-town identity.

Across the news business, thinking like a startup has yet to take hold. For obvious reasons, it’s scary (or unacceptable) to “fail fast” when you’re fighting for your company’s very survival; finding time for experimentation and user testing feels impossible when you’re on deadline.

But I’ve always believed that when it comes to innovation, alt-weeklies have enormous opportunity. They’re scrappier, and their staffs are usually young, diverse, and irascible enough to lead change in their respective markets.

Most importantly, though, we need to shift our thinking from conserving what we have to exploring new territory that’s up for grabs. We need to kill our fear of failure and start innovating — even in small ways, even if it doesn’t work. As the inimitable Dan Gibson (editor of Tucson Weekly) put it, “Let’s try something; let’s do something different. If we have an issue that sucks, next week we have another one!”

This story is cross-posted at the blog for the John S. Knight Journalism Fellowships at Stanford and altweeklies.com.