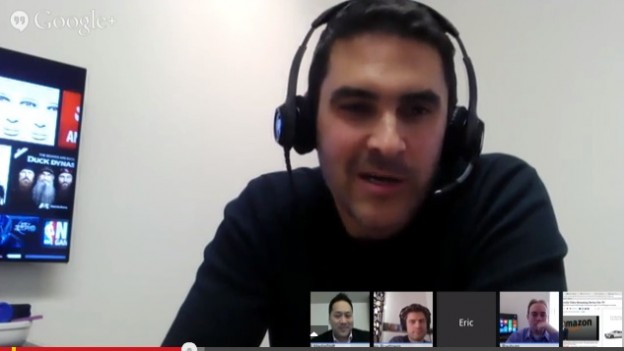 Panelists discussed Amazon's new Fire TV and the way it differs from its competitors from Roku, Apple and Google.

On Wednesday, Amazon released its newest device, the $99 Fire TV, that aims to make a better set-top box for streaming video on TVs. It’s not drone delivery, but it does make the leap from offering streaming content with Amazon Prime to offering a piece of hardware that connects to the TV — putting Amazon into the living room in a big way. The device streams video content and music using apps including Hulu, Pandora, Netflix, and, of course, Amazon Prime. It features videogame capabilities as well as voice-activated searching, which differentiate the device from its competitors like Apple TV, Roku and Chromecast. As these devices become more popular and user-friendly, are they becoming a real threat to cable? What kind of place do set-top boxes have in the media consumption landscape? This week, we’ll be joined by Eric Elia, a frequent MediaShift contributor, Janko Roettgers of GigaOm and Streamingmedia.com’s Dan Rayburn. Andrew Lih will host in place of Mark Glaser.

"We have more choices in the market. The flipside of that is, with more choices comes more confusion," says Dan Rayburn.

Janko Roettgers writes about the future of TV and music, as well as consumer electronics and other technologies that make that future happen. He has been covering all things tech for more than 10 years. Janko  first began contributing to Gigaom in 2007 and joined the staff in 2009.

All of Fire TV’s competitors stream content from Netflix, Hulu Plus, YouTube and Pandora, but each device has its own add-ons beyond that core set. Chromecast is connected to Google Play, HBO GO, and Rdio, but it can’t access Spotify, Amazon Instant Video, or most sports channels. Meanwhile, Apple TV connects with iTunes, HBO GO, and a handful of sports channels, though it does not connect with Rdio or Spotify. Roku connects with thousands of channels. Amazon’s Fire TV connects with more content providers, including Amazon Instant Radio and various sports channels. However, it is missing HBO GO, Spotify and Rdio. Fire TV and Apple TV are the most expensive devices at $99.99, Chomecast is the cheapest for $35 and Roku sells a range of devices. Fire TV distinguishes itself from the competition specifically with its voice-activated searches and gaming capabilities.