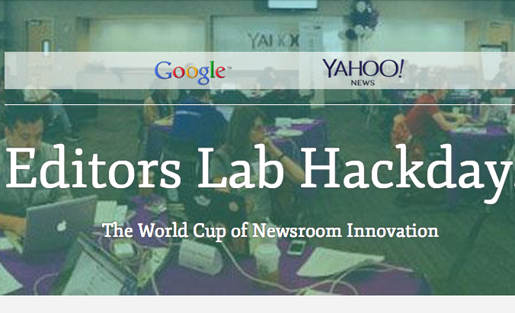 The final of GEN's Editors Lab Hackdays takes place at the GEN Summit in Barcelona in June.

There’s no shortage of international journalism conferences these days, and there’s a reason.

With legacy publishers having difficulty making their digital efforts profitable, niche digitally native operations looking to capitalize on the “social sharing” culture, and concerns about engagement metrics and advertising strategies all weaving into a dynamic media thread, venues like the recent ISOJ (International Symposium on Online Journalism conference and this year’s GEN (Global Editors Network) Summit are vital exercises for media professionals to come together and share ideas and solutions from across the world.

"Sessions and keynotes will revolve around the idea that mobile, video and data must be top-of-mind in the modern newsroom."

The Global Editors Network is led by 24 media professionals across the world, including Mashable’s Jim Roberts and Wolfgang Blau of The Guardian. The group champions innovation and engagement as some of its foremost goals.

Hundreds of editors, hackers, writers and media execs will travel to Barcelona, Spain, on June 11 to 13, 2014, to hear from industry leaders, exchange ideas, solve problems and be rewarded for their work (see who attended the 2013 occasion here). But this year’s event, “Mobile. Video. Data. Challenge the Status Quo,” is designed to break new ground regarding the media industry’s newest technologies. Sessions and keynotes will revolve around the idea that mobile, video and data must be top-of-mind in the modern newsroom, and GEN’s international Data Journalism Awards will honor an up-and-coming sector of technological leaders.

Looking over the three-day GEN Summit schedule, a few sessions stand out. One session, “How to Reshape Your Newsroom Around Live Reporting and Video Sharing” will address live-blogging, streaming and commenting. A lecture from Reuters Institute for the Study of Journalism’s David Levy will explain the state of news consumption in ten countries as featured in the Reuters Institute Digital News Report.

Spot.us founder and Circa co-founder David Cohn plans to speak about digital trends, which will surely include some discussion on wearables and data analysis. In another conversation, “Are Journalists Becoming Journalysts?” representatives from Germany and Italy will teach the audience how to become a “classical storyteller, a social media manager and an algorithmyst.” Jim Roberts and other top editors will decide whether editorial and business ends of media organizations should still be separate. And Dan Gillmor, director of the Knight Center for Digital Media Entrepreneurship at Arizona State’s journalism school, along with Frankfurter Allgemeine Zeitung Publisher Frank Schirrmacher will chat on press freedom in the digital landscape.

Now back to the Data Journalism Awards (DJA), supported by the Knight Foundation and Google. The summit is announcing just eight winners, and they received 525 applications; these are going to be ones to watch. Last year, the Guardian US won a cash prize for its data-driven storytelling piece on gay rights by state. Reuters took home a win for a piece called “Connected China,” which “explains the social and professional network of China’s leaders” and took 18 months to research, design and create. Other winning projects came from the BBC, Argentinian publication La Nacion and smaller newsroom operations.

The Editors Lab Hackday brought together editors in Moscow. Photo courtesy of the Global Editors Network.

The Editors Lab Hackdays Final will feature competitors from all over the world who have excelled at some of the 18 “hackdays” the GEN hosted over the past year. Editor Lab Hackdays provide teams of three: an editor, designer and developer from respected international news organizations. They provide venues for conceptualizing and “building an innovating and content engaging editorial tool to develop their newsroom digital strategies,” according to GEN Business Development Manager Alexis Daninos. The tool could be an app or a digital news service.

Daninos said not to discount the social aspects of this year’s summit, either. Participants are encouraged to explore the city while there.

“Barcelona is great in the summer. The venue is very impressive: The CCCB is the contemporary cultural center of Barcelona,” he said.

Note: PBS MediaShift is a GEN Media Partner and MediaShift readers get a 30% discount on entry fees by using the promo code “Barcelona14” on the registration page.

The GEN Summit will be live-blogged, and the Twitter hashtag is #GENSummit. For more information on the summit and becoming a member of the GEN, click here.