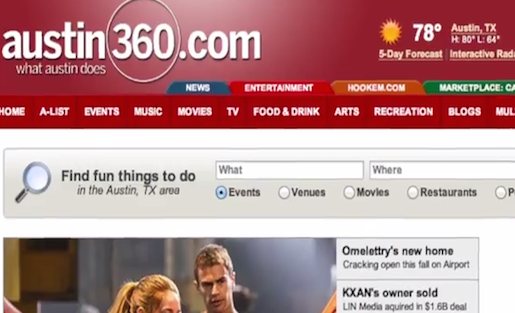 The Austin American-Statesman has developed its entertainment site Austin 360 for iOS and Android to help gather information about what Statesman readers want from their news experience, and what kinds of lifestyle events they're invested in.

This week we explore some new tools that push video from smartphones to television, and we see how one newspaper is working to turn entertainment listings into a real-world audience experience.

“What we’re trying to do is build an interactive experience between you and your television … The reason people pick up your phone every five seconds when you’re bored is because there’s new content coming to your phone. We want your television to do the same thing.” –Michael Linhardt, founder and CEO, AirCast Mobile
ADVERTISEMENT

A new app called AirCast Live enables users to send video clips and photos directly from a smartphone to an Internet-connected TV device anywhere the world. We find out how the system works from Michael Linhardt, founder and chief executive officer of Chicago-based AirCast Mobile, which created the app.
Reporting by Tatiana Darie.
[To skip directly to this segment in YouTube, click here.]

Other technologies enable a user to wirelessly display smartphone content on a television screen, but as TechCrunch explains AirCast is different because a user doesn’t have to be in physical proximity to the television onto which the content is being sent.

While a lot of new technology comes from small startups, established providers of newsroom systems also have integrated innovative tools into the process. As one example, Vizrt, whose graphics and workflow systems are used by many TV news operations, recently launched a mobile app that includes video editing, onscreen graphics, live streaming and maps. We learn about the app’s features from Bill Anderson, Vizrt’s vice president of North American sales.
Reporting by Paige Hornor.
[To skip directly to this segment in YouTube, click here.]

Vizrt recently demonstrated its latest technology offerings at the 2014 NAB Show in Las Vegas. For more on that, click here.

The company also offers another mobile app for anchors that allows them to control onscreen graphics from an iPad.

Several other companies also offer apps that enable video editing on a smartphone. For example:

A new entertainment-related mobile app from the Austin American-Statesman illustrates one way news providers might expand their value to users. Vice President for Innovation and Planning Steve Dorsey explains how the Austin 360 app fits into a larger strategy to build a brand that connects its audience to real-world experiences.
Reporting by Colin Hope and Reuben Stern.
[To skip directly to this segment in YouTube, click here.]