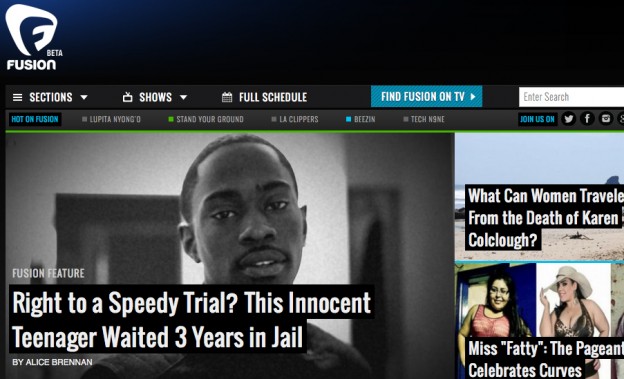 The front page of Fusion.net.

The news about Felix Salmon’s decision to leave Reuters and join Fusion.net threw a spotlight on this new digital venture of ABC and Univision. A few weeks ago I interviewed Fusion’s chief of digital, mobile and social platforms, Daniel Eilemberg. He talked about the target audience of Fusion — millennials —  and his other entrepreneurial venture, Animal Politico, in Mexico. This is an expanded version of an original post.

"Those of us from Latin America aren't 'Hispanics'; we're Mexicans, Colombians, Argentinians, but in the U.S. we're all considered Hispanics. People forget there are enormous differences, and you have to understand that in order to reach that audience." -Daniel Eilemberg

Daniel Eilemberg, founder of Animal Politico, is only 35 but has been an editor at several major business and news publications in the U.S. and Latin America. The Spanish-language site began three years ago as a Twitter feed and thrives on being at the center of social conversations about the news. It employs 20 journalists to report news for a Mexican audience in a way that is both entertaining and informative.

Eilemberg has taken the lessons of Animal Politico with him to Univison’s Fusion.net. In January he was appointed senior vice president, chief digital officer in charge of Fusion’s digital, mobile and social platforms.

“In Mexico, we cover topics about Mexico. In the U.S., we will cover global topics. In both places we are very focused on the audience of the millennials, the generation of 18 to 34 years old,” he said. “One of the big lessons we have learned in Animal Politico is how to generate engagement with them, how to generate dialogue with them around the news.”

I interviewed Eilemberg April 5 at the International Symposium on Online Journalism at the Knight Center for Digital Journalism in the Americas in Austin, Texas.

Animal Politico has captured an audience that is like millennials in the U.S — they distrust traditional media, they don’t visit news sites and they rely on social networks to get news and information.

“We launched Animal Politico on Twitter, and for a year barely made anything but barely spent anything. We wanted to prove the concept that there could be a brand that talked about politics and important issues and could connect with the younger generation. Once we had the proof that it would work, we invested in Animal Politico.”

The site’s traffic averages about 4 million unique users and 7 million page views a month. Eilemberg said that he expects it to achieve profitability this year.

More than half the traffic to Animal Politico comes from mobile devices, which has implications for Fusion. “This represents a fundamental change in how we think about the news, and how we create content, and in how we’re thinking about the next platforms that we use.”

Eilemberg, who is still listed as president on the Animal Politico website, believes his entrepreneurial experience is one of the reasons he was brought to Fusion, and he thinks it will help him in the new venture.  “We’re creating a media company, and it’s very important to have this entrepreneurial spirit, to know that it’s OK to make mistakes, to recognize when you’ve messed up and to correct things quickly.”

From Colombia to London

A native of Colombia, Eilemberg received a B.A.. in film and television production at the University of Westminster in London. He has served as an editor at Poder Magazine, a Spanish language publication on business and politics, Hispanic Magazine, and Loft Magazine.

He also produced the documentary “INSIDE: FARC Hostage Rescue” for National Geographic Channel, according to the bio issued by Fusion. He spent three years working in the creative department of Metro-Goldwyn-Mayer. He was recently a visiting Nieman Fellow at Harvard University.

Fusion’s target market will be young Hispanics. “The Hispanic market in the U.S. is huge and there are enormous opportunities,” Eilemberg said, “but one of the things that people forget, in particular media companies, is that this is a supremely diverse market.

“There are various countries represented with different traditions, cultures, food, music, language. Those of us from Latin America aren’t ‘Hispanics’; we’re Mexicans, Colombians, Argentinians, but in the U.S. we’re all considered Hispanics. People forget that there are enormous differences, and that you have to understand that well in order to reach that audience.”

Eilemberg was asked to give some advice to budding entrepreneurs. “Just do it,” he said. “The worst mistake you can make is not to try. Start small, test the idea, and once you show the idea is successful, everything will flow from that.”