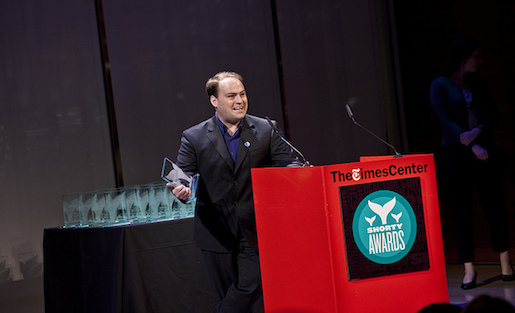 Veteran journalist Andy Carvin gained fame by using Twitter for blanket real-time coverage of the Arab Spring revolutions. Based in NPR’s newsroom at the time, Carvin led one of the most memorable examples of crowdsourced reporting efforts ever seen in the industry, collaborating with sources knowledgeable about the Middle East conflict and Arabic dialects, while simultaneously posting 140-character updates in real-time as citizens in Tunisia, Egypt and Libya protested their governments — and the world watched.

"I've never seen any of this as being about building a 'brand' ... I think sources trusted me because I was an active member of Twitter, just like anyone else, and tried to give as much back to the community as I took from it."

Carvin, whose official NPR title was senior strategist at the social media desk, quickly became known as the “man who tweets revolutions,” and even wrote a book about how social media has revolutionized journalism. His iPhone, used frequently to update followers during the Arab Spring event, has been donated to the Smithsonian.

Carvin’s work has built a name — you might even say a brand — for himself, and now he’s often put in the ranks of Ezra Klein, Nate Silver, Kara Swisher and others who have found success by the attention and notoriety they’ve gained as individual journalists. But Carvin says the forces at work in this rise of the individual journalist is about more than the “branding” — in fact, he doesn’t like that word at all.

Below is an edited version of a recent email interview with Carvin on that subject and others.

First things first: You were a pioneer in using Twitter as a real-time reporting tool. How did you think to do it, first with Arab Spring, and what was the reaction of your colleagues/superiors? Did anyone think what you were doing was crazy?

Andy Carvin: I really didn’t think of doing anything per se; there were a number of Tunisians I’d gotten to know over the years, some of whom I’d met in person. Then in late December 2010, I saw them tweeting about protests and was immediately taken with it. I’d traveled across Tunisia and had experienced the police there first-hand, so I was astonished the protesters were getting away with their marches and rallies. Then the police begin to crack down violently, causing the protests to escalate. So I just kept talking to Tunisians I knew and tweeted about it.

As far as my colleagues were concerned, our foreign desk seemed to appreciate the head’s up about what was going on there. When protests spread to Egypt, producers flying to Cairo said they’d follow my account and be in touch when they needed help. By the time Libya started, I’d dropped everything else I was doing, and NPR encouraged me to run with it.

How did you know that the conflict in the Middle East was the right story to live-tweet?

Carvin: I wasn’t looking for a story to live-tweet. I never figured I’d spend the next two years covering the Middle East. It just grew organically until it became a full-time obsession of mine.

How did the structure of NPR as a news organization help you build up your online brand?

Carvin: They were pretty much separate. I had been a blogger and online community organizer prior to coming to NPR, so I’d already developed a network of bloggers and activists around the world. It certainly didn’t hurt to be based at NPR, and I’m sure it opened doors to some sources. But at the time, I wasn’t a part of the newsroom, so what I did on Twitter was mostly running in parallel to what I was doing at NPR.

Also, I’ve never seen any of this as being about building a ‘brand.’ If that’s what I had set out to do, I doubt I would’ve had credibility among a lot of my sources. I think sources trusted me because I was an active member of Twitter, just like anyone else, and tried to give as much back to the community as I took from it. Listening to people and helping them when they need it goes a long way in establishing credibility and trust. If people want to call that as establishing a ‘brand,’ that’s fine, but that’s always felt a bit disingenuous to me.

Did you have any idea that you would get all the attention you did? What surprised you the most?

Carvin: Well, I’d been live-tweeting since 2007, and live-blogging for several years prior to that. Within the online community that cares about such things, I was an active member of it. It was just something I was a part of, something I did when I was online. So yeah, I was surprised by the attention it got. I think a number of people in the media were interested because they’d never seen someone do this before, but live-tweeting has been a staple of Twitter since the beginning.

You say you’re not a social media “guru” in your Twitter bio, but humor us with some tips. What are the top ways journalists can build their social media/online presence and thus, brand themselves, in your experience?

Carvin: First, by stop using terms like ‘guru’ and ‘brand.’ I’m serious. I can’t stand the term ‘social media guru’ because it devalues a person’s skills as a storyteller, reporter, etc. Do journalists like being known as telephone gurus or email gurus rather than a journalist? I doubt it. I think people keep using the word because they haven’t internalized social media as something that’s just a part of their profession. Once that happens, we can all go back to just being called journalists again. :-)

Being successful with social media as a journalist — it doesn’t require significant tech skills. It’s really about listening, sharing, building trust, being helpful to other people. The most important currency in social media is generosity. Be generous with your knowledge, your skills, your time, and people will eventually become generous with you as well. And you have to be open to admitting what you know and what you don’t know – exposing some of your vulnerabilities. That’s how you’ll build trust and a community over time.

Do you consider yourself a brand? Given the opportunities the web gives us to express ourselves/report news/share information, do you think personal brand journalism is the future?

Carvin: I think it’s a mistake to frame it that way. I think we should see ourselves as building communities around our work. We work to help inform those communities, learn from them, and figure out the world together, one story at a time. I’d rather think of myself as a journalist with a strong community backing my play, instead of a personal brand trying to increase page views and unique visitors.

After leaving NPR, what about joining First Look Media attracted you?

Carvin: This past September, I reached my seventh anniversary at NPR. It had been an incredible place to work, but seven years is a long time in social media — it’s like dog years. I just felt that now was a great time to try something new, given how many exciting things are going on at journalism startups all over the country.

Can you give us a sneak peek of what you’re working on as a Tow Center Fellow? When will be able to read your full report?

Carvin: The project I’m doing is called “Broken News.” It’s about the intersection of social media and broadcast journalism during breaking news – and the dynamic that plays out when reporting errors happen. I’m looking at several breaking news events as case studies — the Gabby Giffords shooting, Newtown and the Boston Bombing. I’ve collected thousands of tweets from each of these events and am piecing together how it all played out. I’m not sure when the results will be published, but I’m hoping to finish writing it by the end of spring.