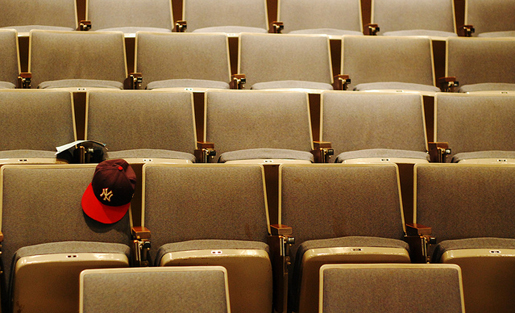 In journalism education circles, few people have spent more energy trying to bridge the academic and professional worlds than Eric Newton, senior adviser to the president at the Knight Foundation.

Newton’s recent digital book, “Searchlights and Sunglasses: Field Notes From the Digital Age of Journalism,” offers a “learning layer” of more than 1,000 lessons, resources and links for journalism educators in search of up-to-date class material. The book, which is free, sparked the creation of the PBS MediaShift microsite EducationShift: Moving Journalism Education Forward.

I have a keen interest in tracking best practices not only in the business of digital news, but in the teaching of the business of digital news. (I co-teach a Media Entrepreneurship course at Southern Methodist University in Dallas, and was a member of the inaugural class of Scripps Howard Journalism Entrepreneurship Institute fellows.) So this week, when I visited the Knight Foundation’s headquarters in Miami, I asked Newton for some of his thoughts about how journalism schools should approach teaching entrepreneurial skills. Here are some edited highlights from our Q&A:

Newton: People are not really familiar with what teaching hospitals do. I gave a speech in Amsterdam that explains this. The actual teaching hospital, it’s got an emergency room … clinics where people are cured … and laboratories where research is done.

The clinic side and the research side work together. They are inventing the new thing, but also doing the regular thing at the same time.

This zero-sum idea that [journalism schools] have got to be practical clinics or future and high-technology labs, one or the other, doesn’t help solve the problem, because the solution is both.

Given those dual missions, to what degree do you think journalism schools should be teaching students to set out on their own and launch their own news ventures and everything that entails, versus joining an existing news organization?

Newton: The main question is, what does every student need to know? And [then] what should students be able to learn if they want to?

Students need to know enough in the core curriculum so they can make an informed decision about what they want to do.

[In] an ideal curriculum, the students would know both how to transform an existing news organization and how to create new products.

But it’s hard to know whether schools of all sizes would be able to pull that off.

[Still] when you strip away the question of the kind of company and the size of company [and look at] the underlying skill set, it’s possible that the fundamental skill set is not really significantly different.

You should know something about media economics, whether or not you’re going to do your own company …

You should know something about business, about numeracy, about technology no matter which way you go.

Not everyone is going to want to run their own company … they should be able to if they want to. They shouldn’t go into a university that says it has a top journalism program and not come out the other end capable of doing a startup.

So the big arguments now are, what needs to be in the core – what does every student need to know – versus what you can make available as an option.

A certain amount of coding ability and numeracy is mandatory regardless of whether a student goes to work at a traditional company. A certain amount of, you might call it computational journalism — the ability to interrogate databases and interview algorithms — [is] a modern reporting technique that needs to be learned, somewhat beyond computer-assisted reporting.

Some young people have grown up with HTML and Javascript and just know how to do that … Others haven’t exercised their math muscles in that way and would need more prerequisites to be able to do it.

The issue is developing a 21st-century core that has all of the key skill sets someone’s going to need, whether they stay in media, or simply use the communication skills in the rest of society; whether they go to create their own companies, [or] if they choose to be a scholar and stay and study media.

It’s one thing to rip up the silos and to say, well, we’re not going to have a print track or a broadcast track – everyone’s going to learn digital things. Well, what digital things? What are the things you really need to know to do all we’re talking about? What is the true fundamental skill set … that allows [journalists] to bring to news and information the kind of added value that makes people want and need it more?

Your recent book “Searchlights and Sunglasses” sparked a conversation that led to the creation of EducationShift. How can #edshift support the goal of better equipping young journalists with entrepreneurial skills?

Newton: The power of new forms of media [is] increasing, and the speed with which the new developments are coming [is] increasing. So the old mechanisms for filtering best practices aren’t functioning as well.

There might be, for example, 200 new valuable digital tools for journalists. Where’s the Consumer Reports website for these tools that explains them all, that catalogs them, that rates them, that says, ‘Our panel of journalists tried this one or that one’?

The idea here was to try to make things more convenient for journalism educators by having a place that deliberately reached out to those other places to see what the best of what they were talking about was, and trying to bring it to a location so you wouldn’t have to look to eight or 10 or 15 or 20 different places to see pieces of the conversation.

If educators embrace it, it’ll evolve and improve. And if they don’t think that’s the best way to do it, then [we’ll] try something else.

This Q&A was conducted, edited and condensed by Jake Batsell (@jbatsell), an assistant professor of journalism at Southern Methodist University, who is spending the 2013-14 academic year as a Texas Tribune Fellow based in Austin.