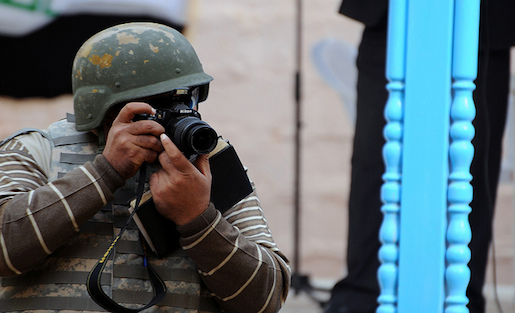 An Iraqi photojournalist takes a photograph of local dignitaries on Nov. 20, 2008. Photo by Staff Sgt. James Selesnick on Flickr and used here with Creative Commons license.

These words are too often attached to any mention of Iraq these days.

"Reporters Without Borders, which has been closely monitoring targeted killings of journalists in Iraq, found the past few months to have been particularly deadly, with at least 10 media personnel killed in attacks by Jihadi groups."

The reported death toll in this war-torn country reached over 1,000 in January 2014 alone.

Journalists have been, and continue to be, among the casualties. In the first of 2014, Firas Mohammed Attiyah, a 28-year-old freelance reporter for Fallujah TV, was killed in a bomb attack on Jan. 20 while reporting on ongoing clashes in the restive province of Anbar.

Iraqi security forces and allied tribal fighters have been battling Islamic militants and anti-government tribes in Anbar for over two months now, with almost no independent reporting coming out of the province.

Given the climate of rising violence in the country, it is surprising that being caught in the crossfire has not been the greatest risk to journalists’ lives. According to research by the Committee to Protect Journalists (CPJ), the majority of journalists reported to have died in the past decade were killed in targeted assassinations — in direct reprisal for their reporting.

Iraq was ranked deadliest in the world for press members for the fourth straight year in 2011, according to CPJ. The index calculates unsolved journalist murders as a percentage of each country’s population.

Reporters Without Borders (RSF), which has been closely monitoring targeted killings of journalists in Iraq, found the past few months to have been particularly deadly, with at least 10 media personnel killed in attacks by Jihadi groups.

In the second week of January, two Iraqi journalists were badly hurt in separate incidents but managed to survive the attacks.

Al-Mosuliya TV cameraman Salah Nezal was reporting from the city of Mosul on Jan. 12 when he and his driver were seriously injured by a bomb planted in the back of his car. According to RSF, they are both in recovery.

Sharqiya News reporter Saif Talal was driving in the Diyala province on Jan. 18 when unidentified gunmen repeatedly opened fire on his car, seriously injuring him.

In the most recent attack on the media, on Feb. 10, five days after the Al-Sabah Al-Jadeed independent newspaper published a cartoon portrait of Iran’s Supreme Leader Ali Khameini to mark the 34th anniversary of the 1979 Iran revolution, the newspaper’s downtown Baghdad headquarters was bombed causing significant damage, but no injuries.

The cartoon was regarded by many as an insult to the revolution and to Iraq’s Shiite population, leading demonstrators to gather outside the newspaper’s office to demand an apology. Although an apology was published on Feb. 9, hostility against the newspaper did not wane.

“Targeting a newspaper in this manner is unacceptable,” Reporters Without Borders said. “After being alerted by the newspaper’s management the day before the bombing, the authorities should have taken the necessary measures to protect its premises and staff, and to make it clear to the demonstrators that there was nothing illegal about the cartoon.”

A Call For Change

The Arab Network for Human Rights (ANHRI) joined RSF and CPJ in calling on Iraqi authorities to provide a safe climate for journalists to operate in. Iraq’s Interior Ministry must begin by prosecuting the culprits, stated ANHRI.

For six consecutive years, Iraq has topped CPJ’s Impunity Index, which calculates unsolved journalist murders as a percentage of each country’s population.

Although those targeting journalists are usually terrorists or illegal militias, the government’s failure to identify and capture perpetrators is a huge factor in the crisis journalists face today.

Hiba Zayadin reports on issues of free expression in the Middle East and North Africa for IFEX. She has previously worked at the Jordan Times, Jordan’s english daily newspaper, served as co-editor of Alternatives, an online journal which covers international issues and human rights and freelanced for JO magazine, a leading social and cultural English magazine in Jordan.