How to Pitch and Pay for a Mobile Reporting Class 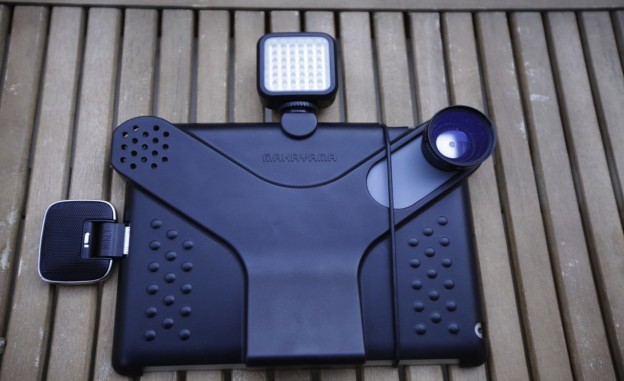 Students at the University of New Mexico will use a mobile reporting kit similar to this one in a class this fall. The iPad mount connects to a tripod and allows a light and lens to be connected as well. On the left is an external microphone.

One of the things I enjoyed about reading Searchlights and Sunglasses by Eric Newton during winter break was hearing about some of the interesting projects that have been funded over the years by the Knight Foundation, through both the Knight News Challenge grants and the Knight Lab at Northwestern University.

Examples include Document Cloud, Ushahidi and TimelineJS, which all received money for ideas that turned into projects that help collect or disseminate news and information in new ways.

Students have these tools in their pockets and purses, so why shouldn't they learn how to appropriately use them in a journalism setting?

As a fairly new adjunct journalism instructor at the University of New Mexico in Albuquerque, I found the scope and ingenuity of these projects inspirational enough to push me to try something new at my alma mater.

In the past three years, I’ve taught news writing, newspaper practice and digital ethics classes at UNM, but my broader interest is in journalism and technology. As part of moving my teaching in that direction, last year I wondered if I could persuade the department to let me teach a class on mobile reporting. Colleagues in the department and elsewhere encouraged me to draft a syllabus and see what might happen.

Using resources I found online from professors, including Judd Slivka at the University of Missouri School of Journalism, as well as other things I had learned in person at Poynter’s Teachapalooza seminars in 2012 and 2013, I put together a plan and waited. The idea became part of my New Year’s resolution to pitch new special topics classes each semester and see where they go.

In the meantime, I knew the department didn’t have the equipment or money for a mobile reporting class. And while I don’t mind lending things including my own iPhone and iPad to students, I knew we were going to need a bunch of mobile reporting kits for students to use throughout the semester.

Where to find money?

To start the possible funding process, I did a survey of journalism students to see what tablets or phablets or phones they had, if any, and whether they would be willing to use them for a class. Of the 29 students who responded, 27 said they would take a class in mobile reporting if they had access to equipment that wouldn’t require them to use their own data plan or minutes — a key concern when dealing with data-heavy video and audio. The number of interested students sounded promising in terms of getting the class filled. But where to get the cash for equipment?

I’ve heard stories over the years about newspapers that have contributed money for equipment to universities. But knowing a bit about the local newspaper scene here, I guessed that was unlikely in our case.

My next step was to think of what other organizations might have money and might be willing to give it with no expectations in return, at least in terms of the stories students might create with the equipment.

I decided to approach the New Mexico Press Association with a proposal, seeking about $6,000 to fund 10 mobile reporting kits. As part of the process, I submitted a Google Slideshow proposal detailing the equipment I had in mind and emphasizing why students should learn new digital skills. I focused on the idea that if students learn this technology in college, they can take that knowledge to smaller papers around the state.

To deal with the data use by students, I opted for the iPad minis, which will use the university’s free wireless and sidestep the cell phone or tablet data plan conundrum.

While I’m still waiting for a decision about the funding proposal, I’m set up to teach the class this fall, in part because I was able to collaborate with a professor in the university’s Interdisciplinary Film and Digital Media Program. The class will be cross-listed, so students in that program can join journalism students in taking the course as an elective, and the digital media program will provide lab space and some equipment for the class.

As a reporter, I love tools like the Canon Mark ii. While DSLRs that shoot video are smaller and less expensive than professional video cameras, they still represent something many journalism students cannot afford and perhaps are not interested in using.

The reality is that many students and journalists opt instead to use smart phones and tablets for the images, video and sound they will produce for news outlets.

Setting aside comparisons of quality and debate on what smartphone and tablet photography mean for journalism, I’ve decided to embrace the trend, at least as an idea I want students to learn. Students have these tools in their pockets and purses, so why shouldn’t they learn how to appropriately use them in a journalism setting?

In New Mexico, teaching such technology is also a way to connect with students from lower-income households who might have a smartphone but not a DSLR. The class offers an opportunity for underrepresented students to learn how to use the tools they have for stories that news outlets need.

To give students a strong foundation, the first few weeks of the class will include lessons on reporting ethics, basic storytelling approaches and good journalism. Those principles don’t change because the technology changed.

Beyond that, the class involves teaching the technology that allows students to report, edit and produce in the field, a skill set that is perhaps as valuable as — if not more so than — being able to provide more traditional reporting using larger and more expensive equipment.

I’m excited to see what they produce.

Kate Nash Cunningham spent almost 15 years as a print reporter in New Mexico before becoming an adjunct instructor at UNM, where she also works as the writing coach for the independent student newspaper. She is scheduled to finish her master’s in digital journalism and design this spring at the University of South Florida St. Petersburg. Follow her @katenashnm.