A Short Guide to the Internet’s Biggest Enemies 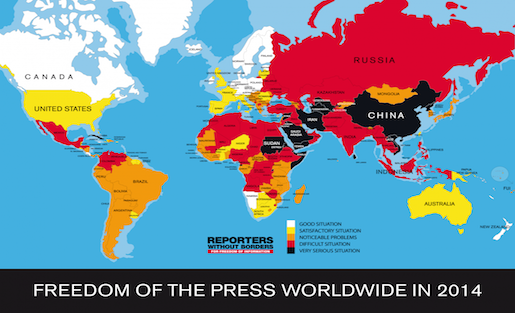 This map uses color to indicate levels of press freedom across the world. Image courtesy of Reporters Without Borders.

Reporters Without Borders (RSF) released its annual “Enemies of the Internet” index last week — a ranking first launched in 2006 intended to track countries that repress online speech, intimidate and arrest bloggers and conduct surveillance of their citizens. Some countries have been mainstays on the annual index, while others have been able to work their way off the list. Two countries particularly deserving of praise in this area are Tunisia and Myanmar (Burma), both of which have stopped censoring the Internet in recent years and are headed in the right direction toward Internet freedom.

In the former category are some of the world’s worst offenders: Cuba, North Korea, China, Iran, Saudi Arabia, Vietnam, Belarus, Bahrain, Turkmenistan, Syria. Nearly every one of these countries has amped up their online repression in recent years, from implementing sophisticated surveillance (Syria) to utilizing targeted surveillance tools (Vietnam) to increasing crackdowns on online speech (Saudi Arabia). These are countries where, despite advocacy efforts by local and international groups, no progress has been made.

"While the U.S. government doesn’t censor online content and pours money into promoting Internet freedom worldwide, the National Security Agency’s unapologetic dragnet surveillance and the government’s treatment of whistleblowers have earned it a spot on the index."

A third, perhaps even more disheartening category, is the list of countries new to this year’s index.  A motley crew, these nations have all taken new, harsh approaches to restricting speech or monitoring citizens:

The RSF report breaks down the institutions that pose the biggest threat to Internet and press freedom in each country on the list.

Russia: As RSF writes, Russia has been on a downward slope for more than a decade. Until fairly recently, however, the Russian government did not directly censor the Internet, preferring instead to employ subtle strategies to control online discourse. In 2012, that changed, when the Russian Duma overwhelmingly passed a bill allowing the creation of a national blacklist of websites. Today, that blacklist continues to grow, while the government continues to seek new ways of limiting online speech.

Pakistan: We’ve expressed concerns about Pakistan many times before, so we’re glad to see the country called out for its repressive behavior. Despite significant opposition from inside the country, the Pakistan Telecommunications Authority continues to add sites to its opaque blacklist, most notably YouTube, following the ‘Innocence of Muslims’ debacle in 2012. Efforts from local activists have also demonstrated the willingness of foreign companies — in particular Canadian company Netsweeper — to aid in Pakistan’s repression of speech.

United States: This is the first time the U.S. has made it onto RSF’s list. While the U.S. government doesn’t censor online content and pours money into promoting Internet freedom worldwide, the National Security Agency’s unapologetic dragnet surveillance and the government’s treatment of whistleblowers have earned it a spot on the index.

United Kingdom: The European nation has been dubbed by RSF as the “world champion of surveillance” for its recently-revealed depraved strategies for spying on individuals worldwide. The UK also joins countries like Ethiopia and Morocco in using terrorism laws to go after journalists. Not noted by RSF, but also important, is the fact that the UK is also cracking down on legal pornography, forcing Internet users to opt-in with their ISP if they wish to view it and creating a slippery slope toward overblocking. This is in addition to the government’s use of an opaque, shadowy NGO to identify child sexual abuse images, sometimes resulting instead in censorship of legitimate speech.

India: A country that has long censored certain types of speech, it’s surprising that India has never made it onto RSF’s list before. Still, in the past two years, things have gotten significantly worse as the Indian government has enacted new laws to limit online speech and has slouched toward the NSA at a time when its neighbors have spoken out against surveillance.

Ethiopia: The African country has been on a downward spiral for the past few years, blocking VoIP services, sentencing bloggers to long prison sentences and enacting laws to block online content. Most recently, EFF filed a lawsuit accusing the Ethiopian government of installing spyware on the device of an American citizen of Ethiopian origin. In a similar case, Privacy International filed a criminal complaint alleging the use of FinSpy on the device of a UK resident.

Since 2011, RSF has been researching and producing the Enemies of the Internet report annually.

There are a few countries that were left out of this year’s index that we think should have been included. These nations have all taken a turn for the worse in recent years:

Turkey: Although Turkey has shown up on RSF’s watchlist before, and despite a spate of arrests of social media users during last summer’s protests, Turkey managed to stay off this year’s index. The country has come under fire from human rights advocates for its online repression, and in 2012, the European Court of Human Rights found that Turkey had violated its citizens’ right to free expression by blocking Google sites. Turkey is definitely an enemy of the Internet.

Jordan: Despite local protests and international opposition, in June 2013, Jordan initiated a ban on more than 300 news sites that refused or failed to register with the Press and Publications Department. Those sites remain blocked.

Morocco: The North African nation’s approach to the Internet had improved somewhat in recent years, with the government unblocking sites that were formerly censored. The arrest of journalist Ali Anouzla in September 2013 and subsequent blocking of Lakome, the publication he co-founded, however, seems to signal a new era. Activists have expressed concern that bad legislation is just around the corner.

We urge the countries that find themselves on RSF’s “Enemies of the Internet” list this year — as well as those that are glaringly missing from the list — to take note of countries, such as Tunisia and Myanmar (Burma), that have taken steps to ameliorate violations of Internet freedom and remove themselves from RSF’s annual index.